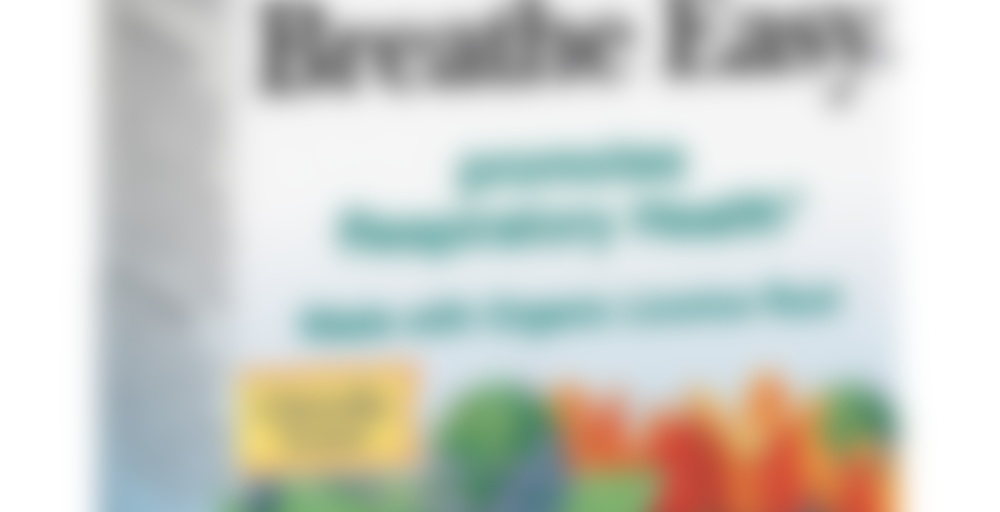 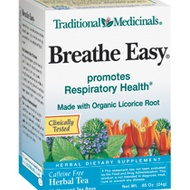 by Traditional Medicinals
58
You

Personality
Wise and lively, a breath of fresh air.

Reason to Love
One of our original formulas, Breathe Easy tea has been supporting people for nearly four decades. This enduring classic combines the best of Western herbalism with ancient Traditional Chinese wisdom resulting in a unique blend that warms and engages the senses. Eucalyptus, fennel and licorice are combined with Bi Yan Pian extract, a traditional Chinese formula of 12 different herbs. We love this aromatic and fragrant blend that soothes with its warm and spicy taste.

One of our sources of eucalyptus is from Chile, where the leaves are carefully harvested to preserve the essential oil—which is responsible for the characteristic aroma and taste of eucalyptus, which you’ll notice as you steep this tea. Our formula also includes the traditional Chinese herbal blend Bi Yan Pian (bee-yahn pee-yahn), which features the ancient magnolia flower. Evolved before bees existed in the world, magnolia flowers developed to encourage pollination by beetles, and have been used in Chinese and Japanese herbal traditions for centuries.

I get much more sweet than bitter from this, but I do get a little astringent feeling on the tip of the tongue, like I licked a reed. I’m not drinking it for pleasure and yet it is pleasurable. I’m sure it helps that I like licorice root. This, Throat Coat and Gypsy Cold Care all taste very similar to me, but Throat Coat is thicker and smoother and Gypsy Cold is more flowery (yet not floral like jasmine or orchid, more like chamomile) and this is more herbaceous, but they all have the same spice and licorice. We’ll see how it helps.

I’m almost out of my medicinal Bronc-Aid tea (which really isn’t so bad though I don’t think I’d ever drink it for fun) so I figured I’d pick some of this up as a replacement since it was available and the store I was at had no Bronc-Aid.

Can’t say I’m wild about this. It’s not bad (though, okay, the first sip I did make a face – there was some sort of bitter end note that flashed by and thankfully didn’t repeat in later sips) but I wouldn’t go so far as to say that this is good.

Licorice is the strongest taste and that makes it not so bad since it adds some sweetness to the tea. But it’s pretty much the only flavor in the aftertaste and it’s pretty cloying after a few minutes. I’m getting pretty tired of it. Tea (or even not-tea) doesn’t usually leave me with the urge to chew gum unless I use sugar and milk in it.

Aside from licorice, there’s a bit of herbal-ly green darkness to it that is probably the peppermint and eucalyptus but it isn’t strong enough to come across as mentholated or whooshy (which I was kind of hoping for). My mouth does feel a bit cooler, so perhaps that is the mint and eucalyptus in action. Still, could have used more in the flavor.

Honestly? Not all that tasty. It’s kind of bland and flat and I really wish the flavor wasn’t licorice so dominated. At the same time, the sweetness from the licorice (and the way that seems to coat my mouth) is probably the only reason I didn’t keep making faces as I sipped.

I think I’ll see if my mom wants to share this box with me so I can get rid of it a bit faster. I’ll either go back to my cat-urine-smelling-but-not-bad-tasting Bronc-Aid or try the Yogi Teas lung-ular focused not-tea.

A favorite tea for colds so far.

I like how this one has such a sweet aftertaste. When I saw “breathe easy”, I automatically thought bitter, sharp flavors to open up sinuses. But this one did the trick without that, so I was happy about that:) The only thng I wasn’t a fan of was how it eventually tastes sort of bland…even though it is sweet, it’s very light and there’s not much to it than that. Overall though, I’ll enjoy the box I have but probably won’t reorder.

I got this tea on the recommendation of another Steepster after I reviewed Yogi’s Breathe Deep tea, and as such I cannot help but compare the two.

I found this tea to be all right, but frankly a bit bland, especially after drinking the Breathe Deep. It also has a slight but noticeable bitter undertaste to it. The packaging recommended adding honey, which did eliminate the odd undertaste and make the tea smoother and a little richer. While Breathe Deep has a very strong licorice and eucalyptus flavor and smell, Breathe Easy is much, much lighter on both.

I did not notice the almost immediate easing of my tightened airways with Breathe Easy that I noticed with the Breathe Deep, though I think it did help some.

Ultimately, although this is an okay tea, I won’t be buying any more because I like the Breathe Deep so much better. However, for those who don’t like the strong flavoring in the Breathe Deep, Breathe Easy may be a good choice. It’s not bad; it’s just not, well, my cup of tea.

Nasty head cold, been sick for 4, going on 5 days now.
This tastes terrible unless you add liberal amounts of honey.
The first time I made it, it tasted like full-on onions. No idea what happened there.
The other few times I made it, it tasted like herbal, medicinal mush.
What else would you expect though?
I dunno how well it works either, besides providing the same benefits that any hot tea beverage does when one is sick.
Overall, not worth the investment.

Thank you :) My neti pot and nasal spray are my best friends today

Dry bag smells more of licorice-fennel followed by eucalyptus-mint. The steam is lightly minty and medicinal. First sip is of course syrupy sweet, earthy licorice which is mixed with eucalyptus, then the fennel opens up, followed by a light coating of menthol that floats up. There’s also some tartness at the back of the mouth a while after the sip.

Compared to Yogi’s Breathe Deep, this isn’t nearly as sickeningly licorice sweet and the licorice doesn’t glue itself into weird pockets of flavor around my mouth. It’s more of a smooth coating unlike the Breathe Deep which left a dry eucalyptus-herbal strip the length of my tongue. I do appreciate the stronger eucalyptus-thyme presence in Breathe Deep. Taste-wise, though, this Breathe Easy is preferred.

Pros: The taste here isn’t so cloying as the Throat Coat. It just has a general herbal medicine taste.

Cons: It’s pretty obvious that Throat Coat soothes throats, at least temporarily. I never noticed any effect from this one. Didn’t do anything for my congestion.

I have way too much of this. I got it for cold care treatment. Helps, but no panacea. Otherwise medicinal and herbal. The other reviews are accurate for this tea.

This is my second herbal “health” tea today. As it’s steeping, it smells strongly of anise and mint. The scent is anise but it tastes like straight licorice. I actually gave an involuntary shudder on my first sip. I enjoy licorice candy on occasion, but I have not been a fan of it so far in my tea. This reminds me somewhat of Throat Coat but this one is more tolerable. I’m still fighting a headache and neck aches this morning so maybe all of these healing herbs will help.

Since trying Echinacea Plus at work before I decided to by a “Cold Season Sampler” off of amazon from Traditional Medicinals. I’m not sick, but I tend to like teas that are beneficial to you when sick (plus it is always good to keep some of those teas around!).

This tea tastes primarily of licorice root with a slightly spicy and medicinal aftertaste.Not something I would drink for the taste, but I can see this being quite soothing when sick.

I love licorice teas which is funny because I hate actual licorice! I think it’s that wonderful aftertaste that’s so soothing.

That’s EXACTLY me. I think that there is a big difference between licorice root/anise seed and black licorice though. Bleh.