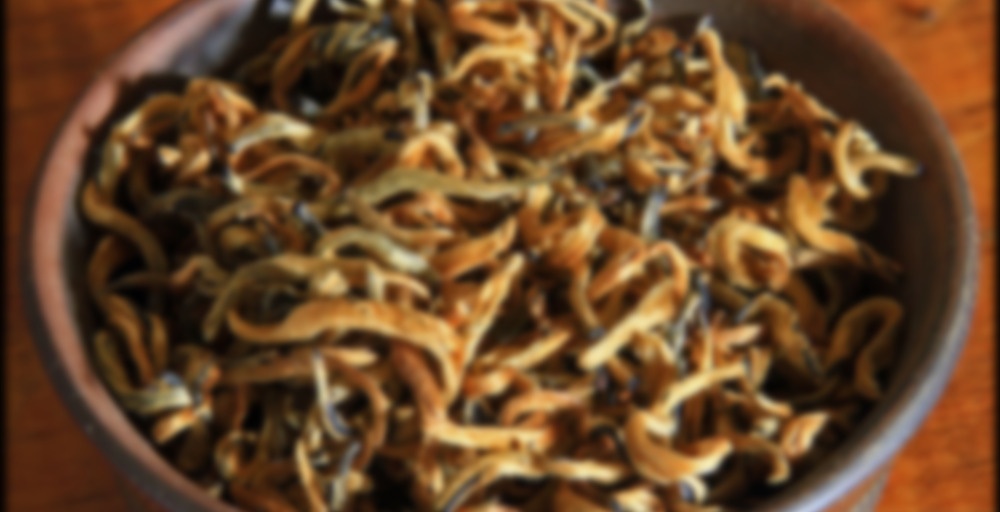 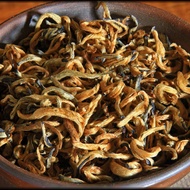 by Whispering Pines Tea Company
87
You

with 43 Ratings Rate this tea Rate This Tea

About the Tea
This is the highest grade black tea that you will find outside of China. Centuries of knowledge and tea master perfection went into picking and processing this dazzling Dian Hong style balck tea! The appearance alone is enough to knock you off your feet, with golden hairs covering the velvety soft leaves!

This tea is harvested in the spring from ancient tea bushes in Yunnan, China and carries lovely complex notes of malt, cocoa, warm pinewood, honey, morel mushrooms, and a damp forest aroma. This years harvest of this fantastic tea is smoother than previous harvests, with a new pinewood note comparable to warm wet pine after a summer storm. Imperial Gold Bud Black Tea is thick and lively with a clean aftertaste and carries an intense energy (cha qi).

We are very proud to be able to offer small quantities of this rare tea and will continue to offer Imperial Gold Bud as long as mother nature allows!

How to brew the perfect cup:
Steep 1/2 tablespoon of leaves
in 8 ounces of boiling water
for 3 minutes.

This has a beautiful golden appearance that suggests quality. The instructions said to use 1/2 tsp, but I used my standard 1.5 grams (though increased the water to 8 oz from my usual 6).

This was an amazing tea. I was initially hesitant at the Yunnan-like damp forest aroma, but there was an underlying note of cocoa, and I didn’t find it off-putting. The flavor is HUGE. I won’t use as much next time, yet the strength was wonderful: a big, complex, mouth-filling tea. The flavor changed subtly in my mouth and as the cup cooled, making it hard to identify specifics, but it retained the forest/cocoa notes in the nose. The finish was also delightful and strong. A great tea.

There is only about 5 grams left in the box, but I’m afraid I’m claiming it.

I should probably give this a 100, but I’ve always been a tough grader.

Boiling 3 min, 0 sec
Yours I Like This
7 likes
1 comments
Edit

Hey Doc! Glad you enjoyed this! :)

I think (unless I was totally out of it and messed up) that the instructions called for 1/2 tablespoon rather than 1/2 teaspoon. This tea also was a reserve tea but as of today has been moved up to a regular stock item, and can be found here: http://whisperingpinestea.com/yunnangold.html

The one you had and the one currently offered is a 2012 harvest. When stock runs out of the 2012 we will be replenishing each fresh harvest. :)

Glad you enjoyed this and had a good first impression of Whispering Pines!

Well…this weekend turned out quite different than planned. My boyfriend and I were set to leave to visit his mom for a week. The first time since I started working that I could take Christmas off. We were renting a house on the beach, and I was very much looking forward to it.

Cue COVID exposure at work. Boyfriend’s mom is immunocompromised, so we couldn’t risk exposing her to something. Had to cancel the trip. We both got negative results back, but I’m feeling sick. Boo COVID. We are both vaccinated and boosted.

So, I am still taking the week off of work and planning on drinking lots of tea.

Gosh that sucks. Hope you can work in some Zoom call time in between cups of tea, even though it feels like we’ve been on a zoom call for 2 years lol.

Oh gosh, I am so sorry to hear that! I hope you have something other than Covid and it goes away really quickly!

Yikes and boo! That is crappy just when a nice break was so very close. Good on you for doing the right thing. Hope whatever you have is not COVId and that it passes easily and swiftly.

And yay for good tea.

Wishing you a speedy recovery with lots of wonderful tea <3

Large, full golden brown leaves. Nice aroma.
Tastes similar to Keemun Snail, which I like a lot. Earthy, bread-ish, not sharp. dark golden brew after 60 seconds (I don’t steep too long, I never add anything to my tea).

From the stamped bag era.

This tea has not aged well.

A lovely treat for Christmas Eve! The dry leaf is lovely…downy golden curls with a rich earthy aroma. The flavor is rich and full-bodied with notes of cocoa, malt, and baked bread. It also resteeps beautifully!

I’m so guilty. I never (or almost never) follow the steeping instructions listed on a bag of tea. I have found a few things that seem to work and I’m such a creature of habit that I never want to try something different. This tea is no exception. It recommends a half teaspoon of leaves steeped in boiling water for 3 minutes. That didn’t happen. In fact, I goofed on this one completely, adding too much water and not enough leaf.

Just to make a quick note about the leaves – they are beautiful. Golden yellow, fuzzy, soft, fluffy. Really so nice. As I mentioned, I botched this cup so it is very light in color and in flavor. I’ll have to give this one another try later.

It’s a rainy, gloomy day here today (I saw snow, though it didn’t stick thankfully!) and I feel so bleh with the ladytime pains I don’t feel up to housework, so I thought I’d do a little gong fu session with one of my old teabox teas (I really need to work on finishing those samples off!) This is the last black sample I had from the Here’s Hoping Traveling Teabox, so thank you to tea-sipper for organizing and to all those involved in that box for sharing their teas! I had a 2.3g sample and prepared it in my baby sized gaiwan.

The session lasted ten steeps, and I’ll admit I was surprised at the longevity of a black tea that had to be incredibly old at this point, as I rarely get such longevity even from fresh blacks and oolongs. My first steep ended up much longer than I planned, since I forgot how incredibly hot the little ceramic baby gaiwan is (I’m used to “cheating” with gong fu by always using my shiboridashi which is much easier to handle when it comes to heat retention and not pouring boiling tea all over my fingers). It had an aroma of orange peels, mandarins, and raisin bread, with a strong baked bread aroma present on the top of the cup, and the flavor of the tea was a strong pithy orange peel citrus note, with a less prominent lemony citrus note that produced slight puckering toward the end of the sip, as well as notes of malt and raisin bread, with a rather prominent astrigent/drying sensation on the top of the mouth. The second steep was less pithy with a more fruity and balanced orange flavor and a little stronger in the lemon note, with the malty notes also rounding out a bit and some florality becoming more present, but the tea was still quite astringent. On the third steep I overfilled my gaiwan to its limits of 60ml which made it extremely difficult to pour but noticed the extra water mellowed the tea out, with the malt/citrus/floral notes rounding out and the tea not having the bitter astringent bite on the finish, so the fourth steep I removed a few leaves out of the cup so I could fill it comfortably again at around the 40ml mark and got a flavor on par with the third steep, and the tea even seemed to have some rose florality pushing forward. It seemed some of the astringency was due to having too much leaf-to-water and now, while a bit drying after the sip, it was no longer unpleasant in any way. Most of the rest of the session continued with the tea reminding me of marmalade toast, with a bit of rose florality cropping up from time to time.

Considering the age of the tea sample, I was impressed with how much I got out of it, and had a nice, warming session on an otherwise dreary afternoon.

88
Recommended
Maddy Barone
724 tasting notes
My small autumn order from Whispering Pines came today and this was included as a sample! The name on the packet was Imperial Gold Buds, but the description matches this one, so I assume it is the same. I’ve enjoyed every tea I’ve had from Whispering Pines. The quality is excellent. My favorite breakfast tea is North Winds. I really loved Golden Orchid. Cocoa Amore was delicious. This one is fantastic. The mouthfeel is silky smooth. There is not a hint of any acidity or bitterness. The tea is a beautiful shade of amber in the cup. I am not an expert on teas like some Steepsterians, but it seems to me the quality here is exceptional. I think I’ll need to hoard the rest of this sample.

I have recently realized that any of those black teas with any gold in the leaves at all should be enjoyed fairly fresh. I feel like golden black teas lose a TON of flavor as it ages, probably more than any other type of tea. That gold goes from very complex tasting to very flat. (I’m not saying this will happen with this tea, but most gold teas I’ve had do this.)

I mention this because you mentioned hoarding it :D

Hmmm… Maybe I should grab this excuse to drink it up fast! LOL

Oh my, such a good cup of tea!

Here’s Hoping Teabox – Round Seven- Tea #34
The tasting notes for this one are so complex, but I was only tasting the lightest of flavors here. I think these types of golden yunnans are VERY delicious when they are fresh but I think they are the most sensitive tea to aging, as they seem to lose their flavor very fast and end up tasting like cardboard (the other teas most sensitive to age seem to be green teas and definitely Darjeelings). I’m sure this is delicious when fresh, but I’m only tasting light honey notes.