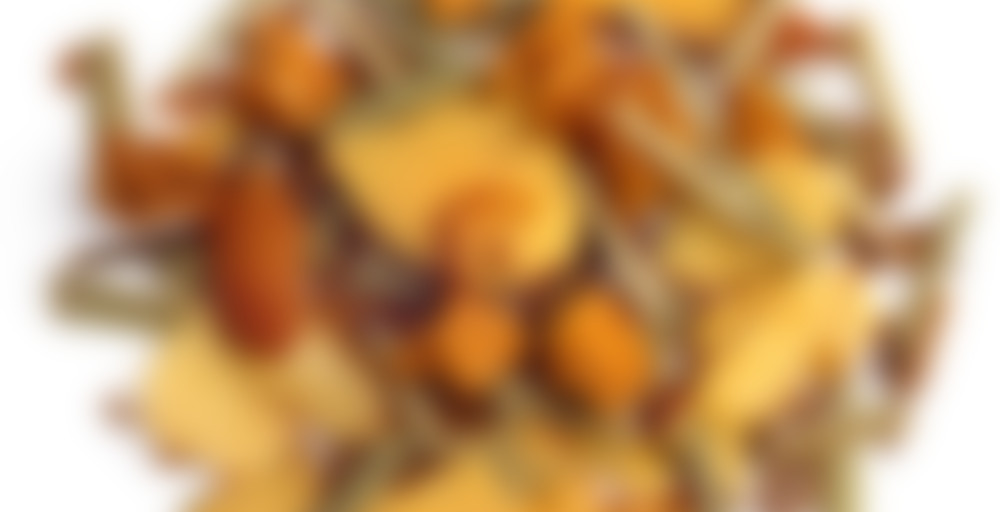 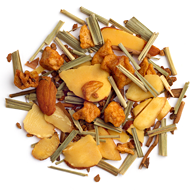 with 42 Ratings Rate this tea Rate This Tea

Get fired up
Playing in the snow can be pretty hard work. You’ve gotta stay energized. Focused. Warm. So, what’s in your thermos? How about this blend of green tea, apple, cinnamon, and almonds? You get all the benefits of green tea plus all the sweet, creamy flavour of a caramel apple. Pack some to go and you’ll really heat things up on the toboggan run. And with a tea this delicious in your hands, you’ll never want to come in from the cold.

I picked this one up in the good old days, and by that I mean the time when people thought coming home with ten different samples from DavidsTea was ridiculous! If only they knew then… Anyways, I remember being told that this one was supposed to taste like a caramel apple, and although I found it ok, I don’t remember it being a favourite by far. I had it earmarked to do a quick comparison to DT’s Mom’s Apple Pie, so figured tonight was as good a night as any! Sadly, neither of these is a sipdown; there’s still one cup left of this one, and lots of the other.

It’s funny, I took a sniff of this one, and could have sworn it was Mom’s Apple Pie! That’s how it smells, like warmed cinnamon apples with a bit of crust. And really, flavourwise, it tastes rather like the aroma. A bit heavy on the crust (which is probably the… almonds??), but definitely like apple pie. I’m not getting any caramel, so wouldn’t call it caramel apple, but the light cinnamon and fruitiness combined with a really distinct buttery crust flavour is 100% apple pie. The only problem is that it’s kind of weak. I suppose the tea is over 6 months old, but it has been stored properly, so maybe my leaf/water ratio is just a bit off, or maybe it needed that extra three minutes that I so cautiously didn’t give it. On second thought, I see the package directions indicate using 1.25 tsp, and I used a generous 1.5, so maybe it’s just meant to be on the weak side. This is nice though, and the aroma is very soothing.

ETA: Third infusion a day and a half later is heavy on cinnamon aroma (but not flavour), and mostly tastes nutty. Not bad. This one’s growing on me, but I probably won’t ever see it again since it’s online exclusive, and I don’t want 50g of it!

Mm.. this sounds delicious, although the green tea they use looks … interesting. Does DavidsTea give a lot of in store samples?

Oh, I just purchased a sample size :) They will sell you as little as 8g of tea. They do sample two teas daily (brewed up) though, which are free. I don’t think there’s much green tea in this one, but there is lemongrass.

Interesting. I didn’t get the caramel notes as discribed. My first reaction was that it tastes like a sort of light cider. Definitely something you could enjoy on a cold snowy day. Still usually on such days I prefer that which a bit heavier and this is clearly light. I got this as a sample from David’s Tea so I don’t have any more to experiment with but I imagine if made stronger with more tea and longer steep time perhaps I could have added honey and maybe a little milk but that would be reaching for me. Nevertheless, it was alright and I imagine I will not be trying this again because if I wanted to I’d have to purchase it unless they send me more with another order and I simply didn’t like it enough to order more.

I dislike this one. Blech

Wasn’t my favorite either. There are better cidery teas.

I agree guys. I will say though I desperately want to order from David’s again. Even made a wish list. Trying to resist the temptation.

Hahahaha, you should swap with someone with a whole whack of them instead (like me!)! Unless your list is full of favourites you want to restock :)

Rachel—I can totally swap some teas with you! I really need to create an excel spreadsheet with all of the davids I have. I have way more than what’s in my cupboard on here.

It’s a great idea Krystaleyn and Erin, except honestly I don’t have many. I just started buying them. However, if I start collecting a lot I’ll definitely consider swapping. Most that I had tried previous were from swags which got me buying them now. :)

Chosen for medicinal purposes…I have the plague, and was trying to nap, so I didn’t want something too caffeine-y, but something with spice for my sinuses. Ear pressure got too bad though, and I had to get up. It’s good for this. I’m glad I have some. Thanks again to ShayneBear for this sample.

I can see what it was maybe trying to taste like… but to put it in few words, I couldn’t even finish my cup.

Anyways, something in the cinnamon.. apple.. crumbly type flavour.. is not working for my tastybuddies.

I’m sorry! I feel like a total traitor writing about bath water and cardboard in my reviews, but I have to say it is totally possible it tasted this way because my first cup of it was with microwaved water. The second cup was when I decided to write the review however, and it was with regular water.. so I don’t know.. but I’m sorry :(

This is the ONLY green tea in the world that I have been able to drink. I honestly can’t get enough of it

It still smells awesome. I haven’t tried any yet though.

So sad! I was looking forward to trying this…but thank goodness hadn’t purchased yet. Thanks for the warning, though I am sorry it didn’t work out for you. Boo. :(

Cinnamon taste is strong…but actually it’s one of my favourite! We can’t love all the same teas:)

Finishing my sample up of this, hooray. My notices page is not working and it is driving me crazy. I know I get mad at the red notification for friend activity on Yelp so not being able to get rid of it on here is bothering me way more than you really think it should. I don’t know why red dots with numbers in them bother me so much since it’s pretty typical on the internet but argh!

I don’t like this much at all. It just doesn’t taste like tea. It doesn’t even taste like a tisane. At least for a cider, it’s not powder? Bright side I guess.

Nice to try but meh.

Okay, now that I know this is primarily apples and stuff, with green tea as the third last ingredient, I know what to expect: a really tasty apple cider that’s not horrendously sweet. But it doesn’t taste of green tea, either. Provided you aren’t expecting anything remotely like green tea, this is a lovely hot apple cinnamon drink. And water temp — yeah. I treated this like a green tea and enjoyed the result more than what got made for me at a DavidsTea with too-hot water.

I was trying to find a tea this morning that would cure me of the spins, as a result of lastnight’s escapades. Don’t judge, I rarely drink and after all the fireman business I needed a night out, alas it did not work haha
I’m not sure who I got his one from but it was in a swap and on my shopping list.
it did smell a bit on the old side and unfortunately this came through a bit on the taste, but the apple comes out enough to mask it and be a good apple tea. I don’t really think I am getting any other flavours here. I thought it could use more cinnamon but then it would probably taste too much like Forever Nuts.
overall a good apple tea that is mice and light

i just like the name of this tea heh

This smells absolutely amazing on opening—rather like apple crumble; very intensely apple. I had high hopes for this tea, perhaps too high.

The tea itself is like a very light apple cider drink. I get light apple, and cinnamon, with a bit of almond in there as well. It isn’t as weak as some people had experienced, but not as intense as I was expecting. I probably should have used more—I only used 2 teaspoons for a 12 ounce mug.

Omg, my friend and I were so disapointed when our local DT was completely sold out of this during the winter season because we were dying to try this tea. Well I bought some online during the weekend and recieved it today and was so excited to taste it. Wow what a disapointment… It tasted more like a cinnamon bun instead of a carmel apple (BTW I totally HATE cinnamon buns). So I had such high hopes for this tea that I bought 100g… I dont know what to do with it. I am very sad now ): This tea just isnt for me. If you are they type that loves cinnamon buns and sweet sweet apples then this is the tea for you. I cant wait to bring this to the store and return it for a nice big tin of something else…(:

Mmmm, I love cinnamon buns! Sorry this tea was a disappointment for you.

I finished this one earlier this week. Time had definitely taken its effects on this one unfortunately but such is life. It was still good, but I’m not going to miss it. I think I’m more of a straight cinnamon-apple tea sort of a person and there many other things going on in this one.
Glad to have had it, not sorry to see it go.