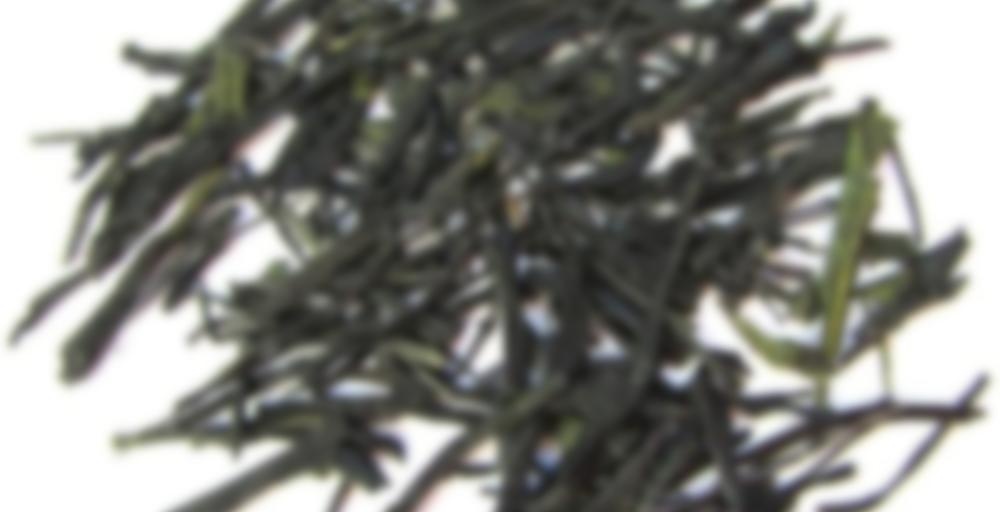 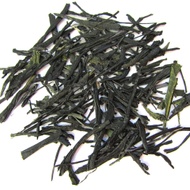 A completely unique sencha with a fruity taste which accompanies the usual grassy notes associated with sencha.

This sencha is produced from the cultivar ‘Sun Rouge’ released in 2009 after 9 years of research. The cultivar was produced by crossing v. sinensis with taliensis to produce a cultivar which grows purple tea leaves.

The tea is noted for turning bright pink when a drop of lemon is added to the brewed tea.

A few months ago, Cameron B mentioned loving some freeze dried miso soup so I ordered it for Youngest for Christmas. She loved it so much that I ordered some for myself! I had never had miso soup. I tried it and it was really good. My husband liked it, too, so I decided to try to make some homemade miso soup.

I made miso soup with zucchini, fresh chives from the garden, and wakame. I also made potstickers and a homemade yumyum sauce. Naturally I wanted a Japanese tea to complete the meal and this is probably the only one I have other than matcha.

The first time I made it we had it more or less gong fu style, resteeping and pouring into tiny cups. It looked almost gray/pink with purple at the edge of the cup until we added lemon juice which turned it really pink, but I preferred it plain.

This time I made it western style and poured two steeps together into a large tetsubin for serving. I think it had more purple/pink color this way, but probably just because we used larger Japanese cups that Superanna gave me. (The tea was also from her.) It was probably the depth of the tea that made it appear to have deeper color.

We both enjoyed it, and it was really great with the food. It is a rather mild Sencha so it can tend to disappear if sipped right after a strongly flavored bite. We made a third steep to drink after the meal and I think it looked even pinker. It was easy to drink and had very little drying effect, nicely hydrating.

Yum! Zucchini in miso soup sounds delicious. What type of miso was it? :O

MUSO Dark Aged Miso, full-bodied, naturally crafted with soy and rice. And the back says Maruya Hatcho Miso and says it is aged in wooden barrels. But I know little about miso so I am just typing what is on the package.

When I had breast cancer, I was told to avoid soy products as much as possible since it is in EVERYTHING now, including gelato, but miso and real aged soy sauce were fine.

ashmanra I’m allergic to soy so I can’t eat any of it in anything, but my understanding is that non-GMO soy is okay. The trick is finding it!
My late wife had celiac. When she was in Italy, she threw caution to the winds and ate pasta and bread in moderation with no ill effects. Her PCP told her that she might have fared well because (once again) she ate non-GMO wheat flour products. Of course, when she returned to the states and thought she was ‘cured, of celiac’ she quickly and painfully discovered that she wasn’t.

I’ve definitely bought some not so good miso soup mixes from the store before. I still need to get some of the one’s Cameron Recommended to try.

White Antlers: How I wish we had better choices with our foods! The milk in Ireland was heavenly, and every place that had cows’ milk had goat milk, too. You can’t find it where I live except for really expensive condensed type.

Lexie: you may already know, but the one Cameron recommended was Amano Foods variety pack. The eggplant one is superb.

I agree, the eggplant one!!! (drools)

Miso is the one migraine trigger of mine (it’s the fermentation of the soy in things like miso/soy sauce) that I will cheat on. I just can’t give it up!

Mastress Alita: I bought another miso paste first and can’t use it because it has MSG. Naturally occurring MSG doesn’t get us, but added MSG makes me drunk and triggered a migraine for my husband. We had been to a local Asian buffet restaurant many times with no ill effects, but one day we went for lunch and I stumbled in the house, giggled for a minute, and then told the kids mom was gonna take a nap and crashed on the sofa. By that night, Ashman had a migraine, I can only guess they had started using MSG.

Since I was a teen and had my first Chinese food, MSG makes me giggle and then crash. I didn’t know why it happened until I told the owner of the restaurant and he said it was the MSG and told the staff not to add it to my food anymore. It never happened there again.

MSG is one of my migraine triggers, and ya, I usually don’t have issues with naturally-occuring glutamates. But soy that has gone through fermentation (like it has in miso and soy sauce products) can also get to me. It’s some chemical (which I forget the name of now) that is released during the fermentation process. I try to limit my miso soup intake at restaurants to a very small cup.