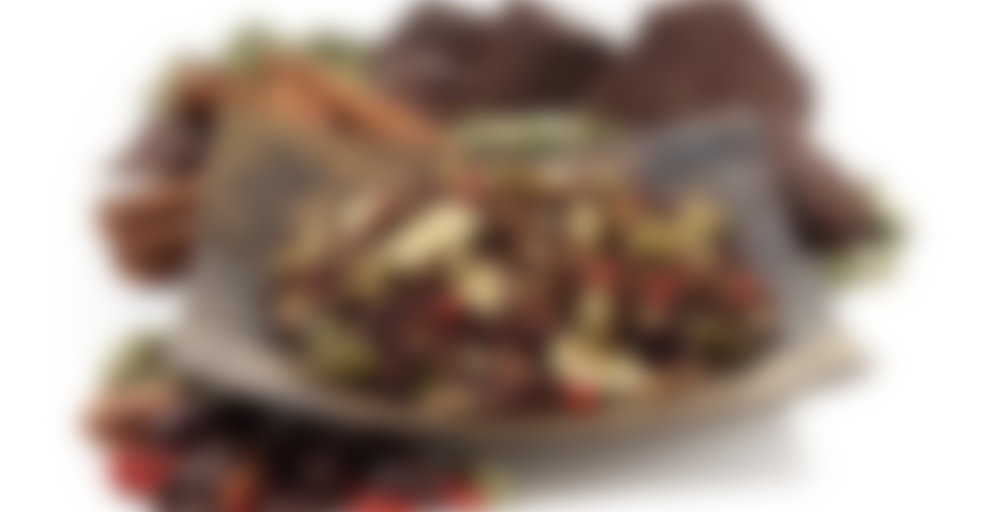 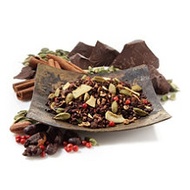 Smooth & sweet cocoa with a lingering spice note of ginger and clove .

ChOTE (Chai of the evening……)

I decided to use this as a chai spice mix again, but this time with an unloved rooibos blend in my cupboard. I used 3 actual tsp of Zocolatte Spice and 2 actual tsp of Bourbon Street Vanilla Rooibos from EnglishTeaStore.com. I used my usual chai method, and this is good. It is vanilla, mocha-ey, and cocoa-ey, as well as spicy and a little peppery. Really good….even better than with black tea added as far as I am concerned. This totally works. My current rooibos chai (from Upton) is just a little heavy on the anise for my taste to be drinking on a regular basis.

Rating as a chai spice as used above….at least an 88.

It’s good that you are finding a way to use it. :)

Great idea! I got this tea and tried it on it’s own and wasn’t a fan, I’ll have to follow your lead :)

I am very disappointed. Very. I believed this to be the reincarnation of a Specialteas tea that I thought had disappeared forever. I was wrong. Teavana took the idea of this lost tea and made it something bad…then gave it a silly name. How could you do this to me, Teavana? I feel so betrayed.

The basic ingredients are the same as Specialteas’ Spicy Chocolate, but the proportions are way off. Waaaay off! And even before I compared the ingredients of the two teas, I can see where Teavana went wrong. too much chicory root and not enough cinnamon. I am unreasonably upset. Probably because I had such high hopes. Sigh. My cup smells like medicinal tea. That aside, it is lightly chocolatey and a bit spicy, but mostly, it’s chicory. I think I’ll prepare the tea differently next time and see if it’s better. I used the chai stovetop method this time, which worked on Spicy Chocolate, but not this.

Unfortunately, I bought two pounds of this at 75% off, thinking I had struck gold. Sooo, in light of my stellar reviews, anyone want to swap?

Edit: a lot of sugar and a splash of almond milk makes this palatable. I guess I can drink this…

I wonder how it would be with a little bit of Harney’s Herbal Hot Cinnamon added? I know you were not wanting rooibos at the time, but it really just adds cinnamon….

Might be good! I’ve never had Herbal Hot Cinnamon, though it has been on my shopping list since forever.

I did not like this one either but if you add black tea it is better.

Thanks for the tip, Amy! One of the main reasons I loved Spicy Chocolate was because there was no actual tea in it to muddle up the spices, but this particular tea might benefit from some tea since it doesn’t have much spice flavor to start with anyway.

If I don’t like a tea as is, sometimes I muck about with certain steepings. You could always add some cinnamon one way or another, and pick out a bit of chickory to see if that will temper it down a bit. I admit, that’s a lot of work, but you do have two pounds of it! : )

The one new tea none of us in the store like and the one sale tea I did not recommend to anyone. Chicory is definitely overpowering. Sorry you wound up with so much of it. I can’t imagine it not being discontinued, hopefully before the new fall launch.

Thanks for the sympathy, Autumn. Thankfully, the husband likes it so I’ll feed it to him. :)

Did you ever get to have White Chocolate Moon from Specialteas?

muppetlove sent me some of this! Thanks a bunch!

This smells like a cross-between or combo of coffee, tea, carob, spice, cream – of sorts.

The liquor has various colors and textures that make-up for a murky medium brown with orange-ish hue.

It tastes like I am sucking on a dull coffee bean. There is a hint of spice but it’s not overly intense. There isn’t much of a chocolate taste, really, but the end-sip is sort of sweet and a tad creamy so maybe that is where the ‘chocolate’ notes come in.

This one is alright…not overly memorable but it was drinkable-enough.

VERY glad I got to try it tho! Thanks again!

I was wondering how good this herbal was. Now I know not to try it…

It’s really best when it’s mixed with another tea.. a black tea for me! :D

I made this last night for our little 2 cup pot of evening tea. There was just two perfect teaspoons left, and my memory of Teavana herbals told me you need extra leaf BUT I went ahead and made it anyway. Sadly it was weak even though I tried brewing it longer than usual to compensate. Not much chocolate or spice. Ah, I knew I should have put a spoon of my own rooibos chai in! I’m kicking myself.

I believe this is the first Teavana tea I’ve consumed; I got it in a trade with DaisyChubb rather than buying it myself. Let’s just say that I have strong moral objection to the company’s business practices so I’ve decided not to give them any of my money – not that I don’t appreciate the tea, Daisy. ;)

This is an interesting mix – chai spices without the ‘chai’ and mixed with chocolate basically, though it smells totally awesome. The result is a little bit light for my tastes, though I could see this going well with a sweet dessert or something similar. I was expecting it to have a stronger chocolate flavour than it actually did, there are some mild bitter cocoa hints but the flavours seem to mostly be from the spices. I swear I’m tasting chicory root in there as well, though it doesn’t seem to be listed with the other ingredients. Hmm.

Chicory is definitely there. I don’t why it’s not listed unless they recently changed the formula but my packages definitely say chicory on them. I’d say to try a stronger brew for more flavor but then I feel the chicory takes over. I guess you could dilute ie with milk of that happens. :)

Jillian, this is weird – I have the same issue. I brewed it up a few weeks ago and noticed the chicory taste (which I do not care for either). It wasn’t listed on the ingredients for mine either! I’ve been trying to think of what to do with it now. Mulch? Compost?

I agree with Amy oh. I use mine as chai spices with black tea, or even with a rooibos.

@Amy Oh & SimplyJenW: I’ve got enough left for one more cup so I might try adding some black tea like you suggested – though that sort of defeats the purpose of a caffeine-free chai.

Rooibos works, too. I like vanilla rooibos with it.

To be honest Jill, I won’t be spending my money there again and I agree, their business practice makes me sick D:

Thanks for trying though :D

Zocolatte Spice? I think I love you! At least, while I have the four ounces of you that I have. Chocolately, spicy delicious. I like you better than the Azteca Fire that I tried. As Amy oh said in her tasting review, I bet you taste amazing with black tea. Maybe I’ll try that next time.

I prepared a giant travel mug of this to take with me while I took the dog to the emergency vet, and promptly forgot it. It was still warm when I got home; warm and delicious. The chocolate and ginger were the most prominent flavor notes I could detect, though since this is a backlog, I’ll need to have more to make sure. I remember liking it though. It hit the spot after my vet visit.

hope the doggy is alright!

Is your doggy ok? I hope all went well!

I made the mistake of reading the reviews before trying this tea, so I was set not to like it. Turns out, though, that this is a decent herbal. The chocolate adds plenty of sweetness, and the spice is there, but it is also fairly mellow. This seems like a great tea for those late nights when I want some chai but I also want to sleep at some point. That being said, I think this would be awesome added to a mid-grade Assam. Seriously yummy.

I should definitely add some of this to some Assam. I knew there was a certain black tea that would be perfect with this one. Nice idea!

If you try it let me know what you think. It seems like it would be a nice chocolate chai.

I did try this a couple days ago. Mixed with assam, it is perfect. It gives it a fuller flavor that is missing when it is just the zocolatte blend.

Hi, this will (hopefully) be one of my last Teavana adventures for a while…

I tried this blend this afternoon at work. My immediate thoughts were: this isn’t bad, it actually tastes like Spicy chocolate as promised. But… it really needed SOMETHING.

So, on my way home I had a semi- intelligent thought. What if I added some black decaf tea to this? I stopped off and got some Decaffeinated Evening Tea from Ahmad Tea. When I mix the two together, I get a wonderful dessert tea.

So apparently I realize now that the secret to making Teavana tea great is by adding actual tea to it???

I actually loved this when SpecialTeas sold it as “Spicy Chocolate.” I especially loved that it didn’t have tea in it at all. Then again, I’m not usually a fan of black tea.

I’d rather just skip the middle man and go straight to hot chocolate. ;-)

haha. I’m just reading this now, but this was actually the tea that gave me the idea to combine teas! It definitely helped that I added it to a black tea!

I dunno why this tea is rated so mediocre-y, it’s one of my favorite decaf blends. I mean, it’s full of coconut, cardamom, pink peppercorns and cacao nibs or something! It’s kind of an ugly, murky color, but it has such a wonderful scent, like mexican hot chocolate or cake. Tasty on its own, delicious with milk and sugar.

Not bad, not bad at all to me. This tea would be great to cook with, like a marinade for steak or chicken. Hmm….

Hmm… Never thought to apply this tea to a savory dish but good thinking!