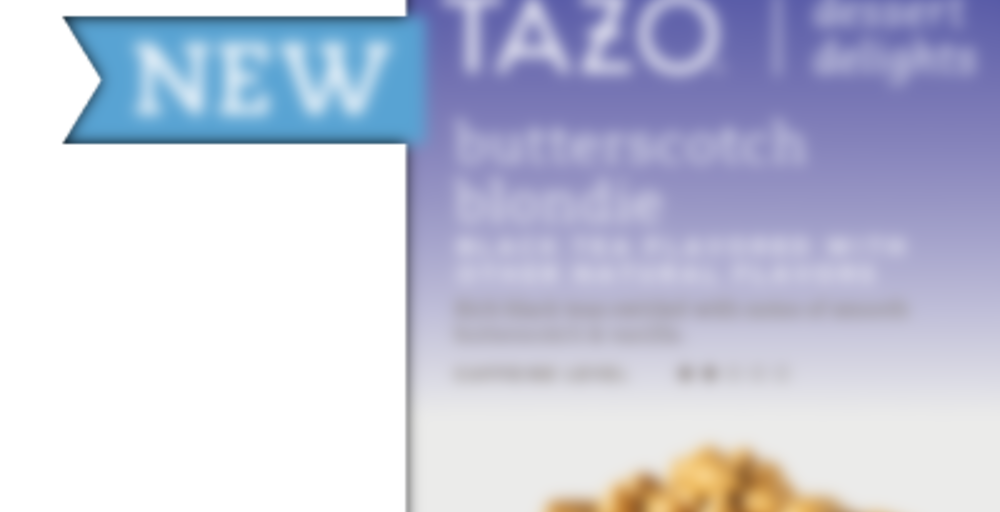 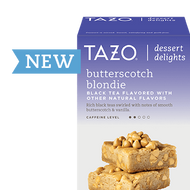 Steeping Instructions: Bring fresh, filtered water to a boil (212°F ). Pour water over the filterbag in your cup (8 fl oz). Sit tight until steeping is done (5 min). Delicious tea is on the way.

I kind of had a feeling I wasn’t going to like this one as soon as I opened the tea bag. WAYYYY too sweet for my tastes, plus I’ve never been a fan of butterscotch or blondies in general. But, guess you can’t knock it ’till you try it.

It does taste better than it smells, in my opinion (insofar as the taste isn’t quite as pungently sweet as the smell). All the same, I really don’t care for the taste either. Again, I’m really not big on overly sweet things, particularly when it comes to beverages, so my review is entirely biased.

This reminds me very much of Bigelow’s Salted Caramel black tea. Both have a black tea base with chicory root while Salted Caramel has rose hips and Butterscotch Blondie has cocoa peel, licorice root, cinnamon, and cardamom.

This has a very full flavor. I can taste the sweetness from the licorice root, but it really works here. I’m not sure what cocoa peel is exactly, maybe shells, but I don’t taste any sort of cocoa flavor. Neither do I taste any of the spices. It’s a rich caramel cup, and I can see the similarity to a blondie with its sugary caramelly bite, but I don’t taste the butterscotch.

Thanks again for the swap, AJRimmer!  This was intriguing despite being from Tazo… but it’s less disappointing than I expected it would be.  I’ve never had what you might call a butterscotch blondie but this is certainly a sweet tea and tastes something like butterscotch or brown sugar with a different layer of flavor from the seemingly misplaced chicory root.  Why might that be in a dessert?  The other flavors fit though.  It’s sweet, it’s black tea.  The second steep was weaker in the tea itself but still some sweetness.   I also drank some of derk’s What-Cha Four Seasons oolong but I have no idea what is going on with me and oolongs lately… they just taste like OOLONG to me and I’m tasting no specifics… so I don’t want to write a note for that one yet…
Steep #1  // 1 teabag for full mug // 18 minutes after boiling  // 2 minute steep
Steep #2  // 4 minutes after boiling //  3 minute steep

I like chicory fine but also felt it came across a bit too strong/out of place in this particular blend. I still keep my cupboards stocked with Tazo’s Glazed Lemon Loaf.

Well, hello there! Good to see you back. I think I may have a bag or two of this left, probably the same vintage…maybe I’d better trot it out soon.

Steep a cup during Stay at Home

Yesterday I was trying to sip down one of the coconut Earl Greys I had in my collection that I had grabbed looking for a “dup” for my beloved “Foggy Coconut” by 52Teas, since I can’t just reorder that whenever I need a restock. My Hawaiian Earl Grey from Tealyra had already gone the way of bad coconut, and then I discovered that my Earl Grey Bella Luna from Adagio had also gone bad. I had a harder time telling with that one because the bergamot was so strong in it, but it had a sour note that kept making me suspicious, so I carefully pulled several slivers out, ate them separately, and… yup. As soon as I realized I removed my review yesterday and trashed the bag. I would never judge a tea based on a soured ingredient. And then I hastily made a cup of this to take to work at the last second after dumping the other cup.

I remember I bought this because my local grocery had it and Roswell liked it so much; they’ve stopped carrying it since and now they only carry Lemon Loaf (and I’m okay with that, since Lemon Loaf is my favorite, I’m sure it was selling way more than the others and they made a decision based on shelf space). This certainly isn’t a bad black tea, it just doesn’t taste particularly strong in butterscotch notes to me; I get a bit of a vanilla note, and a hint of caramel, but it doesn’t read as butterscotch per say, and I think that’s because the strongest flavor is a warm, roasty chicory, with a touch of a cinnamon undertone; it’s pleasant, but rounds it out in a way that doesn’t exactly make me think of a Blondie dessert in any sort of way. So it’s a pleasant bagged black tea, and I like the flavor I’m getting from it, I just don’t particularly think it is emulating what is listed on the box, at least not to my palate.

I only have a few teabags left and am going to finish this one off soon, and admit I’m going to miss this one. I don’t have many bagged black teas I can just pick up at the store that I really enjoy, at least not as much as this one.

Lemon loaf is by far my favorite of their trio of dessert flavors as well!

I liked the Lemon Loaf as well, though admittedly this was my favourite. The vanilla one was just fowl though!

I never even bothered to buy the Vanilla Macaroon during the time my grocery had it because I never saw a single person who liked it, hahaha. I could never justify getting a full box just to satisfy my curiosity of how bad it was!

Oh dear. I had better check all my coconut teas!

I didn’t love this one the first time I tried it, but this time I find it much more pleasant. The main flavors are a light butterscotch and some sweetness. It’s a bit weak compared to what I expected, but I find it pleasant. Out of the Tazo dessert flavors, I definitely prefer the lemon flavor, and the other two I find decent, but I wouldn’t seek them out again.

Crazy morning today! I’m working from home and fielding a bunch of different cross department type things, but also it’s officially a week from when the podcast I’ve been working on for the last few months officially launches!!

I’m drinking mostly bagged teas this morning – in part because of the September Sipdown prompt but also because they’re fast and easy in a very chaotic morning of managing all these different things! Plus, this is honestly the best butterscotch flavour that I’ve ever had in any tea and while I’m sometimes annoyed that this delicious flavour is on a bagged tea instead of something loose leaf, today I’m very appreciative of having such a delicious bagged option!

Love the concept of your podcast, Ros! Looking forward to tuning in. :)

YUM. perfect for the morning with milk and sugar. I dont taste much butterscotch but more of a cinnamon roll flavor.

I’ve been trying to brew this tea — every time I get it, I give it to my sister (who likes spicy dessert teas way more than I do). ….Finally opened a box before I had the chance to be nice. I like this tea. It’s good. I don’t have problems with it. I just had a cup today at work without milk and it’s good either way. One thing I like: it’s not sweetened in any way, but the flavors are strong enough that sweetness isn’t needed.

I always try to keep a few boxes of bagged tea on hand for situations where brewing loose leaf tea isn’t practical and Tazo is one of the better brands I’ve found at my local grocery store. This particular blend smells AMAZING…just like I’m baking some kind of yummy butterscotch dessert! The flavor doesn’t live up to the aroma, but it does have a nice hint of sweetness as long as it isn’t overbrewed. That’s easy to do though, so I try to stick to shorter steep times and slightly cooler water when brewing this one.

A little milk improves this one, too.

I’ll have to try that!