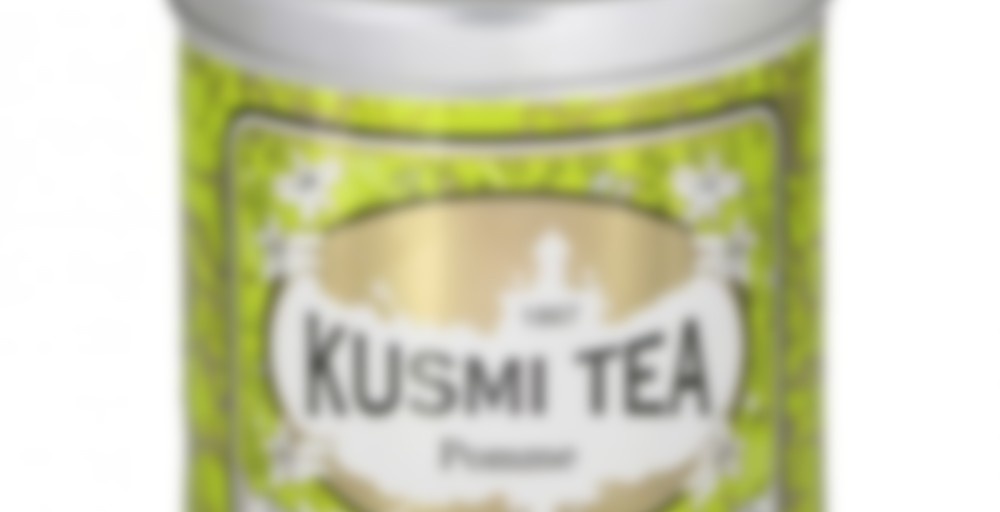 This black China tea will please thanks to its original fruity flavour. Very appreciated in Japan.

This tea has been keeping me company for a few days now…YUM! See previous notes…also backlogging…

So I accidentally went into this shop today where they have all this here Kusmi. It was actually buy myself a different sort of treat entirely (chocolate covered almonds om nom nom) but this was in the same section of the shop, so I thought I should at least have a glance, you know? Just in case anything had changed. nod nod

Long story short, I allowed myself to be inspired. Which is strange really, because I’ve not had very consistent luck with apple-flavoured things. I’ve had things which were quite nice. Yoghurt for example is very nice with apple. As are pancakes. Jelly beans with apple not so much. Too synthetic tasting. Various tisanes with apple bits in, absolutely horrid.

I don’t know what I was thinking when I bought this. O.o

At first when I opened the tin a very apple-y aroma came at me. Then when I smelled the leaves a bit more closely, it had that apple in it still, but also, mysteriously, something almost sort of spicy. I’m afraid my immediate thought was paprika…

Obviously this doesn’t have any spices in it, but it is pretty odd. It’s the same thing after steeping, only the apple aroma is smoother and more pronounced. That funny spicy note was still there though. I had to go into the kitchen and smell an apple in order to figure out what to do with that note.

Did you know that apples smell slightly spicy when you pay attention? I didn’t know that!

Just saying something is ‘apple flavoured’ is really a bit of a problem though. There are so many different sorts of apples, and apples are one of the fruits with enormous taste variation between sorts. I tend to like Pink Lady best, and was once recommended Fuji based on that preference. I did not like Fuji at all. So in moments of Most Glorious OCD, I’m sitting here kind of wanting to know what sort of apple it’s supposedly flavoured with.

Anyway, nitpicking aside, it’s time to have a look at the flavour of this, and that’s where that spicy note comes in again.

I was really surprised by the flavour of this at first sip. The very first note, right up front and stomping onto the tongue with boots on, is something that most of all tastes dusty. The sort of dusty flavour that I get from jasmine scented teas or in some cases heavy bergamot.

What the blinking heck???

This is not something I associate with apples at all. It’s not something I associate with generic Chinese black (base tea) either. I did not oversteep, I did not use more leaf than normal, I used the recommended steeping temperature (85°C-90°C, which is what I use for ALL flavoured black). Nothing but black tea and apple flavouring is listed as ingredients. So where that is coming from I can’t for the life of me figure out. (It’s not impossible that it’s contamination from the pot, but it seems rather too much for that)

Thankfully, as it cools a bit to a more drinking friendly temperature, this off-putting phenomenon goes away. Now the apple flavour, which was only present in the background before, is coming out in spades. Spades, I tell you! Spades! Diamonds, hearts and clubs as well. The whole deck, in fact, has gone all apple-y. I’m not accustomed to this strong flavouring in a Kusmi tea. They, in my experience, tend to be a lot more subtle, but this one is certainly an exception.

And yeah, it’s still one of those spicy apple sorts. The reason I didn’t like Fuji, as I mentioned earlier, was because I thought it had a sort of bitter note to it. I wonder if this is actually the same sort of thing as was causing that initial unpleasantness for me earlier. This is just not flavoured after my particular preference in apple.

It’s really surprisingly good now that it’s more apple, less dust, even if it’s not my ideal place in the apple spectrum. I find that spicy note somewhat distracting, but I can deal with it, I think. This is probably not one I’ll buy again when it’s gone, but it’s good enough that I might decide to try other apple flavoured teas should I come across them. I definitely don’t think that these leaves are going to linger on the shelf for years untouched. They will be used.

I can’t say that I’ve ever given apple that much consideration. I have a box of an apple tisane bagged tea that was a gift — I might have to dust it off and give it a second chance and really ponder the appleness. :)

tear open the bag, sprinkle onto apples and make a pie from them :)

Have you tried Gala or Honeycrisp apples for eating out of hand? Honeycrisp might only be available in the US, though.

Gala apples are my favorites! I’ve never had an apple tisane or tea that really tasted like an apple.

Rabs, I haven’t really either other than finding my favourite sort. And then I would have to fall hard for a sort that is not grown in Denmark but imported from Brazil and therefore twice as expensive. But it’s so nommy! It’s the perfect apple. Just the right amount of tart.

Ashmanra, I’ve seen Gala around here, but I haven’t seen Honeycrisp, so you’re probably right. I’ll give Gala a go.

Tamm, neither have I, really. They were mostly like hot apple juice to me, only far more sour. I like apple juice, but I rather prefer it cold! :)

Amen to that! Except as soon as I hear hot+apple it is equal to wanting some kind of wassil and I’ve just not always had luck with chai apples because it just comes off way too spicy instead of apply.

I adore Pink Lady apples. Mmm. Piñata is probably my favorite but Pink Lady is a very close number two. Not sure if I’d want them as a tea though….

I think this is just some sort of generic apple, though.

I haven’t heard of Pinata, although I did spend rather a lot of time on a website about apple cultivars this morning, trying to identify the one we had in the garden when I was little. That was awesome, but unfortunately it seems to be mostly a garden variety and not a shop variety. If I could get that one again, that would probably be my favourite, but I had no luck with the identification.

I did however learn that Cripps Pink = Pink Lady, and that when they are sold as Cripps Pink instead, it’s because they weren’t quite good enough to get the PL trademark. I didn’t know that! I thought it was just two very similar apple sorts.

So my latest Kusmi order showed up today. So far, this is my new favorite brand of daily drinkable tea. I like that they don’t try to turn the tea into candy. I have always liked the idea of Apple tea, but it’s one of those things, I keep searching for one that lives up to my idealization of an actual apple flavor. Not Jolly rancher apple candy. Not air freshener. So, this is why I decided to go ahead and trust Kusmi with the dreaded Apple quest. The last apple tea I ordered (whittard) got tossed out. Pieces of apple bits for my eye to see did not trick my tastebuds.

This is Kusmi, and they do their flavor with subtlety. I love that about them. So. Today’s order of 3 more tins, and after aquiring enough Kusmi tins to supply a small restaurant… I now own Apple as well. It is the first one I brew today. And I am pleased. This is tea first, with apple second, and it isn’t sour, it doesn’t hit you over the head. It doesn’t contain little bits of apple. It has more of the flavor of biting into an apple. I get that certain quality in the apple peel… I am looking for the word… the mustiness ? that a fruit skin naturally has. It looks like I have found an apple I can drink. I will use this tin up!

So the score for Kusmi is 7 winners out of the 8 I’ve bought so far, but there’s two more in this shipment to try. I have more confidence with every tin I open, that Kusmi won’t let me down.

If you also have kusmi’s caramel, try a half and half mix of apple and caramel. I thought that was awesome.

oooh, great idea! I will definitly try that :)

tried that, yup, is good!

:) There’s something waiting at the post office for me to pick up, by the way. I believe it might be the bourbon vanilla.

A really nice apple flavor to this tea. I like that I can taste the apple here. With some apple teas, the flavor gets a little lost, that doesn’t happen here. The black tea is a strong tea but not overly aggressive. A nice “freshly baked” tone to the tea, with notes of cocoa and a hint of smokiness that is more apparent to me as the tea cools than when it is piping hot.

I liked the true-to-the-fruit taste of this apple tea. A really good one … then again, I’m seldom disappointed by the Kusmi teas that I’ve had the good fortune to try.