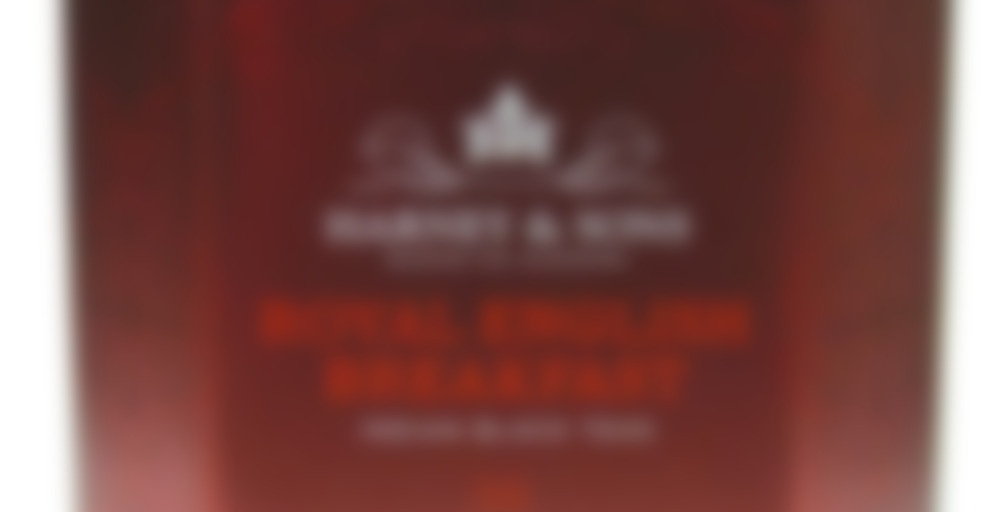 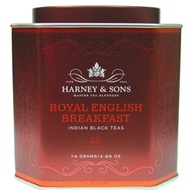 A stout combination of Indian black teas makes a smooth, full-bodied brew. Royal English Breakfast is delicious when complimented with milk and sugar.

In a way, this is the tea that started it all. Years ago I ran into a friend at Barnes and Noble and she was buying Hot Cinnamon Spice tea. She told me it was her guilty pleasure. Months later, I remembered it and bought her some for Christmas, but since I had a “Buy Two Get One Free” coupon I picked up this blend for myself.

My youngest daughter loved it, and we began to explore lots of the Harney and Sons offerings. I think I still have more of their teas than any others on shelf. But I have purchased so many teas and quite a few that just turned out not to “float my boat” that now I am swamped with tea that needs to be drunk before it gets too old. This is not the original tin, but one my daughter cajoled me into buying because she missed it, but then she started drinking their vanilla teas and Lapsang for a while and neglected this one.

I asked her to go ahead and finish it as there are only five sachets left, so she made some today. I really MUST clear away some tins as i have five “tea spots” in the house and there is just too much!

It looks like I will be repurchasing this one, as she just came to my room and told me that she thought it was one of the best teas she has ever tried, and she cant imagine why she hasnt been drinking it all the time, LOL! I shared the cup with her and it really was a nice blend, although she always puts loads of sugar and milk in her tea and that part was a bit much for me!

My “tea that started it all” was Harney’s Tower of London :)

Barnes and Noble doesn’t carry that one, but when I heard about it I wanted to try it so badly! Harney and Sons was sold out! But hubby tracked it down at some little tea shop online and bought it for me as an anniversary surprise. I used to keep both loose and sachets on hand, but I have finished my most recent tin of sachets that my daughter bought at the Tower itself and I am at less than half of my one pound bag. It is great cold steeped.

This sounds delicious, and it’s gone right on my to-try list. I’m going to run myself into the ground with shipping charges from the US to Canada, but when I read reviews like this one, it all feels worth it.

I did a little sleuthing and I am pretty sure this is the very same tea as their Big Red Sun! I am very happy because now I can have it loose leaf! :)

Harney and Sons has a lot of good stuff!

That’s awesome how this is kind of like your gateway tea.

I was wondering which one started it all! :-)
I love the Tower of London blend too! So nice of your husband to surprise you for your anniversary and your daughter to bring a tin from the real Tower.

I love stories like this. Five “tea spots” in the house does sound like a lot! I have about three spots myself and already feel overwhelmed by tea. It’s amazing how quickly it accumulates.

This is another of my tagalong purchases, and I decided to try it out because I have one of those rotten headaches which caffeine and a few moments with my eyes closed seem to help. Nice to pop a sachet in a cup when not feeling at my best.

Stout and delicious! I am surprised how smooth it is for being so robust. I am getting that unsweetened chocolate flavor which I absolutely love. It tastes nothing like coffee, but definitely shares its heft. I do think this would be fantastic first thing in the morning, and with food. I also think this will resteep well – and am going to try that out in a few minutes.

I can also feel my headache easing.

This is the tea my youngest got hooked on when we first started drinking “better” teas. I try to keep a tin on hand because she occasionally asks for it still, although right now she is on a Lapsang kick!

ashmanra – I think your youngest and I have similar tastes – she’s the Harney Vanilla Black lover too, right? I think Lapsangs might come to me in a year or so — still at “slightly smoky” :) but they are my husband’s favorite! P.S. I think Vanilla black is slightly smoky due to that tarry vanilla bean flavor it has.

gmathis – after I read my note post tea and post headache I fixed several grammatical mistakes in my tasting notes- he hee! I needed a stout royal kick too!

I’m turning into a lazy writer … I have good-natured and patient copy editors who sweetly and quietly unravel my grammatical knots :)

Full disclosure, I’m not normally one for Breakfast teas.

BY THE BEARD OF ZEUS! THIS IS STRONG!
Wow, wow, wow, wow! SO strong. Smooth. and STRONG. Is this Assam? Seems like it might be Assam… DAMN IT’S STRONG. People really steep this for 5 minutes?

Edit: This review is the result of 7 different cups of black tea on an empty stomach. I’m going to leave it as is to warn about the dangers of writing reviews while highly caffeinated. Oh, the shame.

Stay in school, don’t do drugs, moderation in all things – even tea.

This was one I almost picked up on the most recent tea spree. I decided I had enough “breakfast blends”. I put myself on that particular shop’s list for when they get another shipment of Birthday tea in; now I think I’ll go ahead & grab this when they call me that Birthday is in.

Let me know how you find the Birthday tea ClassieLassie. Harney NZ will be importing it soon and I’ve been eying it curiously.

I got this tea as a gift. Being away from my normal tea accoutrements this bag tea had to do. Nice malty breakfast tea. Lower grade Assam in a fancy silk bag that does the trick but not to exciting if your used to loose leaf. Nice tea.

Know what you mean but if I had a choice of bagged teas, I’d be pleased to be offered this one over most others. I love black tea!

I love black tea as well. Being an organic dairy farmer I love a tea that stands up to a dose of rich milk. Though I do drink neat tea often, however breakfast tea to me says, ‘milk please!’

Absolutely! No fake milk or 2% for me either! (My daughter doesn’t have cows but has 4 goats, 25 laying hens, 2 ducks, 2 Turkey’s that we’ll eat for Thanksgiving). With 8 children, you need to use the land and make cheese, bake bread and grow fruit and vegetables.

The other tasting notes for this tea are confusing to a beginner (me)….some said it was Assam, some Ceylon….but I was getting something stronger from this tea….so I went to Harney & Sons website and this is what they said about this particular tea:

“The mellow dark honey flavors of the Kenilworth (Sri Lanka) and complemented by the citrus and spice of the Kenyan Milima. They work perfectly with milk and sugar.”

Well kiss a fat frog on the butt, they are right! I love African black tea, so it all makes sense now. And this is a smooooooth tea. Royal English Breakfast isn’t just a “slab” of taste….there is some “space” in the taste that makes it more refined somehow. There’s a teensy touch of citrus that is just barely noticeable, even through the honey and milk that I use in all my tea. Don’t get me wrong, this is nowhere near a pinky in the air cup of tea. This is a bright alternative when an English Breakfast tea drinker wants something just a bit different. No teacup. Get a mug. :)

Hold on to your socks, this tea is strong! This blend requires 5 minutes of steep time according to the tin, but next time i’ll try 3 minutes. As with other English Breakfast teas, the milk and sugar compliments this tea very well. This would be great as a coffee substitute for most people :)

Boiling 5 min, 0 sec
Yours I Like This
0 likes
2 comments
Edit

Yah, go for 3 minutes, and vary the amount of tea depending on the strength you want. Try for 2 steeps.

Just a nice strong English breakfast tea to drink with breakfast. Not noteworthy or extraordinary, just satisfying and hearty. Like a good warm wool scarf.

It’s a gorgeous Sunday morning on Memorial Day Weekend, which makes me think I should be whipping up some gorgeous breakfast and making some painstaking tea with the gaiwan. Alas, I am impatient this morning and vied for the sachets. And for crying out loud, I’m eating Town House crackers with Nutella. The same thing I had as a late-night snack last night. No worries.

This is actually not the first cup I’ve had; I’ve just been too lazy/tea-funked to log the previous entries. I actually really like this one. It’s… it’s how an English breakfast tea should taste. It’s just brisk enough, with a little bit of that subtly sweet edge. Nothing crazy, nothing extraordinary, just a good old fashioned English breakfast.

This reminds me I need to get more sachet teas from H & S. I keep forgetting that I leave loose-leaf Paris at work and I love that stuff and want it in sachet form for work. Same with Tower of London, Valentine’s Day, and… maybe some others?

My favorite Nutella canvas is the shimmering surface of a silver spoon. lol

Hahahaha I too am guilty of eating just spoonfuls of Nutella. I agree that the toasted english muffin as a vehicle for nutella is also excellent. It’s really good as part of a nutella banana sandwich too :-)

Truly Nutella is a many-splendored thing.

I think I brewed this too long. Previously it’s been better so I’m rating it as what I would normally say.

Great on mornings when I barely have one eye open, great flavor.