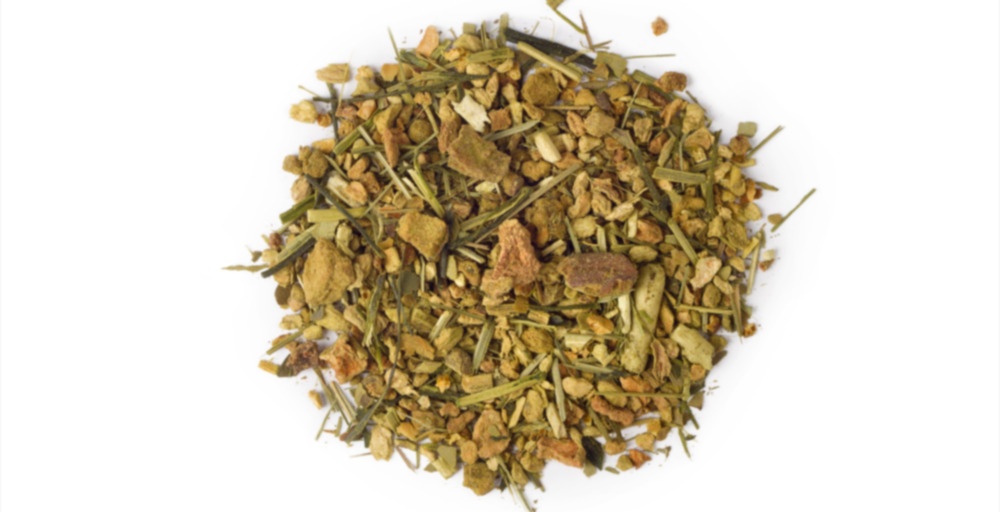 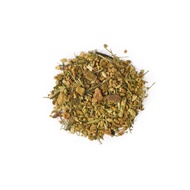 with 42 Ratings Rate this tea Rate This Tea

Lately, everyone seems to be buzzing about this tea. But who can blame them? With so many super-energizing ingredients, it’ll probably get you buzzing, too. It’s got the stimulating kick of guarana, matcha and yerba mate, plus a hint of white ginseng – Chinese medicine’s key to vital energy. Add super-healthy green tea, zesty citrus and a spicy hint of ginger, and you’ve got an energizing blend you can feel great about drinking.

The Tea and Jazz House 85

There were two lonely little sachets of this in the box, and I like mate and ginger so I figured I would give it a try!

I quite like it, actually. The ginger is definitely the strongest ingredient, but it doesn’t burn my throat or anything extreme. Then I taste a gentle lemon note and the earthiness from the mate and/or guarana. I would guess there was turmeric here as well, which there doesn’t appear to be. I don’t really get matcha, though I didn’t see evidence of that when it was steeping either, and thankfully I don’t taste much licorice root. Ginseng… maybe a hint?

Anyway, I found it rather pleasant, and am surprised by how extreme a reaction some other steepers had ha ha. Maybe these sachets were older and had calmed down a bit! I would consider having some of this on hand, especially for sore throats, upset stomachs, or sickness in general. But it seems DT doesn’t offer this tea anymore anyway.

Well… this is pretty much a big cup of nope for me. Herbally ingredients with a side of licorice? Not my thing. I have a handful of teabags of this, sent as free samples with orders, that I really need to just get rid of.

Nopity, nope. Its mate and me and mate just aren’t friends. I knew this going in so I am not really sure why I kept this sample.

This tasted like something I’d want to drink when I’m sick…a bit of citrus, lots of spicy ginger, and a lingering aftertaste of licorice root. I think it would be soothing to a sore throat the flavor would be strong enough to cut through congestion. But since I’m thankfully NOT sick right now, I found the ginger and licorice to be a bit overwhelming and more like taking medicine than enjoying a nice cup of tea.

A sample from VariaTEA!

This tea really reminds me of New Moon’s Immune Defence or Surgical Recovery (without the enjoyable clove) where the ginger kind of outweighs everything else, but is at least mellowed out by the other ingredients. I was excited to try a yerba mate because I don’t think I ever have, but alas, I can’t pick it out of all the other ingredients here.

It’s a tasty ginger tea and I appreciate the chance to have tried it out!

I got this as a sample in my most recent order, and I really dislike it. I want to preface this by saying that I love sweet, dessert, and warming masala chai tea blends. I also enjoy bold flavours; however, this tea tasted strange and almost medicinal? It also had an unpleasant aroma. I do not see myself purchasing this again.

However, for me, although tea has health benefits, I mostly see it as a form of self-care. I love the process of making and smelling tea. And this tea was just not it for me.

I found the ginger kind of overpowered everything else. 3/5

I had a feeling I wouldn’t be too big of a fan of this tea because of the ginger. However, it was better than I thought it would be. The apple gave it a bit of a fruitiness and the ginger gave a kick of heat. I got it in one of Davids packages… I believe the energizing teas kit… I don’t think I’d buy it again. But it was at least worth a try… a nice afternoon pick me up.

I have to say my first time trying this tea, I was not the biggest fan of it. Maybe it was just cause I was too busy to enjoy it it or it was not what I was expecting from the smell of the tea leaves.

I can taste the ginger but also something else that doesn’t agree with me and leaves a bad taste in my mouth. I am not a fan of this one.

Possibly the licorice root in the blend?

I don’t think it was the licorice root-I like licorice. The flavor I did not like was the spiciness/bitterness at the end of the ginger taste in the tea that gave me a bad taste in my mouth (almost like they put crushed peppercorn in the blend). I am confused as to what ingredient could have caused that…