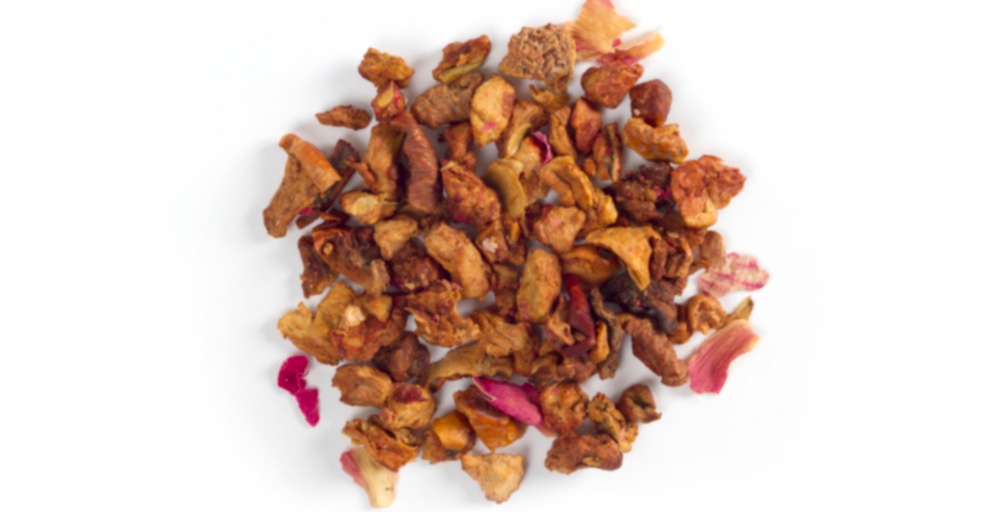 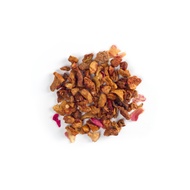 with 48 Ratings Rate this tea Rate This Tea

This summer, we decided to make the best iced tea ever. It had to be sweet and fruity, but a little bit tart. Familiar, yet unexpected. Delicious on its own, or with a splash of gin and a mint spring. In a word, perfect. And after searching high and low, we found a tea that fits the bill. A bright, flavourful blend of pear and apple with a hint of vanilla, it’ll quench your thirst but leave you wanting more. As if summer wasn’t already perfect enough…

This one is pretty good cold brewed. I mostly get the pear flavour and then I get some light hints of vanillla. I think they go together fairly well. It isn’t as sweet as I would have thought maybe, but I will still drink numerous pitchers of this in the summer.
Bumping the rating up a little bit.

I think I dislike this tea more and more each time I drink it. Thankfully, it’s all done now. No more apple cider vinegar tasting hot water! On to better teas that deliver the taste it promises. Although this isn’t the worst tea I’ve ever had, it doesn’t taste like pear, and it’s far from perfect.

The last iced tea for today that finishes off a package.

Although pear-y, this one was too tart and strange hot. Not a big fan. Unfortunately, it still misses the mark iced. I did use an appropriate amount of tea:water, so the flavour’s strong, I’m just finding something a touch off with the flavour. The aftertaste is creamy, vanilla-y, pear-y and lovely, and I can even handle the tartness (although it throws me a bit), but they just don’t combine well for me. That said, it’s way better iced, and is growing on me as I get through the cup, but I won’t be purchasing anymore of this one. If the tartness could only be reduced somewhat, I think it would be lovely as the aftertaste is just perfect…

I like pears. This doesn’t smell like pears…It smells like bubblegum with some sharp fake pear on the end. The “pearness” is reminiscent of a jelly belly rather than a real pear (bosc or otherwise!) The bubblegum smell is starting to really make me mad, I have experienced it in so many of the DT blends from the last year.

Steeped five minutes or so, warm yellow colour, reminiscent of a pale ale. The taste doesn’t match the aroma, but like some of the others, I get more tart apple than sweet pear. If I even got tart pear I’d be okay with it, but I don’t get pear at all. There is a creamy sweetness at the back of the sip that I think is the vanilla – it’s not a bad blend and I’m not getting bubblegum anymore, I just think it’s misleading to call this Perfect Pear.

Actually, as an apple tea it’s quite nice. I almost wish that vanilla weren’t there though. It’s not quite working for me.

I agree with you, David’s has a lot that smell like Bubblegum. I think Orange Blossom, Whiskey White and Persian Apple all have that bubblegum smell… it’s weird

I noticed that bubblegum smell with one of their teas also, but I can’t remember which one…
I’ve got a sample of this one that I’ve been putting off trying ‘cause I don’t care for pears at all, but now I might just have to try it and see how I feel, especially if you weren’t getting much pear from it.

I’m not a huge fan of pears, so we’ll see how this goes…

And, I take it all back! This tea is surprising in every way. I was expecting something akin to Cranberry Pear—which tastes alright, but lately I’m not really feeling the fruity + black/green teas—which it isn’t at all! Upon brewing my husband remarked that it smelled like, and I quote, “South African cream soda, you know, the green kind!” and I suppose he’s right. The taste though is beyond delicious!

I thought that I would never find anything remotely on par with Luscious Watermelon in terms of pure, unadulterated fruitiness, but I was wrong. So wrong, in fact, that I brewed all 20g of this tea then promptly returned to my local store to acquire more! Lately I’ve been brewing it double-strength + mixing in a dash of raw sugar + putting it in the fridge to cool. Once it’s lukewarm I pour it over ice, then take my tastebuds on a journey to paradise.

I’m excited to try this. I got a sample with my order.

Free sample from the last time I ordered. I waited to try it until I could get my camera/computer working together again… the card reader isn’t working anymore, which is annoying, but I suppose I’ll muddle through. Anyone want to chip into the Shell Buys A New Computer fund?

Onto the tea then. It’s a fairly light colored tisane, sort of like the inside of a pear! There’s a tartness to the flavor that I wouldn’t necessarily consider a pear. Looking at the ingredients, I see apple – that’s exactly it. It’s a decently authentic apple tea with pear at the finish of the sip.

I might like this more if it was marketed as apple-pear… when I expect pear, I expect pear. Especially compared with the Caramalized Pear from Art of Tea that recently came in Steepster Select, this just doesn’t cut it for me.

It is a good tea, though.

UPDATE: Oh, this shines on ice. Just noticed that David’s actually recommends it. The apple takes a backseat, and it’s all pear and vanilla. I’m considering buying some now.

I got some in my order that arrived yesterday. So, ice it, got it!

Yes! Just go straight for that!

I just drank this hot and wrote my tealog, but now that I read your comments I will have to try it iced. Hopefully I will also see an improvement in the pear taste.

This tea smelled like a ripe, juicy pear as it was brewing and I was eagerly anticipating that first sip. Too bad the intial impression was that the tea tasted very tart and nothing like the scent at all. It tasted like it had a ton of hibiscus in it, but when I looked at the ingredient list there’s nothing on it that should be causing such the tartness. 0_o

After that first burst of sourness faded I could taste some actual pear flavour, but it was subtle and left behind more tartness in my mouth after I swallowed it. I’ll try icing the rest of this cup to see if that improves the taste at all. Stay tunned until tomorrow.

Oof sour! Wow this tea was a bit too tart for me.
Even all sugared up :)

I’m not going to rate the tea because I really don’t like pear! But I loved it in the Cranberry Pear blend! Ah well. All i got was a sharp, super tart taste. I added lots of sweetener and it was iced, but no go! Oh well

I was so surprised at how tart it was! I thought a pear tea would be more mild.

Me too! Especially one with no hibiscus – I really wasn’t expecting it haha

Perfect tart is more like it. I steeped it hot then poured it over ice, using the whole sample for a cup of water. I think I meant to use half a cup so it’d be really strong but my brain is mush with production possibilities frontiers. I’m actually glad I didn’t do that.

Smells like pear, that’s for sure. I had to add sugar though, because it was just all around tart before that. Now it tastes like pear up front, but it has this weird, tart aftertaste. And actually, tart is too nice. Sour is more like it.

If it wasn’t for that, this would be pretty good. But on the plus side, that’s one less tea I really want. Now I really want a real pear. Poor pears, I wish they could be well replicated in tea.

I will finish drinking it though because it is above what I am studying in less painful things to subject myself to right now.

Yes! Sour is the word I was looking for when trying to describe why I didn’t like it…

Definitely sour… and not in a good lemon-lime way…

Flavour: Very sweet and delicious pear flavour – this is not a subtle blend and makes an excellent iced tea. Variety of pear is the Bosc (AKA “winter pear”).

This one could be good will have to try