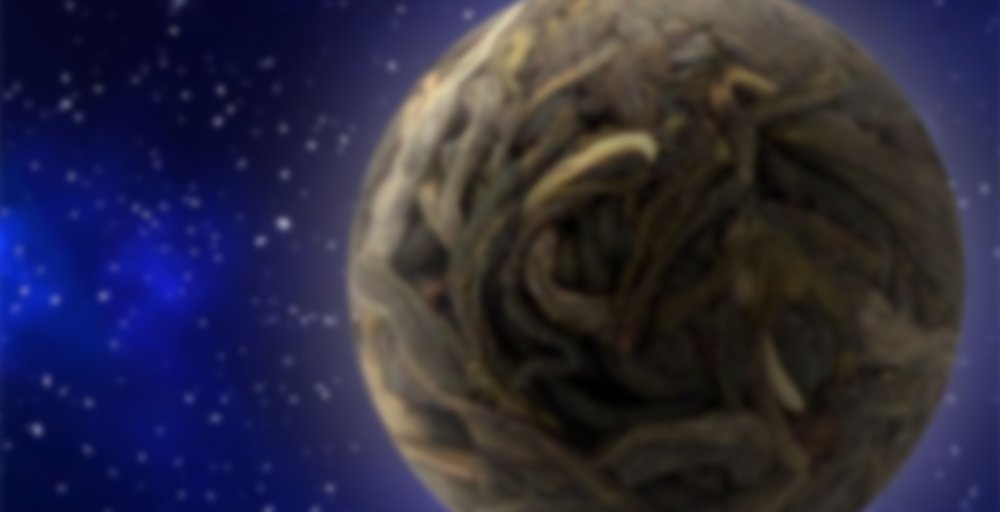 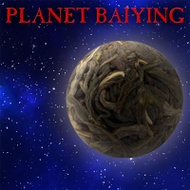 by Crimson Lotus Tea
76
You

“A world of flavor in the palm of your hand!” This is a new planet in our Yunniverse.
Don’t let their small size fool you. These tiny spheres of puerh are made from Baiying Shan big tree material. They were picked and processed in Spring of 2015 and were pressed in the Spring of 2016. This tea has a heavy body with vegetal / beany notes.

30s rinse, then tried to press the gaiwan lid into it (uselessly), smells a bit sweet. Then I followed the actual instructions and waited for a few minutes before trying to press the lid into the ball again, at which point I was able to basically break it in half with the lid.

30s: Weirdly long, but the instructions recommend that for the first steep to finish breaking it up before brewing normally afterwards. Looks cloudy. For the first time, I’m totally getting what folks describe as “beany”. No other word fits better. (I want the Rancho Gordo folks to try this tea!) Smooth, and there’s a nice huigan that shows up eventually.

9s: Even beanier, with a bit of vegetal bitterness adding some interest. This is so weird and savory, a light but flavorful bean broth. I think this is the best go I’ve had at a dragon ball, gotta remember that this really is the right technique! Makes me more open to them, though I still dislike how big they are (I often prefer 4g to 8g when drinking alone!).

15s: Notably more bitter. It’s not overwhelming, more like instead of plain beans I’m having collards and beans for breakfast. It’s actually pretty yummy, in an unusual way. Maybe I should make actual beans with collards and pork for dinner, that’s sounding really good right about now. After the sip, there’s way more sweetness in the back of my throat than before, and very light stonefruit in the gently cool huigan. I keep liking it more and more.

20: A bit less beany, maybe some… citrus? And the start of mild astringency, very light mouth fuzziness and then brief stickiness.

25s: The citrus is early in the sip, then it’s beans again, and the astringency is getting a bit stronger. The end of the cup as it cooled a bit had some more bitterness, briefly. Then, again, sweetness in the back of the throat and maybe an earthier cool breath after.

30s: The savoriness has become just sort of a muted base. Some citrus remains. The fuzzy stickiness remains mild but present. The ending bitterness goes further down my throat, takes a bit to fade into moderate dryness. My forehead is starting to feel a bit heavy.

Later steeps became sort of citrusy (but without being sour!), with everything else about it becoming less intense. I didn’t get much energy or body feels aside from that bit of head heaviness, but I really liked the flavor and the aftertaste for a while there and could imagine maybe grabbing a few more at some point just for the yums.

I received two samples with an order.

The dragon ball was easy to unfurl and made for an enjoyable session.

It isn’t complex but the qi is pleasant, it would be a nice tea to take along when traveling.

I enjoyed the W2T Smooch. The single serving pieces are actually quite easy and fun as free samples. Can’t actually see myself buying them though.

Brief note: Smooth, neither bitter nor astringent. “Light” texture and profile, but once I had increased the temperature, it seemed to progressively increase in strength.

I really enjoy rolled puerh, for they are perfect for when I am traveling. I can fit them in my teaware pouch and just pop them into the pot. This rolled ball is very very dark leaf and gives off scent of sharp greens like bok choy, kale, and some sweet wood. I warmed my pot up and rolled the planet inside. The scents opens into some off metallic (iron) scent with the same greens. bitters, and roasted asparagus. I washed the ball twice and prepared for brewing. The taste begins sweet and green with green bean notes. I can note some huigan that is delayed, but it sits nicely and lightly in the back of the throat. The grassy tones give a warming feeling on my forehead, and I can note a faint amount of smoke in the background of my brew. The brew continues in the fashion. The later steeps give a slight lemongrass bite. This tea does lack complexity, thickness, yada yada yada, but its inexpensive and rolled, so you can’t complain too much. The qi is nice and gives me a good spatial feeling.