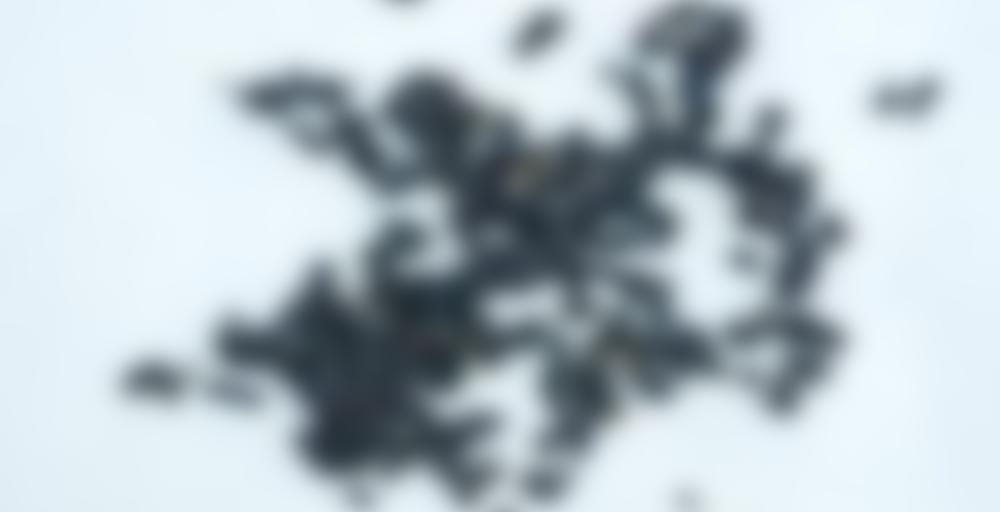 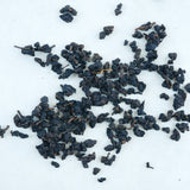 Tie Guan Yin is perhaps the most famous of oolong varieties because of its complexity and resilience. That resilience is one of the reasons it was chosen for heavy roasting, which is one of the most traditional preparation methods. This tea is as pleasant as a cup of coffee on a weekend morning.

Tei Guan Yin was one of the transplants from China that thrived in Taiwan. No single variety will grow the same and with the same characteristics in two different places. This Tie Guan Yin is from Nantou County in the central mountainous region of Taiwan. Quality heavy roast Tie Guan Yin is hard to find in China these days, as they tend to roast them much lighter.

In the roasting process, most of the floral properties of a high mountain oolong with be given up in favor of the warming and mellow properties of roasting. This Dark Roast Tie Guan Yin was chosen for heavy 80% roasting because it had a strong vitality and qi. Therefore the final product became two-dimensional: both strong roast and strong body.

Brew this tea longer to bring out the depth. I recommend 200 degree water with at least a 1 minute infusion. There is no astringency in this tea, so feel free to experiment.

Only had gongfu and was definitely better in the clay gaiwan than the porcelain pot. The clay muted some of the roast, though by now, several years after I bought this tea, it is mellow.

The brew was surprisingly complex and gentle. Thick, sweet mineral water body with a sheer overlay of pear florals, chocolate and dried fruits. Very warming, spicy chili pepper feeling in the mouth, a bit of a throat catch from the lingering roast. Plenty of spices like cinnamon and nutmeg were revealed later along with caramel, earth, grass, pine, cedar and coffee. Lingering mineral-caramel aftertaste turned to apricot skin. I noticed the aroma later with hazelnut chocolate and with this, the taste became more like roasted nuts, plant stems and camphor.

Really well done traditional Taiwanese tieguanyin dark roast. The roast brings out all those complex sweet, dark and fruity notes while leaving the liquor rather light and playful. Pleasantly warming for a December day.

At last! An oolong that can stand up to my barbarian abuse! Early a.m., western style, time around 3:30 ish, maybe, while I was rummaging in the fridge for my work lunch—-and delicious all the same. I’m seeing all kinds of taste comparisons in the reviews, but I don’t believe I see raisins and good fruitcake yet, so I’ll just throw those in there.

My tumbler rode to work with me, but didn’t last very far past my office door. Good stuff!
(I hereby nominate derk for “Donor of the Month.”)

Apparently a good tea when it is finished before the job :)

I’ve also polished off good teas without spending enough time analyzing the taste. Also, Derk is absolutely the donor of the month, and I’ll be working through the teas she sent me for quite some time. :)

This is another tea from derk!

I wanted something to go with a blueberry croissant from a local bakery. It was almost more like a Krispy Kreme doughnut with blueberry filling. They are delicious but almost too sweet for me. I thought a nice roasted tea would offset the sweetness perfectly.

This is one of the darkest, most heavily roasted oolongs I have ever had – and I loved it. I do not like coffee, and I have tried to wrap my head around what it is that people like about coffee. When I have tried it, it is so bitter and strong that I just don’t get it.

Tonight, this tea made me almost get it. There was something about it that made me think of coffee, but I loved every sip. It has light body but such richness, like nearly burnt toast and roasted nuts – maybe toasted pecan? – and smoke. The flavor of the tea more than made up for the overly sweet dessert.

Thank you, derk, for a lovely tea experience!

Taking note. This is the type of oolong my hubby likes best.

derk – it was delicious! My husband had picked up the croissants for the virtual baby shower for our soon to arrive grandsons!

Gmathis – I highly recommend it! I think he would love it!

Will your grandsons be near ashmanra?

gmathis, I’d be happy to send you a sample to see if it’s something your husband would enjoy.

You aren’t old enough to have grandsons!! Twins, more similarities among us. Must be something in the family tree cousin, I have twin grandkids too.

Derk, we’ve never turned down a sample of anything, but absolutely no hurry. You enjoy it first.

I have to be about the worst promoter ever. If not the worst, I am certainly one of the most easily distracted. I received several free samples from Totem Tea quite a few months back that I was supposed to review here. Naturally, I opted to prioritize the teas on which I was already working and never got to them as promptly as I should have. This tea, in particular, was one that I promised to review at least 2-3 months ago. I finally got around to drinking it and taking session notes back around the start of the month. Three weeks later I am just now getting around to writing about it here. Overall, I found this to be a very nice dark roasted Tieguanyin with considerable depth, complexity, and longevity both on the nose and in the mouth.

Prior to the rinse, the dry tea leaves emitted aromas of char, dark wood, cocoa, and cream. After the rinse, I noted the emergence of some hints of butter and spice, though for the most part, the tea’s bouquet did not change much. The first infusion then brought out scents of cinnamon and coffee. In the mouth, I found mild, subtle notes of charcoal, cocoa, dark wood, and cinnamon that gave way to equally soft, subtle notes of butter and cream toward the swallow. The subsequent infusions saw the darker wood notes lighten and start to differentiate into more distinct impressions of maple, cedar, pine, and spruce. New notes of vanilla, damp grass, cattail shoots, brown sugar, banana leaf, minerals, nutmeg, graham cracker, roasted peanut, caramel, brown toast, and molasses gradually appeared. Stronger notes of butter and cream came out on these infusions while the previously absent impression of coffee also finally made its appearance in the mouth. The later infusions retained notes of minerals, wood, charcoal, and cream that were a little stronger than expected. I could also still pick out some distant notes of cream, vanilla, caramel, cocoa, and coffee in the background.

If you have ever had a roasted Tieguanyin, the aromas and flavors this tea offers will not likely be new to you. It must be said, however, that the aromas and flavors this tea offers are far stronger, far deeper, and far more persistent than those of many similar teas that I have tried. In fact, it is getting rather difficult to find true dark roast Tieguanyin, as many roasted examples of Tieguanyin these days are usually either light or medium roast teas. Probably more for the aficionados of heavier roasted oolongs, this would still be an excellent tea for anyone with an interest in such teas. Definitely consider this one if you are looking for something more challenging.

I am guilty of this too.