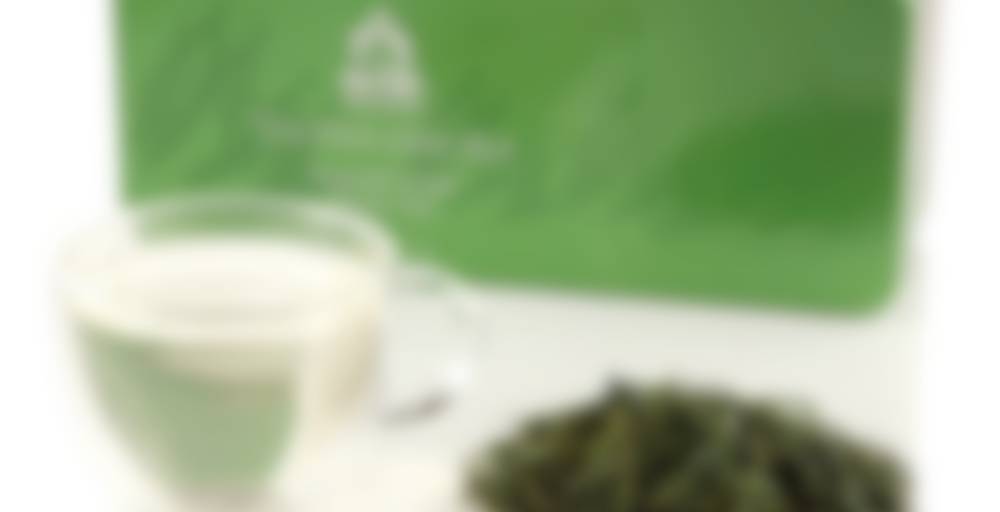 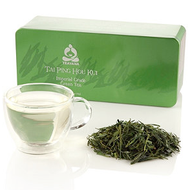 This rare ‘Top 10’ Chinese green tea has been produced by hand for over 100 years in small villages. The long, straight leaves resemble ‘two knives and one pole’ with two leaves embracing a tea bud in the center. Plucked from the Shi Da Cha variety tree, after withering and steaming, the leaves are carefully pressed flat to dry. Once infused with water, the leaves gracefully sway, described as a ‘phoenix dancing.’ This unique process yields a sweet, delicate mellow cup. Excellent for multiple infusions. Sold in 2oz (56g) portions pre packed into a special tin. IMPERIAL RESERVE

Autumn_Aelwyd wrote on this one, “best brewed in glass”

NO KIDDING! These leaves are enormous. And flat. And long. And broad. They’re great big flat leaves. I’ve never seen leaves like these before, and had some trouble working out how to dose them. I think in teaspoons, not grams. The whole idea of thinking in grams, outside of the moment of purchase, is completely alien to me, so I was a bit stumped. In the end I went by eye measure.

The glass recommendation was all nice enough, but I wasn’t really able to follow it. We’ve only got one glass pot, which is the one I made some for the boyfriend in (Western style) and the smaller one that I use for myself is my beloved bone china one. The glass pot for the boyfriend is one of those with a french press infuser, which I had to take out. I just couldn’t see how these enormous leaves could ever work in the infuser. Which of course also means I had to give it to him without a lid. I just saw him fetch a pre-emptive rag from the kitchen. Probably a wise move.

Anyway, for myself I made a short steep and the colour was so pale that I suspect I could comfortably have used a couple more leaves. Or leaf sheets. Or whatever. As it has cooled a bit while I wrote this, the colour has developed a bit in the cup, though.

I can’t find much in the way of aroma. There’s a warm softness, but I don’t think it’s anything more than the warmth of the liquid. There isn’t a very strong flavour either. At first go, it’s a bit chalky and mineral, but then slowly this stewed spinach-y flavour sort of unfurls, spreads out and disappears with the swallow. Just as I tasted that, a large flower bud opening and blooming actually showed up quite vividly in my head. That image was exactly the way the flavour developed. (It was a large pink and white flower with many petals if anybody’s interested)

I was a little disappointed by the next few sips which didn’t give me this unfurling experience. It was as if the first sip had merely primed my tastebuds so they were now all ready to receive. But I quite enjoyed that unfurling.

The second steep is a little more mineral and a little less spinach-y but still much the same as the first. Quite nice with a handful of cherries. Om nom nom cherry season!

The third steep has developed a little aroma. Just a wee smidge, but it’s that stewed spinach note from before, I think. The flavour is still very mild and a little meek, but it has as good as lost the chalky note at this point. It doesn’t strike me as very spinach-y anymroe either. Now it’s sweeter and reminds me more of freshly shelled peas. Or perhaps more along the lines of snap peas or snow peas.

On a final note, the boyfriend also reported that he had enjoyed his western style brewed pot quite a lot.

Yay for Anhui greens! I know they aren’t necessarily your favorites, but I love your green tea reviews.

Many thanks to Autumn Hearth for this.

I don’t really know how to measure this, as the leaves are so long and flat. I ended up just putting maybe seven or eight leaves into the steeper and winging it. I also didn’t time it as maybe I should have – just however long it took for me to rinse out my mug etc.

But even still, it’s good. The liquor is very pale, almost white, and it tastes like a very light green tea. It’s good. It’s soothing.

Sweetest Green tea I’ve ever tasted, and the longest tea leaves I’ve seen from any retailer. The leaves are gently rippled from the press, resembling zebra stripes and lying beautifully flat. A truly two-leaf, one bud tea. Using three pairings per every eight ounces, I brewed this for two minutes at 170 degrees Fahrenheit two consecutive times. A fruity note, with a mild vegetal undertone accompanied a mostly sweet flavour. The tea leaves are supple and green after brewing twice, and the colour of the brew is a faint yellowish green. Two ounces of the tea gets you a large amount of tea, as this is extremely light and voluminous. I’m estimating, that with the given suggestion of three leaf pairings per 8 oz, that each box has well over one hundred servings.

I must be brewing it wrong, i find little to no taste to the tea.

How are you brewing it? I believe I used my standard green tea parameters on this one: 170F, 1’, using about a cup of water for every one tsp of tea. It may be finicky, in that anything over 185F may scorch it. I’m not certain, but I may have also brewed the first steeping for two minutes (as he notes in his review).

This is quite possibly the best green tea I have ever tasted. I hope you can coax it into giving you some of the gifts it has given me!

I will try again. i don’t think i was using enough tea.

I actually blended two one minute brews together, by simply re-infusing the tea after removing the leaves. Unfortunately, we’ve discontinued this gem. If you can find it, it’s 75% off.

Back logging from yesterday when I had a horrible migraine, that kept me in bed at my parents house, while they entertained my son, most of the day. When the husband came and rescue us, we came home and I brewed this. I have two supplies of this. One in the long green tin pictured above that I got on sale 75% off (all my customers bought one too because hello $7! The other is in the Forbidden Kingdom Collection, also on sale, which is the one I chose to open. There was .64 ounces in the tiny foil bag that I thought could not possibly pour into the small square tin. It is actually a lot of tea as some of the leaves are over 3 inches long.

I really did forget just how large they were, we tried it once at work over the summer when we had first gotten them in. Our barista made the brewing seem complicated and let them sit too long waiting for the leaves to dance. It didn’t result in a bitter brew, just a very bland one. But this tea is meant to be brewed in glass and is perfect in my glass infuser mug. I simply preheated, then poured the water against the wall of the mug and voila! Beautiful phoenix dancing! Though honestly it reminds me more of mermaids as the long green leaves move like kelp but either way, beautiful.

I steeped for 1 min, though next time I’ll try it for 2 as the reviewer above mentioned fruit notes I didn’t get. What I did get was sweet, very very sweet, only green tea I’ve had that was possibly sweeter was Fuji served at NoodleCat which I need to go back to both for the noodles and to get the name of the woman who locally supplies their tea. But yes, very sweet, but not much else going on, sure the brewed leaves smell vegetal, but there’s not a hint of it in the brewed cup. Subsequent steeps were mild as well. Still this was lovely to watch brew and to sip on and well worth the price.

I was deeply lucky to get a large tin of this on sale. It takes a bit of extra work to get this right, but I would go by instinct if you don’t have anything to measure the temperature or the leaves out of this. Sometimes I would add a bit more leaves for a stronger flavor, and even if the water is too hot, it really isn’t that bad at all. It’s flexible, but smooth. You can’t really go wrong with it. I never had a bad brew with this.

Enormous leaves – I brewed with three long and two short leaves and that seemed to work fine.