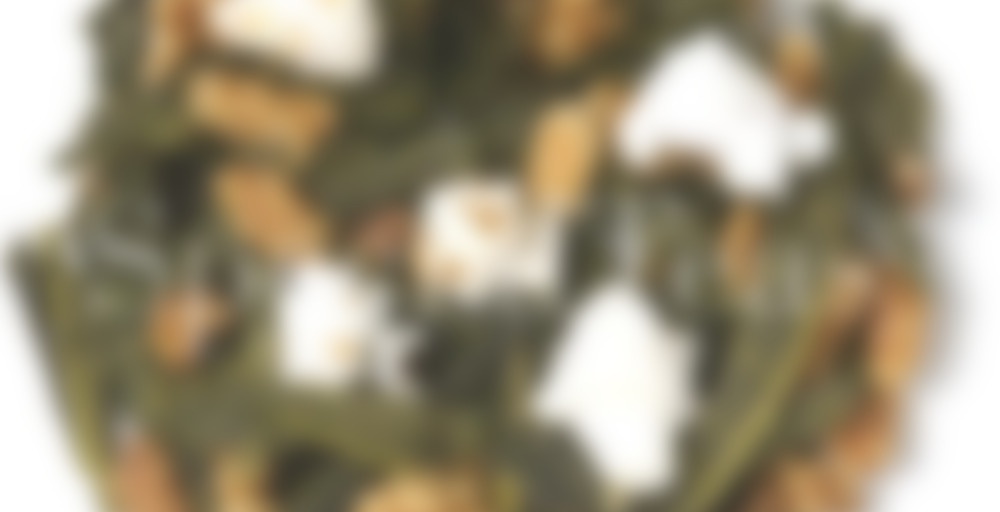 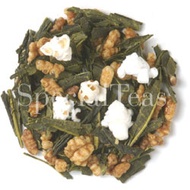 Genmai-cha, a Japanese specialty, stands for “brown rice tea”. Green tea is blended with roasted, partially puffed rice giving it a “toasty” flavor. The quality of Genmai-cha varies widely depending on the base tea used. While most Genmai-cha sold in this country is based on larger leaf Bancha, this specific grade consists of a blend of Sencha and fine Bancha, making it very fragrant and aromatic. Genmai-cha is lower in caffeine than other green teas.

Aha! This one came from Wombatgirl (who hasn’t been around here lately, what’s up with that?) and I know this because I have posted about it before.

I went and asked He Who Was Foolish Enough To Propose how traditional he was feeling this morning, tea-wise. He looked at me funny and asked me if I was planning something crazy, to which I could only reply yes. I would have preferred to take him by surprise, but he made me tell him what the crazy was before he would give me an answer. Where’s his sense of adventure?

Anyway, the crazy was brought on by a flash of inspiration caused by the first post I saw this morning being from Dylan Oxford who was enjoying his favourite genmaicha. This was shortly after I had breakfast and aforementioned male occupant of the household hadn’t got up yet.

The first time I had this I said that it was all rice and not so much leaf. Actually I don’t know if it’s the ever on-going practise that has changed my mind or if it has just deteriorated a bit due to age and haphazard storage.

The flavour is very rice-y and starchy with a touch of salt, but underneath that I can definitely pick out some green tea. There’s a strong note of something vegetal and relatively darkish. It doesn’t quite have that vibrant dark green hue that I get from Sencha but it’s leaning towards that side of the spectrum. It’s like, I know there is that colour in my head, but somebody dimmed the lights so I can’t quite see it.

This makes me want to get back into green teas that aren’t flavoured with something else. That, Steepsterites, is HUGE! I’m a black tea drinker all the way, but right now? This stuff is inspiring.

Inspiring indeed. The recent ratings from you, Dylan, and Azzrian have inspired me to order some for myself.

Congratulations on his foolishness. Condolences on his lack of craziness.

I’ve been looking up genmaichas on line. I suppose I must be a bit lacking in craziness, too – because I ain’t trying it. If we put up with things like this, next thing you know, some daft person will be trying to add bergamot to their tea.

Reminds me of the time I tried muesli – took me till lunchtime to chew my way through it, made my jaw-muscles ache – and then I dawned on me that the breakfast-cereal makers had conned me into eating the same stuff as I was feeding my parrot.

You have made references to tea genders in previous post, genmaicha feels like a man tea to me! love how it picks me up in the morning (ok, too much information!). The male of our house also likes it a lot, so I hope your soon to be hubby enjoyed your «crazy choice»
Have a great green tea phase!

Blake, I hope you enjoy it.

Alaudacorax, oh genmaicha is quite common actually. :) My boyfriend didn’t care for the toasted rice either. I think I’ve also got a toucha of sticky rice pu-erh lying around. I suspect he wouldn’t care for that one either. As for the muesli, you DID put milk on it, right? Anyway, I feel the same way about raw carrot and most nuts. It’s like eating a stick.

TheTeaFairy, this one doesn’t have a gender to me, but it did have a colour. Of sorts. I find that most of the time if a flavour has a gender or a colour, it’s usually one or the other. I won’t say it’s never both, but it’s more rare that it’s both. My boyfriend didn’t much care for the rice.

I’m glad I could be inspiring! I think I owe you an apology, it wasn’t until this morning that I realized I wasn’t following you! Not sure what happened there, but I’ve definitely been missing out.

@Blake – if you haven’t actually committed to that order yet, I’d be happy to send you a sample.

Dylan, that’s fine with me. I’ve stopped paying attention to who’s following or not following me, and I’m paying even less attention to who I’m following these days, until such time as I need to send them a PM. :)
I never really read from the dashboard page at all, apart from the notifications. I prefer to use the all recent page. That way I can stick my nose into keep up with everything :)

@Dylan – That would be wonderful man. I was planning to order some today, but I had to cancel the debit card I would have used (fraud is fun), so it’ll likely be a week or so before I’m ordering anything. Check out my cupboard and see if there’s anything you and Missy would like to try.

Genmaicha is the bomb. Glad you’re looking into trying out them green teas again.

Incendiare, I’m currently talking my way out of running out and buying a load of greens. Partly, as mentioned before, I’m sure, I’m not allowed until the other side of the wedding, and also partly because I’ll just wind up with a lot of stuff left over when the interest wears off. I’ll definitely have to dive deep in the sample box though. I know there’s a ton of stuff gathering dust down there.

Ah, well that’s smart. I’m sure you have some good samples that can tide you over until later on.

That was supposed to be talking myself out of etc. and so on, actually…

Lazy Sunday in front of the computer – this is exactly what I needed. YUM.

delicious. it took me a while to come around but this tea is sweet and the toasted rice makes it so unique (and delicious). it does kind of remind me of smacks cereal, but i like that.

Hey, where did you get the genmaicha?

And OOhh…this is soo cool! How come nobody every told me about this site before??!!

I love genmai cha. It’s a nice crisp, clean, almost savory contrast to the sweetened black teas I like to drink in the morning. I always need to have genmai cha on hand.

This is a really nice, smooth genmai cha. It’s close to Adagio’s, which I had been drinking, but I think it’s a more well rounded cup of tea. The dry leaves are also longer, brighter green, and have a fresher scent. I ordered 1/4 lb… great price for it too!

I never used to like genmaicha, but this one is very good. Amazing how much each genmaicha tea can taste different. Held up for a second brew. Thank you wombat for a taste of it! This was a pleasant tea iced, too.

There’s something really comforting about Genmaicha. It’s one of those ones that I always want to have in stock, although I’m going to have to find a new one after this runs out since SpecialTeas went belly up. This was a good, reliable Genmaicha and forgiving when I felt like I got the water temp all wrong.