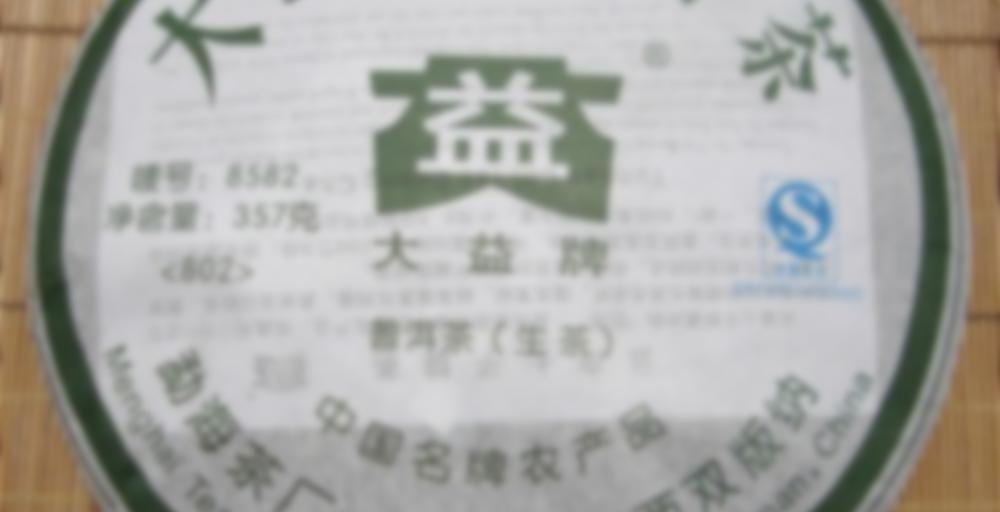 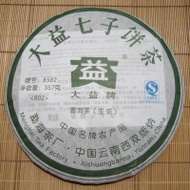 by Menghai Tea Factory
82
You

8582 is a classic Menghai tea factory recipe that was first introduced in 1985. Although the leaves used are coarser and larger than 7542 and 7532 recipe cakes many people find this cake to be superior in taste and smooth after-taste.

The Chinese Tea Shop (Vancouver, BC) 79

I have enjoyed 9 steeps of this tea now. I use 3 steeps for the “me” size cup I normally drink. This tea has no astringency no harshness and no “bite” at all. This tea brew a light orange/golden color. It has a light citrus aroma. It taste like a very light green tea with the sweetness of honey to it. I found this to be one of the most enjoyable shengs that I have had. Definitely in the top three. I have the newer versions of this cake and hope they age as well. I was really surprised as this is a secondary code 807 of this tea. Very nice. I will probably buy another one of these.

“I found this to be one of the most enjoyable shengs that I have had. Definitely in the top three.” So why only a 78 pt. rating?

I was getting some cheap glass teapots from Yunnan Sourcing, and I couldn’t resist taking a couple of pu’er cakes as well, especially with the expensive shipping of them. I don’t now a lot about young pu’ers, and I chose to get three vintages of 8582. I have sampled a couple of older 8582’s, and I liked them, and these young cakes where cheap. So I bought this one made 2008, another from 2009 and a third being made 2010. A vintage comparison! Although Steepster doesn’t (yet?) support comparative notes, I’m gonna give some thoughts on the comparison on this single note.

FIrst, they all were clearly the same tea. The taste was about the same, difference was more on how the taste behaved.
‘10 first attacked me with a taste I believe most describe in English as astringent bitterness, but the initial nastiness made room for a liquiricelike sweetness quite common with young cakes. Although first shocking, the initial taste moved aroung quite smoothly, it’s roughness was quite round if one can say like that. Aftertaste was pleasant. I’d say potential, but I won’t probably be drinking this for a couple of years.

‘09 was most interesting one. First I thought this was slighlty more tamed version of ’10, but at some points it gave some weird tastes. It didn’t behave consistently. At some brews this was definantly the weakest one, but sometimes it really shined. I really don’t know why.

‘08 was my overall favourite. It’s taste was most harmonious, balanced. There was quite a bit of roughness, but this tea wasn’t as bipolar as the ‘10 and ’09. If these three cakes really form a valid timeline of aging, I’d say this is my vasual pu’er in a couple of years.

Now the interesting thing is, are the differences in taste due their ages, or are they resulting from different harvests? Their age differences are relatively large, the ‘08 being three times as old as the one from ’10. On the other hand, they are only a year from each other. That will probably clear out in a couple of years, as their relative age difference lessens. I’m excited in onberving the aging of these three.

Woke up over an hour early before I need to head to work so what do I do… pu’erh session of course :)

12 steeps before I head to work. I’ll admit that being tired in the morning I don’t have a lot to say about the tea itself, but it was enjoyable and I feel quite awake. I suspect that once I sit in my chair at work I’ll become tired once again. The taste of this is pure, basic, and smooth.

Another tea from the wonderful boychik

smooth, easy drinking. The first few infusions have that weird taste that is gone by the third steeping. Long lasting. (I have to leave before I’m done, so I’ll save the leaves and finish up tomorrow.)

I’m getting a nice calm from this tea, too, with a bit of energy. More of a focus than a calm, I guess. Hmmm. Hopefully, it helps me with sprints in a little bit.

It’s nice smooth sheng. Few days ago I sample one and felt completely drugged. I wouldn’t really mind before going to bed but it was 2pm and I had to drive to pick up kids fr school ….

I love the focused/calm thing. Sheng is so weird!

It was quite tasty. I may have to get some of this.

love me some sheng!

Gongfu method
5g 100ml 200F
rinse/ pause/ 3/5/5/7/10/15sec etc
i sipped on this tea all day yesterday. its very good smooth solid sheng. Bitterness only at the end of the sip. Quite sweet.
i do like it. Perfect everyday sheng, maybe not too complex. But arent we need those teas that we just enjoy and dont analyze.

Agreed, I like some simple daily drinkers that don’t put me through the thought of “I need to save this rare tea.”

@tea123 yes, i got it from Tuocha tea. They have very good prices but my package took almost 3 months to arrive. I chose the cheapest ship. They were in transit during the summer ;(

boychick, have you tried 2013 yunnan sourcing autumn ye sheng before? It’s a great everyday sheng too

This is an excellent tea. I ordered mine from tuocha. It brews a nice golden color, all the way through several infusions. The flavor is smooth, with little astringency. Some fruity notes come in at the later infusions. It’s flavor is simple but quite nice, and I enjoyed drinking something with a little age to it. I would highly recommend trying this cake if you want to get some idea about what aging will do to a pu erh, and you don’t have tons of money to spend.