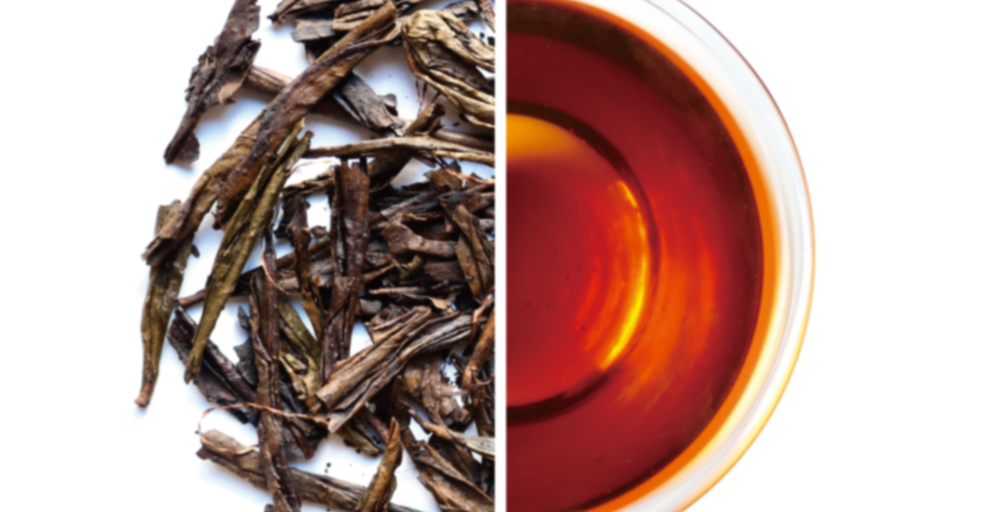 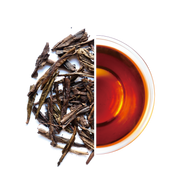 by Kyoto Obubu Tea Farms
82
You

Hojicha Dark Roast has a deep, smoky and slightly sweeter flavour with notes of vanilla and warm charcoal. As a dark roast, it is almost entirely caffeine-free and perfect for drinking at any time of the day or night.

It started with a single cup of tea. As the legend goes, our president Akihiro Kita, or Akky-san, visited Wazuka, Kyoto one fateful day. At the time, Akky-san was still a college student in search for life's calling. After trying the region's famous Ujicha (literally meaning tea from the Uji district), he immediately fell in love and his passion for green tea was born. He had finally found what he was looking for in that one simple cup of tea. After fifteen years of learning to master the art of growing tea from tea farmers in Wazuka, Kyoto Obubu Tea Farms was born and as they say, the rest is history. So what's an Obubu? Obubu is the Kyoto slang for tea. Here in the international department we call ourselves Obubu Tea. That's "Tea Tea" for the bilinguals. We love tea so much, we just had to have it twice in our name. Now Obubu means more than just tea to us. It means, family, friends, passion and the place we call home. More than just tea. Though the roots of Obubu stem from tea, it has become more than that over the years. Obubu is an agricultural social venture, operating with three (1) bring quality Japanese tea to the world (2) contribute to the local and global community through tea (3) revitalize interest in tea and agriculture through education.

This is deliciously roasty. I love the buttery-caramel taste to it. Silky yet rustic.

One of the best Houjicha teas I’ve come across yet.

Darn just ordered the regular roast and was contemplated the dark. Ahh, well next time.

I haven’t tried the regular roast… but I look forward to hearing about it from you. I really like the dark roast though!

Mmmm, I’m a fan of pretty much anything dark roasted.

Whereas the loose leaf is DARK the infused tea is not. It sort of smells like roasted nuts with a musky smell of mushrooms hiding underneath. The taste is quite good tho! Probably one of my favorite Houjicha’s to date!

The name of the company is just too cute, “Oh boo boo”! haha!

I drank this Dark roast along side the Light roast version.

This tea is rich, earthy and smokey. The smokey is quite different than other smokey teas (ie campfire smokey) but more of a roasted nut smokey. The 2nd steeping was Amazing! Deep, chocolately notes – like a smore without the marshmallow. This one is not as sweet as the light roast, but pretty good. It almost similar to a black tea but is sweeter and not as thick in flavor.
I’d be tempted to purchase more, but I think I need to get my claws on the “Smokey” version first to compare.

Full review on my blog, The Oolong Owl http://oolongowl.wordpress.com/2013/07/18/houjicha-from-obubu-tea-via-yunomi-us-mystery-tea-samplers-club/

The wet leaf smelled incredible — strong notes of chocolate, with cherries and cigar smoke also in the aroma.
The taste, while nicely sweet, lacked depth (for me at least) and didn’t have all the flavors or aromas the wet leaf seemed to promise, so that was a bit disappointing.
I do like it, and it is slightly difference from regular houjicha, so I’d almost be tempted to seek it out. But the sample wasn’t quite convincing enough to put it on a list for when I’m looking to get houjicha.

It’s somewhat impressive that Obubu puts out 4 different kinds of houjicha. I wonder how difficult it is to have consistency of roast — what’s the difference in the roasting process between light, basic, and dark? Seems it could be quite difficult to do it consistently.

I was not expecting to like it. I read in the reviews the word “smoky” and mentally wrote this tea off. Wow, this tea makes me rethink houjichas! Deep, robust, very chocolately. So dark and yum. It’s a sweet kind of smoky likeness. I’m going to try the latte recipe on Obubu’s website. That sounds pretty delightful with heat of the summer day.

This was an unexpectedly delicious tea. I’m usually wary of dark roasted tea which often taste like ashtray to me so the idea of a roastier hojicha didn’t immediately grab me. However I’m glad I didn’t judge a book by its cover on this as it tasted nothing like what I imagined.

Dry leaves had an amazing aroma of mahogany, oak, and sweet tobacco. I steeped just 1g grandpa style in a teabag. Despite using such a small amount of leaf, the brewed tea was super delicious, very smooth and sweet. The taste is like the sweet scent of a cigar in liquid form but without any ashiness.

Thanks for the sample Cameron B!

Houjicha, my beloved. I have been craving this for months.

I had a number of places scoped out to order houjicha from, but of course, I can’t order just houjicha. I mean, I could, but the baseline shipping costs make it feel… not really worth it unless I am ordering several pounds. But several places that offer free shipping with an order minimum have suspended that (a relatively minor, if still somewhat disruptive side effect of living in interesting times). After going back and forth between a few places and waiting longer than I would like to see if the shipping situation changed, someone directed me to Obubu. Not specifically for Houjicha, though I was pleasantly surprised to see the selection, but because I was asking around looking for sencha-specific ‘tea of the month’-type clubs. While their membership program is less an ‘of the month’ club and more like a harvest-based farmshare program, truthfully that’s really a lot closer to what I’m looking for, and makes a lot more sense for sencha specifically. I’m…very intrigued, but figured I should try their tea out first. So despite shipping equating to nearly $20 usd, the most I’ve ever probably paid to have anything shipped in the last 15 years, I put in an order for their 18-serving sampler pack, 80g of basic-roast houjicha, and a futanashi kyusu. Not that I really need another kyusu, but I’ve never had a lidless kyusu before, and it was so darn affordable (cheaper than the shipping, certainly).

Everything finally arrived the other day, and I was thrilled. I don’t think I’ve ever seen such an extensive sampler before. As I was trying to figure out what to try first, I noticed the bottom seam of the dark roast houjicha packet was starting to come undone and a few leaves were escaping. At least that made my choice easy.

In smelling the dry leaves, the first thing I notice past the obvious toasty notes is a faint sweetness. When wet, the first thing that comes to mind is “mushrooms.” Quite different things, there. The liquor itself is… good, but nuance beyond that comforting toastiness I have been craving for so long is eluding me. The first cup I may have understeeped though, I forget this isn’t nearly as delicate as typical sencha. Further steepings seem to bring out a deeper sweetness underneath increasing earthiness, with just a touch of that chewing-on-a-pencil wooden-astringency, but the dominant flavor is definitely that toastiness.

It pretty much hits on what I like about houjicha. Something about the toasted flavor just deactivates my fight-or-flight response and makes me feel cozy and safe. Yet the analytical side of me can’t help but wonder if tea is affected by roasting in a similar way that coffee is, wherein the more it is roasted, the more it just starts to taste like … roastedness, losing any other nuances. In truth, I should have tried the basic roast at least once first to have a baseline to compare this to, but oh well. When I was initially browsing the store page, I was pretty intrigued by the concept of a Dark Roast houjicha, so I’m glad I got to try it.

This kyusu, by the way, is also quite nice. The pour seems better than my other kyusus (which, to be fair, are also inexpensive mass-produced pots), and I am really enjoying the soft, rounded shape. The spout is also wide enough to easily fit a bottle brush and I feel like I can actually see all around the inside, so it should be easy to keep clean. It’s larger than I need, but nothing stops me from filling it only partway, and I prefer that to the recurring problem I seem to have of overfilling my smaller kyusus and making a mess trying to pour them, hah. I think I’ll stick to using this one for a while.

Ooh I love Obubu, and I am actually a member of their tea club! Hope you enjoy the sampler. :3

Grabbed a little sample from the tea box. I’ve enjoyed flavored hojicha in the past, and I think one plain one, but that must have been a lighter roast. To me, dark roast sort of just tastes burnt? Like vegetables that have been left on the grill too long. Really charred. If it had some other flavors in there, maybe I could enjoy it, but plain, it doesn’t work for me.

So after accidentally failing to make the last hojicha into a milk tea (lol), I steeped this one up instead. I figured the darker roast would give a stronger toasty flavor and stand up better to the milk anyway.

But wow, it’s really roasty! Delicious though, the milk really smooths out the rougher edges nicely. I added brown sugar syrup to this one, as I thought it would go nicely with the darker roast, and I think it was a good choice.

I’ve never had a hojicha latte, but this is fairly similar and I really like it! I really need to mix up my 3 Leaf Banana Hojicha powder one of these days…

I love making houjicha lattes! Especially with a dash of maple syrup.

I literally started salivating at the thought of a dark roast hojicha as milk tea! Yummmmm.

Big fan of Hojicha lattes here as well. Sometimes hojicha that isn’t great on its own is transformed with a little milk and sugar.

Exactly, LuckyMe. Sometimes I run into a houjicha that comes out overly “dusty” or more “barky/wood chip” like than that nice, rounded wood note, and then I tend to over leaf those and add milk and a touch of maple syrup as sweetener. Great way to use up otherwise lacklaster houjicha.

One of my other press samples. It came with an origami crane. :)

Happy Summer. Though I made my first iced tea today, I have still been having it hot. This has a nutty/ roast scent, with some sweetness. The flavour is kinda caramel nut, with a rich roast almost coffee taste. There is a little grain/ toast as well.