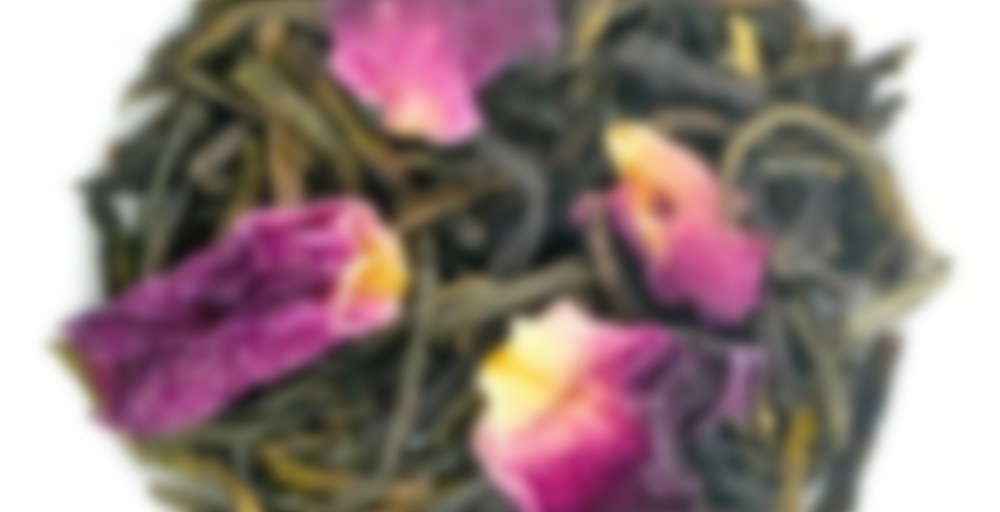 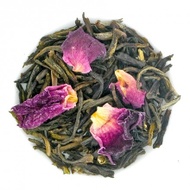 This chinese green tea is furled in rose blooms, hence it has a delicious fine rose flavour.

Tea of the afternoon/early evening here. The dry leaf smells like a flower garden and is very relaxing.

This got steeped for 3 minutes in the Bee House teapot. The tea itself is lightly rosey but it isn’t too strong in my opinion. It has a nice vegetal quality, mixed with the flowery sweetness of the rose. I think I prefer a rose congou when it comes to rose scented teas, but this is pretty nice for a quiet moment. might be nice iced, as well.

I thought of you last night as hubby and I were doing yoga and youngest came in with the dog and stuck dog treats in our ears during final relaxation. I thought, "I bet Amy doesn’t have her final relaxation disrupted like this. " lol!

lol… no! That is one of the benefits of living alone. But I haven’t been doing enough yoga lately myself.

eh, i’m not really a rose tea person. but the good news is that my sister is.
this from the 5 tin sampler pack i bought in paris. and i mostly bought it for my sister cuz she loves the Kusmis a lot. (hahah right on cue! she just sent me an email and i quote "this green rose tea is beautiful. kusmi teas are lovely and subtle but hard to screw up, and really pretty tins. plus lots of flowers. and french/russian. all good things.) i love her.
tea #280 tasted!
wow!

Rather than go through work emails after vacation, I’m sitting here with a new cup of tea and browsing steepster. It’s about all my brain can handle right now.

While I was in Canada, I stumbled upon this great little tea shop and simply had to pick up a sampler pack. These tiny tins are adorable. I think I prepared it right, since the directions are in metric units; regardless, this is a tasty cup of tea.

The leaves have a sort of musty rose scent, not at all what I expected. I’ve only had rose tea in black, not green, so I was a little surprised when I opened the tin. The tea steeps up really light, too; I almost thought I hadn’t used enough leaves (have to guess what 3g is in teaspoons) or I didn’t do it long enough. But I certainly did. It’s definitely a green tea, but has almost a subtle smokey taste to it. As it cools it’s slightly sweeter, but I wouldn’t necessarily call it sweet. It’s just not… intense.

For someone who’s still downing the same mint green tea she bought from Teavana eons ago (why did I buy so much?), this is a nice change of pace. Still my trusty green, but the rose really adds a unique flavor to it.

If I recall correctly 3g should be around a heaped teaspoon or so.

ha! I was a little short, then… some online converter said it was about half a teaspoon, though it’s impossible to scoop such a small amount. Good to know, thanks!

I measured it once. Half a teaspoon sounds weird to me, but then tea leaves are pretty large and would have a lot of air between them so they’d fill more, which something like, say, sugar wouldn’t, so maybe it’s not completely off.

Yeah my “half a teaspoon” was basically a teaspoon anyway, when I considered all the dead space in there :P

You were probably all right then. :)

Reading the other reviews, I really wonder if there are different batches not made with the exact same recipe.
When opening the tin, I was a bit disappointed to see less rose petals in my blend than there are in the marketing picture. However the smell is there.
While brewing, the flowery smell gets quite strong and wafts over the room.
I tried to be careful not to overbrew the first steep and tried it.
Yes, roses and roses and roses with a nice green tea reminding me of green-pasture grass.
It’s a bit too flowery for my taste, though I believe there are not too much rose flavor in the blend; it’s just that I prefer the flowers to be mixed with something else.
The first brew looked a bit murky, not as much as Green St Petersburg, but enough not to look too appealing to me. From the second, it got clearer and nicer. For this first batch, I steeped it 4 times in total and it felt like 1 or 2 more could have been possible. I forgot it for almost 5 minutes at the third steep and positive surprise, it was not bitter.
I may try to mix it with my jasmine pearls, to try to replicate the Pearl of the Orient blend and see if the mix jasmine-roses makes it easier to finish both those very nice but too flowery teas.
I would definitely recommend it to rose and flower flavor addicts.

Uhmm earlier this week, I left it steeping too long (no clue how long exactly); the resulting brew was awfully bitter. I had to throw it away.

Dangit. I really should have converted the Celcius on the package to Fahrenheit. I used water too hot for this tea. It shows. It’s astringent and not tasty.

I want to like rose tea, but I never seem to have good luck with it.

I just have the one teabag that was sent as a sample with one of my Kusmi orders, so I can’t even try again.

I didn’t really know what to expect from this tea—firstly because I’ve never had rose in a tea and secondly because when dry, it had a strong, perfumey smell that was a bit reminiscent of pot purri or even a rose perfume. Well, it’s not great in my books. I’ve not found it truly disappointing or poor quality or anything, but it just has a kind of dull, herby, very faintly peppery kind of taste. It also gets kind of bitter if you steep it for a while, so watch out for that. This tea needs sweetener and is so far the only Kusmi tea that as early as the second steeping has lost significant flavour (in comparison, I drank the spearmint green tea yesterday and got three or four steepings out of it, witht the cool, clean flavour still clearly perceptible throughout). I don’t think the downfall of this tea is its demure quality, because that is also a characteristic of the strawberry green tea by Kusmi, and I thought that was a pretty great tea. I think the problem with this tea is perhaps that the rose flavour, while certainly notable, is not necessarily a good match for the green tea (it may be this type of green tea [a lighter, sweeter, grassier one could work better], but I’m not sure there). This tea is pleasant, but I don’t think it’s very memorable.

If rose is a “thing” for you, maybe you should give this a try, but if you pick it up and think, like I did, that that lavish, rich eastern quality of rose’s fragrance as in rosewater or rose sweets will be well reflected in the tea, I don’t think this will be what you’re looking for. Rose might be a better match for a lighter green tea (potentially with jasmine), or a white tea. A rose fragrance that’s as strong as the dry scent indicates this one is could be really good on its own, too. This tea is basically a good concept executed somewhat unsuccessfully. Overall, I’d mostly recommend this to someone looking for an appropriately flavoured green tea of decent quality to pair with a Lebanese meal. It might also be more interesting mixed with chai or a floral tea of a different variety. There’s a difference when it’s cool, so it could make a nice iced drink with more sweetener or a little something added. It would also probably go quite well with milk.

Was thinking of something light for my post-dinner work… I was looking for Green St. Petersburg but then I realized there was this Rose Green Tea in my cupboard! It was exactly what I wanted because it’s really really light… the steeped tea was almost a clear liquid! The green tea was deliciously refreshing, though I wish the floral note could be stronger.

This was perfect with a berry scone as my birthday breakfast. The green tea had a nice asparagus flavor that highlighted the sweeter rose. It was a sample from a friend who had one pot’s worth left and decided to share it. And my “to buy” list multiplies threefold again…
Great if you want a floral green tea or something that you can smell brewing acoss the room. I’d like to say more but I’m aware my sample was a bit dated.

I used to like it more. Today not so much. My temp was accurate 175 and still as it cooled down I got some bitterness. Rose flavor is nice and delicate.

Steepster is finally back! Now to backlog all the teas I’ve had this afternoon, starting with this one:

The Tea & Cards Teabox came today! After looking through everything in there this was what I went for first. Green tea sounds good right about now, rose is one of my favorites, and I’ve been wanting to give Kusmi a try.

This is an interesting mix. At first I didn’t think I liked it, because it’s strongly bitter, but as I continued to drink it I realized what a complex tea it is. It starts bold and bitter with an almost dried or powdered rose flavor, then slowly mellows out into a nearly candied rose taste. It’s sweet and changes many times throughout the sip, which means it’s anything but boring. The green tea base is sharp at first but then lends an earthiness to the rose flavor.

Usually bitterness turns me off tea, but this is actually growing on me the more I drink it. In fact it’s growing on me so much that I would probably buy it if I got the chance. There’s so much going on here that I’d definitely reach for it again. Thank you for sending this along, Nicole!