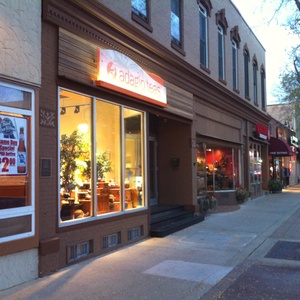 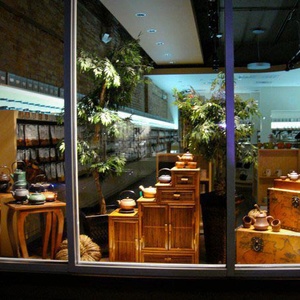 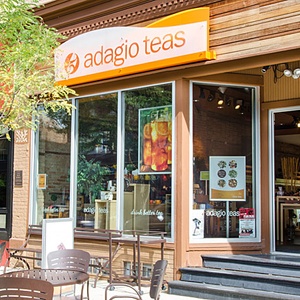 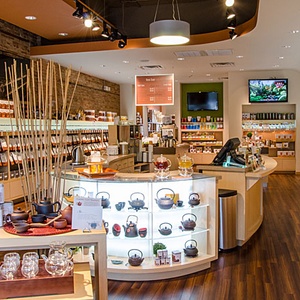 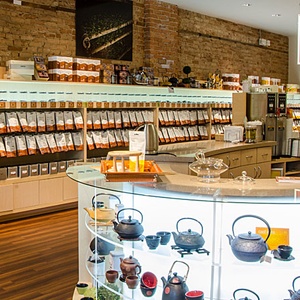 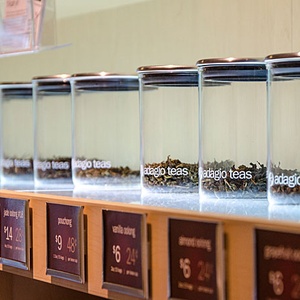 As others have said, this store is set up nicely and has a great selection. Pretty much any tea that you can find on their website is sold in-store…even many of the fandom samplers of custom blends! I also appreciated the little smelling tins they had available for most teas.

However, I visited the store hoping to try samples of teas that aren’t offered in their pre-packaged sampler packs and was disappointed to find that all of their tea is sold pre-bagged in 2oz pouches. Although their prices are reasonable, I still don’t like to commit to that much of a tea I’ve never tasted. In the end, I left empty-handed.

I stopped by here on a trip to Chicago and absolutely loved it! The employees were friendly, knowledgeale, helpful, and would brew you any tea in the store to sample.

The flow of the store was very nice, open, and simple. You walk around the perimeter of the store, find the type of tea you want, then can look at the specfic blends they have.

The tea is at a good price as well as all the teaware/containers/etc. A really great place that I’m sad I can’t visit more often but am greatful for their prominent online presence.

Just fantastic! I have nothing bad to say about my experience here (other than I had trouble finding parking at first as heh heh), the staff was super friendly, knowledgeable and helpful and were happy to make me samples of the teas I was considering! Well organized and accessible, you could buy any tea in loose leaf or bagged pouches (with zip lock seals yay!), and they had smelling jars set up for all their teas which was really great (I ended up buying a tea on smell alone). Also their little “Roots” program where you get to learn more about the tea harvesters was SUPER CUTE. Before discovering this place I would go to Teavanna, but Adagio is definitely the new favorite. I’m super lucky to be living here near all these Adagio stores!

I love Adagio Teas!
I don’t have a store near me…sadly, but I am lucky enough to be in a one day shipping zone so I order from them on-line all the time.

First off, they offer the best customer service. I have never had a problem getting an answer or help when I ask for it. And they are always quick to help. Their staff really know how to take care of customers & that is something you don’t see very often these days.

Second, they offer an amazing assortment of delightful teas. I am a big fan of Forest Berries & Foxtrot. And I love Fruit Medley iced during the hot summer to cool off.

I would love to have a store near me. I would take advantage of their staff brewing cups for me to taste. Till they open one in NY, I’ll keep ordering on-line.

I went to Adagio’s birthday celebration (of their brick and mortar stores) on Sunday and it was my first time here. I second all the great things in the previous review. This place is fantastic! Granted, it was their birthday celebration so things were a bit different than normal and the place was packed but I think I found my perfect tea place.

The store is very organized with teas along all the walls sorted by type. They have herbals, rooiboses (rooibosi?), decafs, and mate’s along another wall, so aside from the mate, they have the caffienated tea seperate from the decaf which is nice for anyone who may not be able to have caffeine.

The best thing about the store though? They don’t commit any of my tea place sins. They have smelling jars for every tea on the wall by the tea (rather than kept behind the counter making their workers the gatekeepers of the tea), the tea is prepackaged in sealed, dark containers (rather than requiring workers to measure each bag), prices clearly marked too! They also have teas available in both loose and bagged form making this totally accessible to someone who may be new to good tea and a little aprehensive about going loose (that sounds wrong for some reason). Fairly good selection of teaware too although not as extensive as say, Todd and Hollands.

The staff is friendly and knowledgeable and their to-go tea is reasonably priced.

I’m guessing they don’t normally have cupcakes and cheese though so that’ll make subsequent visits a little sad, but I’ll get over it.

Prices are pretty good too!

This tea shop is simply amazing!

The selection is wonderful (more than 200 teas), and you can try any of the teas they sell here FOR FREE. You can brew your own cup of tea, or have one of the employees brew you a taste.

Everyone who works here really knows their stuff. On several occasions they have made wonderful recommendations to me.

There is a point system in place here too. For every dollar you spend in the store (on on the Adagio website) you get one point. When you reach 100 points you get $10.00 gift card.

I truly can’t say enough good stuff about this place! Give it a try and I’m sure you will love it too.

. Luxuries by Jennie Lynn Tea Cafe
no ratings yet
0 ratings