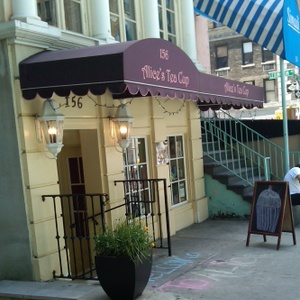 I should preface by saying that since I have about 5 years experience doing English style teas for groups of 2-20 I have become very picky about my high/cream/English teas. So know that my review may be much more judgmental than others. :)

Overall, this place was okay. The tea I had was very good, well steeped and the leaves were not left in the pot (yay!). And they do have an extensive tea menu. The teas they sell loose (quite a lot of them) are reasonably priced, though the menus are outdated – they do not offer 1 ounce sizes, only 2.

The room itself (the downstairs room) was sticky and close. It was a very humid day, raining off and on. It was a moist lunch.

The meal (Mad Hatter) was okay. The sandwiches I chose were egg salad (very, very bland) and lapsang chicken (pretty good). There were 3 fingers of each which was a whole lot of food for just me, but I wanted to try more than one sandwich and more than one dessert. :) The lemon tart I chose for dessert in addition to cookies (guessing store bought cookies) was really, really tasty with a great crust. The scones were just okay. The blackberry lemon sounded like it would be great but it was actually fairly tasteless. The cream is not clotted or devonshire but the sweetened whipped cream served on top of the jam. An interesting way to serve both and only use one dish. :) The service was passable until the end where we had to eventually ask for our check as our waiter had not checked in with our table for about 20 minutes. They missed sending my husband’s order to the kitchen and as a result of the delay they did give us 10% off, which was very nice of them.

Apologies here to those who are fans, but I’m going to be a picky Wonderland fan about the decor. It seems like they went halfway to Alice and then quit. The mismatched cups, saucers and pots with chips (some very substantial chips) were mostly a good choice. Carrying it further to included the plates for the tiers would be better. The tables need cloths that don’t match or something else to make them jumbled. Different styles of chairs would be a cute addition. There were little girls waiting for a tea when we left and they sprinkled fairy dust on them, much to their delight. It was a cute thing to do for kids.

When I left I waited for probably 5-7 minutes for the front of house staff to even notice I was there so I could buy tea. They were just chatting amongst themselves and one of them looked directly at me a few times but didn’t bother to tell the girl he was chatting with that I was waiting. It was a little frustrating but it may just be part of that New York thing that I don’t get since I don’t live here and this is my first ever visit.

It’s worth going, but get the small tier Nibble service and just add a dessert other than the cookies, especially if you are on your own. They aren’t kidding when they say “if you are hungry!” And do make reservations. If we hadn’t had them, we would not have waited the 45 minutes it was taking for others to get in.

And you are right around the corner from Kusmi and I understand there is a David’s close by as well. :)

I was surprised at some of the reviews here on Steepster about the waitstaff being unfriendly. I have never felt uncomfortable at Alice’s Tea Cup. I’ve been there many times by myself and with friends. Sometimes the waitstaff does seem a little rushed when they are busy, but I have never felt like they are trying to move me on. It’s true that they don’t fill the cups to the brim, but that just allows room for adding cream.

The tea variety is excellent and they do steep each type of tea for a specific amount of time according to variety. The food is just scrumptious. They are known for their scones and I look forward to the seasonal varieties they have. They always serve them with clotted cream and strawberry jam. The other food tends to be savory. They have excellent sandwiches and salads. I love their Bangers and (Un)Mashed potatoes!

Often when I go with my sister, we will share a Mad Hatter Platter. Each person gets their own pot of tea (of their choice). You then get to share 3 scones, two types of finger sandwiches, either a chocolate mousse or piece of cake, and a variety of cookies. It’s always a challenge for us to try to finish all the goodies!

After shopping at Kusmi I headed down to Alice’s for lunch. The reviews on Steepster left me a little wary but friends on Facebook had recommended I visit it next time I was in town.

I did need to look around a bit to find it as it was around the corner and the entrance was set down below the sidewalk.

Once I found it I headed in and asked for a table for one. The hostess was pleasant and happy. I did feel a little guilty coming in at peak time alone.

I was seated on the level below sidewalk next to the kitchen; there was definitely a second floor that plates were being brought up to.

The restaurant was skinny and long. The décor was mismatched china and framed prints of pictures of various Alice films, and artist pictures and painting inspired by the same.

There were little notes around (think eat me and drink me) like on the dessert case (come closer, come closer).

They did pull off the wonderland tea party, grandmomther’s parlor theme well.

The tables were wooden with wooden chairs; the table I was on was actually an old converted sewing desk with footpedal.

The staff seemed to have droopy too large and mismatched attire as a uniform (which makes sense) that added to the theme.

The tea menu was very large and descriptive – and sorted by type. I wished I were not alone and could order more than one tea to share and try with someone. The food selection was also diverse and tea themed (scones and such).

The wait staff didn’t seem happy with me; I guess I was taking up space at a four person table for only one person. I felt a little bad but wished they didn’t seem so grumpy about it.

I ordered Alice’s Tea (house blend and apparently a favorite).
The tea I received in a whole, not small, teapot with an interesting drip catcher sponge attached. It was served abruptly with my cup only half poured and sloshed about. Was this thematic to the mad hatter’s tea party or just an angry waitress that she got the one patron table?

The tea itself was a translucent orange brown color. There was not a strong aroma to the brewed tea. The tea was slightly astringent, so I added sugar to the first cup, but as I kept refilling it I didn’t bother as it was so slight. The tea was a smooth, medium bodied black with citrus notes. I couldn’t taste the green tea they blended into the black. It was a little floral.

For lunch I ordered the cumin carrot sandwich. It was delicious and filling and presented well.

I tried not to be a burden and to eat and drink in a not dawdling way, but I could not resist the cookie plate at the end.

If you love scones, this is the place! The pumpkin scones were the best I’ve ever had. I had a pot of the Phoenix Dessert Blend tea with them, and it was so delicious that I had to take a few ounces of tea home with me :) I also had the steak salad and it was great.

Beware: It’s very cutesy and if fairy wings, Alice in Wonderland murals, and mismatched china are not your thing, you might not feel comfortable. Also, best to go on an “off” time to avoid lots of children if you are looking for peaceful tea sipping (I went around 5 on a sunday – perfect!)!

I’m going to be returning to this place for a second look.
I asked my server, after I ordered the all you can eat jaberwocky feast thingy, for a second pot of tea so I could try a different kind… and he actually said no…
Really? A tea place giving you any food item you want and only one pot of tea? That along with the tea I ordered not being all that great makes me come to the conclusion that this place puts more emphasis on their food than their tea.
And don’t get me wrong… their scones in particular are absolutely amazing… but not trying to follow the food with an equally impressive tea sampling hurt my little tea loving soul.
So… if a second server pulls this same thing with me I’m gonna be pissed and I’ll be talking to a manager.
I’ll report back soon!

. Kai Japanese Restaurant and the Ito En Tea Store
no ratings yet
0 ratings