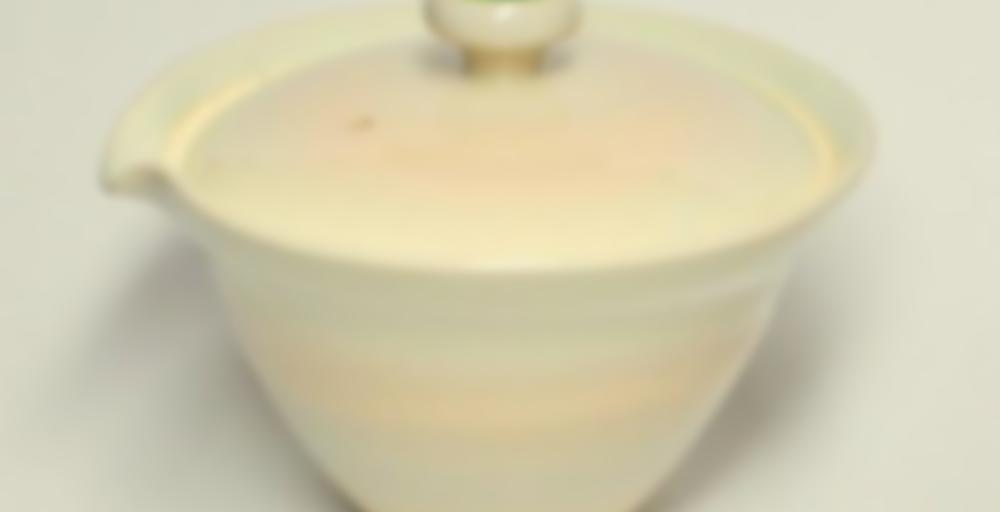 Shiboridashi teapot is like a houhin (literally, “treasure cup”, a small kyusu tea pot without a handle used for brewing gyokuro or high-quality sencha).

This particular shiboridashi teapot made by Shigaraki-yaki potter Sawa Houzan is very unique for not having a strainer, unlike most kyusu (teapot) found in Japan. Instead, the slits near the spout function as a strainer, keeping the brewed tea leaves in the pot and pouring out only the liquid.

All the details are handmade, a work that is made possible only by Sawa-san’s expert craftsmanship. Enjoy the simple and elegant ware that will offer you a new experience of tea brewing.

Teaware has come to play an important role in my tea drinking experience. With all of the tea ware I’ve amassed so far, I figured it’s high time I reviewed some on Steepster so here goes.

I had coveted this Sawa Houzan Shiboridashi ever since it began popping up on Instagram. It looked so elegant with its graceful shape, webwork of crackles, gemstone-like knob, and unique “rake” filter. Online reviews convinced me to get it and I finally picked one up during a sale at Yunomi. Having owned this for well over a year and half now, I have quite a few thoughts to share about its positives as well as its downsides.

When I first received it, I was disappointed that it looked different from what was pictured online. In pictures, its cream colored with faint pink streaks. However the one I received was all cream which looked rather plain and not as exquisite. I ended up keeping it though since it would have been too costly to ship it back to Japan. Another feature not as advertised was the capacity. It’s supposed to be 150ml but mine is closer to 120ml which actually works out better for me. The interior is glazed allowing you to brew any kind of tea in it. This teapot is designed for steeping Japanese green tea, but ironically I’ve found Japanese greens to be the worst suited tea for this vessel. The fine leaves clog the filter creating a huge mess and leading to longer steeping time and bitterness. And it’s a chore to scrape the small tea leaves off the lid, filter, and walls of the teapot. It’s the same story whether you use a full leaf tea like gyokuro or a fine sencha. But all is not lost because it works fabulously with Chinese greens, blacks, and oolongs. There are 20 or so fine grooves near the spout that effectively catch the leaves and minimize the amount of sediment in the cup. No need for an external filter when using this teapot. The pour is a little longer than a gaiwan though so it may not be ideal for puerh or other flash steeped teas. I find that Chinese greens and kamairicha taste better in my shibo than gaiwan which I attribute in part to the better heat retention from its thicker walls. In fact it’s my preferred teapot for steeping all greens but sencha which still works best in a kyusu.

Nice post. I’m all about tea ware that functions well. I’m also a fan of shibos. I purchased a cream-colored glazed one from a local artist on Etsy, so it’s less refined looking, but very light weight with a good rake filter that catches most leave particles and very comfortable to brew with. I’ve also found it works better with larger-leafed Chinese teas than smaller-leafed teas like sencha, but I’ve brewed light-steamed gyokuro with it and it was fine.

I like the rustic look of handmade teaware on Etsy. The Mogake clamshell shibos with the burnt seaweed design are really beautiful too but I haven’t been able to justify the price considering they are unglazed and have to be dedicated to a single tea.

I agree – there seems to be an awful lot of unglazed shibos over $50. I would only consider an unglazed one from Hojotea if they were closer to that price, but alas they’re well over $100. I suspect he’s identified a niche market in Asia comprised of successful business folks.

I had admired this shiboridashi for awhile but it was pricey and I wondered if it would really work like I wanted it to? Then I read TeaNecromancer’s review and thought “I HAVE to buy this!” but it was still pricey so I thought I would wait for sale. The next day I got an email from Yunomi that they were having a 35% off sale when you purchased $50.00 and over. So I bought it right then.

Now I’ve bought a Japanese teapot in the past and it didn’t meet all my requirements for what is a perfect vessel to brew my Japanese tea in.

1) It needs lots of room to allow the leaves to expand so an infusier that pulls out is not a good option.
2) It needs to have a capacity for one person only. I rarely have Japanese teas with someone else.
3) It has to pour quickly and allow the water through easily when the leaves expand. Every second it pours slowly bitterness creeps in.
4) It must be easy to clean.
5) When the tea pours, it must pour out clean without any leaf. Most of the others I used, I had to pour with an extra filter.
6) It must be pleasing to eye.

Well this shiboridashi meets all those requirements and more. Especially in the last one (6). It is cute, easy to handle when pouring. Love the little red knob . Love the crackels. And here’s an extra bonus: When I poured the water in to do the first infusion, I noticed part of it turned a blush pink inside. I also noticed a bit pink on the lid when I was brewing the tea. I wonder if that is only the ones with a red knob on them?

I never had any problems cleaning this up like TeaNecromancer but I was brewing a sencha which has bigger leaves. I haven’t tried this yet with some of the finer leaf teas but it performed beautifully with my sencha. I can see this will easily become my favourite teapot for brewing Japanese greens.

I am currently embroiled in a very heated competition, a cheesecake bake off! Granted I am really the only one counting it as a competition, my judges and competitor are all like ‘we all win’ and that is fair, but not as fun. Granted the reason I am so competitive with this particular culinary competition is the recipe is both very expensive and a real pain to make without a mixer. Spoon Fork Bacon’s Goat Cheese and Greek Yogurt Cheesecake is one of my favorite recipes ever and I seriously suggest giving it a try, just know that if you make without any form of electric mixer you are in for an arm workout!

It is a Wednesday, meaning Instagram is all a buzz with the #teawarewednesday hashtag, and for all my massive hoard of teaware I have not played along in a while, so today is celebrating the beauty of teaware! Specifically Yunomi’s Sawa Houzan: Shigaraki-yaki Shiboridashi, one of my greatest treasures. For Tanabata Yunomi had a mini contest, you wrote a wish on their website and a randomly picked winner would get a gift certificate, reminiscent of the tradition of writing wishes on strips of paper. I wished for a real Japanese Shiboridashi, made for the enjoyment of green tea, to heighten my enjoyment, and when my wish was randomly picked I immediately picked the shiboridashi that has been on my wishlist for literal years.

I love my other two shiboridashi, but they were not quite perfect for the finer grade of Japanese green tea, letting the tiny leaves slip through the grooves which were just a bit too big, causing me a bit of frustration and often a mouthful of leaves. I had debated getting a clamshell style clay one at one point, but really kept coming back to this specific shiboridashi, its coloring and graceful lines called to me. The cream and subtle salmon pinks remind me of snow reflecting the colors of sunset, and the shape reminded me of a calla lily. One of the more intriguing things about the design I gleamed from the photos was the crackling, I so love teaware that tells the store of use through the deepening dark crackles achieved over time.

It was in for a massive surprise though! This shibo crackled after its first use! A fine spiderweb of dark lines started to appear after my first session with a green tea, each session since adding deeper lines and at this point it is almost entirely covered in a webwork. This patterning matches the cracked glass decoration on the knob perfectly. Really everything about the aesthetics of this piece is perfection.

No matter how beautiful a piece of teaware is, it still needs to function or it is pointless, and no one wants that. Luckily this piece was crafted by a master potter so of course it functions beautifully! The pour is fast and even, no weird drips or messes when I am pouring. The grooves keep the majority of the leaves inside the shibo, a tiny crumb might escape but really it is immensely effective. It keeps the temperature of the leaves and water steeping even but does not hold heat too terribly well, this is great when I am drinking those delicate Japanese greens but on the few occasions I have used the shibo for other teas the tea was a little bit watery from heat loss. Honestly though complaining about that is like complaining when the screwdriver is really bad at hammering in nails, wrong tool for the job.

Since it wouldn’t be a teaware review by me if I didn’t find one thing to nitpick, this beautiful perfect treasure is a pain to clean. Specifically those grooves are a pain to clean, I feel like I need to get a specific scrub brush just to get the bits of leaves out from between them. And yes, it is somewhat hard to photograph, the bright color and crackles cause some havoc for my camera, but that is more a failing as a photographer than a failure in the teaware, it makes me sad though since it is so pretty and I want to show off how pretty it is!!

for blog and photos: http://ramblingbutterflythoughts.blogspot.com/2016/10/yunomi-sawa-houzan-shigaraki-yaki.html

I’ve been admiring that one for awhile and nice to hear it’s so functional.

They are having a sale right now – 35% off so I bought one after all!

Oh awesome! What color knob glass did you get?

I went with the red.