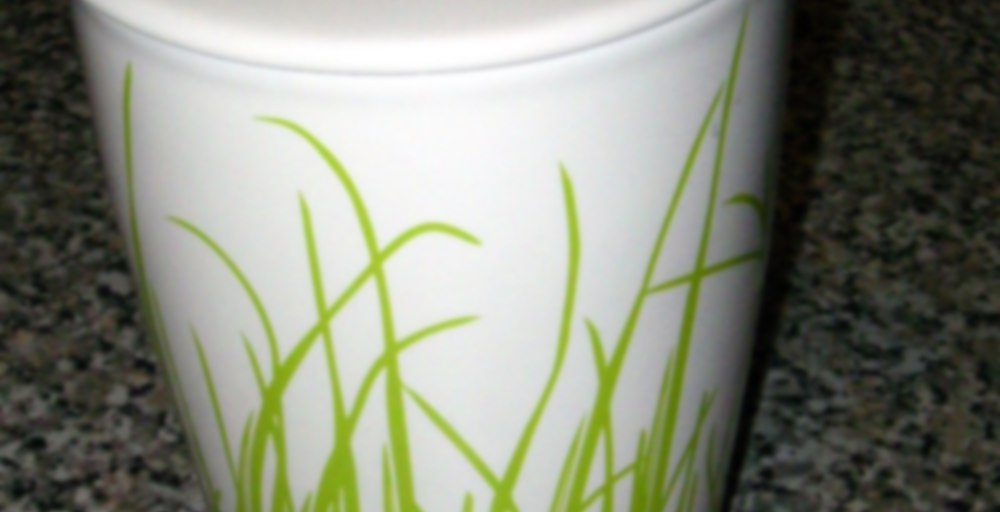 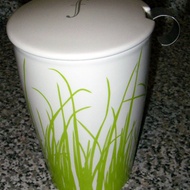 Loose tea by the cup…..simple.

Like Azzrian, I got a few of these when Tea Forte had a FREE Kati cup with the purchase of a tin of tea. One will probably be a gift, this one is actually for my daughter (it is the one with the tree on it and a white background). I have a ForLife Curve Tall Tea Mug with a strainer, too. So really this is kind of a comparison of the two. I also ordered the orange Kati with the white flowers. The orange is a muted version of an orange crayola. I was hoping it would be a brighter orange, but it is still cute.

Volume on this is 12 oz. and it is supposed to be double walled. The ForLife is 15 oz. and is not double walled, but it has a handle. One thing that I don’t like about the Kati, it still gets pretty hot. I felt like I had to wait to drink my tea. I don’t think this will be much of an issue for my daughter because she will know when she can drink it if the cup is not too hot.

As far as looks, the ForLife one is pretty boring. It just comes in single colors. The Kati had some cute prints. For my daughter, having some kind of print on the cup is a bonus as she really enjoys decorated things.

For function, the ForLife wins hands down. But the Kati is so pretty!

I think I may also pick up a cup from David’s Tea so I can have a print, too! The ones at David’s look very similar to the ForLife, but not quite exact.

We have six of the DavidsTea ones, not counting the one that broke because I am an idiot. We love them. Seriously, we have enough mugs in this house to keep a small country well hydrated, but when we run out of perfect mugs, there’s always a moment of “Oh crap, we’re out of mugs….no, wait.” XD. I cannot recommend them enough and I think they’re well worth the price.

I’ve had a Kati cup for quite a long time now, and it’s my primary brewing method at work. The handle broke off my strainer a while back, and for a while I just pried it out of the cup with an implement. Finally I bought a ForLife infusion basket that also fits in the cup and I’m very pleased with it. I definitely understand prefering the ForLife baskets.

As far as the heat issue goes, in the end it works for me because I don’t like to drink my tea super hot so if I can pick it up, I can drink it. No more burning my mouth on too-hot tea!

These do look so pretty – I do want one! (of course)
I just got a Finum yesterday though and I love it…

I love my finum too.

I got two of these (placed two separate orders) when they were offered FREE with purchase of one loose leaf tea canister! I got the bird song one with cucumber mint and a tree one with blueberry merlot. I am so happy to have them. I will probably gift one or keep the extra around for when my daughter or husband desires to share in some tea with me which is happening more often these days! Yay!
I really love the bird song one and glad I grabbed it up since it seems to have been the most popular choice when they offered this special!
Pros and Cons: Love the lid to keep steam in while steeping. Perfectly fitting mesh strainer and lid fits perfectly on top. Strainer is not as fine of mesh as it could be so some tiny particles get through leaving grainy texture at bottom of cup but it will be excellent with larger leaf teas! Double walled keeps tea warm long enough but not THAT long, and is too hot to hold when water is first poured. Although most people like to let tea cool for a minute or two before drinking so this should not be an issue for most.
Seems durable but too soon to tell.
Wonderful design – very pretty!
Would I BUY one? Yes if I had the extra money sure I like the convenience of being able to just pour the boiling water over the strainer, cover, and steep, not having to get back up to go to the tea kettle! I also like not having to clean the tea kettle after a steep! However knowing me, “extra” money would go to tea instead. I am really happy I was able to splurge and get these while they were free with tea purchase!!

I ordered myself one of these after using my mother’s a couple times and really enjoying it. Annoyingly, even though I ordered a design with birds and magnolias, the cup I received was plain white. I wrote to Amazon to complain, and they did nothing, then wrote to Tea Forte and they sent me a replacement and said to keep the first cup. So, these are my current favorites to use, and I really enjoy having two to switch around and use during the day without having to constantly wash.

The cups keep tea nice and hot while it steeps, and the lids also help a lot. The strainer is fairly effective, and better than many I’ve tried at keeping small particles out of the liquor.

I have a similar set, only in a clear glass mug. The lid makes such a difference.

I liked my first Kati system thing….whatever it is….so much that I decided to buy another. See, the first one was supposed to live at work, but I liked it too much so I ended up carrying it back and forth every day. Anyway, I ordered the “poppy fields” one this time (the one with the red and orange flowers). I thought the background was going to be purple, but it was brown. A tiny bit of a bummer, but nbd. Unfortunately, it also arrived with a chip in the rim. I was extremely (pleasantly) surprised when I called customer service and they sent another one to me right away, no questions asked. I didn’t even have to send the damaged one back. Huge props to Tea Forte for that!

That is great customer service! I have looked at some of their mugs, but looked at Davids Perfect Mugs too.. not sure what I want next. The poppy fields one was one that I had my eye on, red is a favorite color of mine :)

I didn’t realize the background was brown. Don’t they have one with a white background? Oh, maybe that was cherry blossoms.

I’ve been admiring Kati cups for awhile. They are so beautiful, & it’s awesome to hear that they have excellent customer service!

I’ve been looking at this as well, but I worry the little infuser basket is too small. It seems small in the pictures I’ve seen, anyway. How’s the actual size?

Yep, Suziqzer, the cherry blossoms one has a white background.

Cheri, the inner diameter of the basket is about 7cm or 2.75in and the depth at the center point (it’s rounded) is about 3.5cm or 1.38in. The measurements are approximate but should give you an idea of how big it is. If you’re worried that the infuser wouldn’t reach deep enough into the mug, there’s an inner rim aprroximately 1cm down from the top of the mug where the infuser basket sits.

I bought this cup for work and love it so much that I had to buy another one for at home!

The only gripe I have about this system is that the strainer doesn’t stay level in the cup. Yes, I know this is a minor gripe, but sometimes I’m a little bit compulsive, and you would think that a strainer/cup/lid designed for each other could fit together PERFECTLY. I also like to fill the cup up as high as possible. Since the strainer isn’t level, I often fill the cup just a hair too high for the low end of the strainer and get a few leaves floating over into my tea. Besides this minor MINOR complaint, I love it!