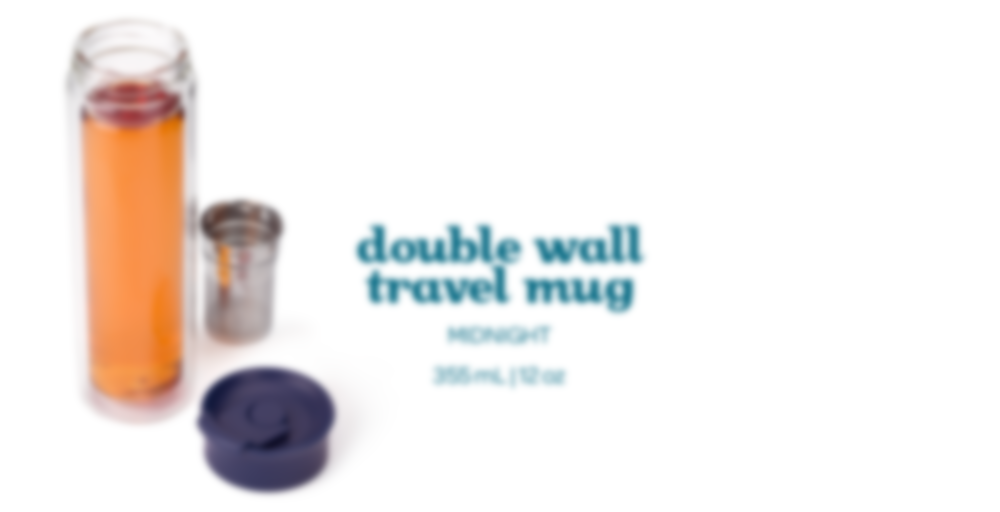 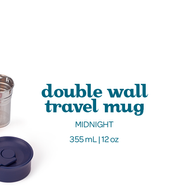 CLEAR GENIUS
We can’t deny it – we’re totally smitten with this travel mug’s sleek, slim silhouette. And the heat resistant, double-paned borosilicate glass keeps your tea as hot or cold as you like, while staying comfortable to the touch. Add a removable stainless strainer to the mix, and this might just be the perfect on-the-go mug. The best part? Watching your tea steep. Enjoy the show! (354ml/12oz)

Hand wash only. Not microwave safe.
Avoid extreme changes in temperature.
To avoid overspill, fill water to a max of 1cm below lid.
Screw lid tight before drinking.
Keep out of reach of children when filled with hot water.

Today my David’s order showed up! I was so excited to use this mug that I sipped way too hot tea from it and burnt my tongue and the bottom of my mouth under my tongue! Easy there, girl! I was so ready to love this thing. Upon inspection I realized that the tea basket has a perforated lid and wasn’t an open basket like I thought from viewing it online. That excitement faded when I realized how difficult it was to get lined up correctly to screw the two halves together. It’s kind of a PITA. There is also a really sharp point where it looks like they laser welded the perforated sides onto the solid part with the threads. It is like they didn’t file two of the welds smooth and now I have to do it or risk slicing my finger trying to screw it shut.

The lid, which is the only plastic part on the mug, is the biggest let down. The lever part of the lid when swung back in the open position is in a really weird spot for trying to sip. I knock my nose on it every time I put the mug up to my lips, reminiscent of awkward teenage years when you bump noses with the other person trying to kiss. So not sexy! I have seen designs where the lid had a cut out so the lever part had a recessed place to live and lay flush with the rest of the lid when open or designs where the hinge was on the opposite edge of the lid from the mouth opening, letting it swing over and lay on the side of the mug. Another part I hate about this lid? The opening for the tea to come out is ridiculously small. It’s 1/2″ × 1/4". (No idea in mm, sorry northern friends!) I was driving and trying to drink from it and had to hold it up (while bonking my nose) for way to long to get a descent amount of tea in my mouth. The small opening also makes it a little more difficult for me to gauge the temp of the tea. I’m used to openings that are large enough for me to blow into, allowing me to gauge the temp by the heat from steam that blows back up. Another annoying thing about the lid? The designers were thoughtful in the fact that they put one of those little holes to keep air pressure from preventing tea from pouring out, but they put it just slightly above the opening, so unless you hold it at JUST the right angle, the tea covers both holes and you get the pressure build up anyways. I can hold it at a 45 degree angle with the lid down, the lever open and after a few spurts of fluid coming out, the flow stops completely. Who designed this?! A six year old?! I haven’t been to any design school, but I’m pretty sure I could make a lid that works 10x better than this one.

The last thing that I find disappointing about this mug is that the first version they came out with had a solid David’s teal silicone sleeve and the latest version does not. It’s a mug made for tea on the go, you are going to be all over town with it, it’s double walled glass… why was the decision made to take away a feature that would make this a little more durable and would likely help extend the life of the mug?

Edit: Just added some photos to illustrate my points.