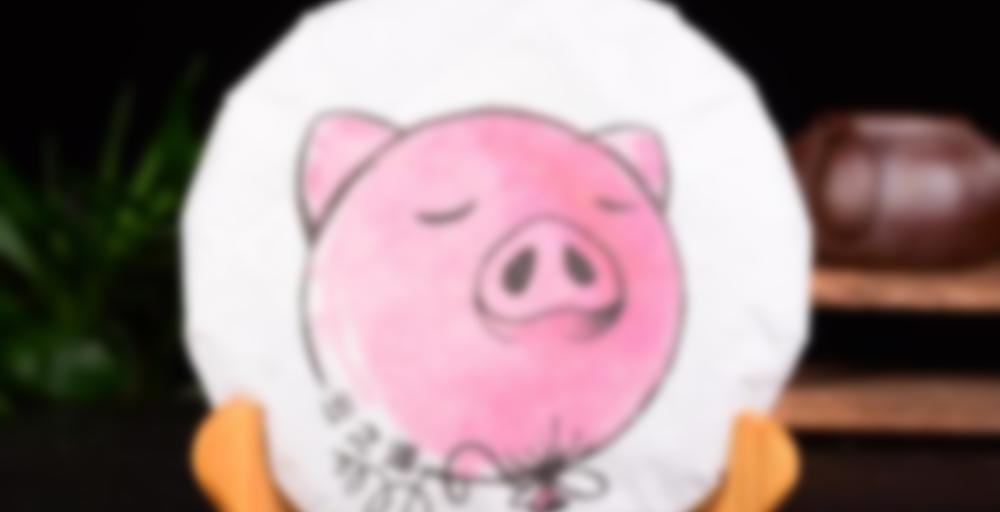 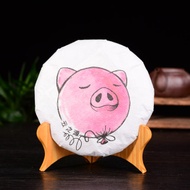 The blend is heavy on the ripe with just enough raw to give it that extra dizzying kick! Very nicely balanced tea with pleasant cha qi, long-lasting mouth-feel and plenty of thick and sweet ripe goodness! Further aging will bring these teas closer together resulting in a wonderfully harmonious and unique experience!

As a big fan of the 2016 Wild Purple Green Mark, Dizzy as another raw–ripe blend became a tea that I definitely wanted to try. I received my sample of it around a year ago and had a couple of sessions with it. I remember liking it and still have my tasting notes from one of the sessions jotted down on my phone, but I never got around to writing an actual review for it at the time. Today I dug up the last of my sample from the depths of my pumidor and here we are finally properly reviewing this bad boy.

After a brief rinse, Dizzy opens up quite earthy and surprisingly sweet. Perhaps a bit caramely or nutty. I’m reminded a lot of roasted wulongs, which is quite interesting. The mouthfeel is also surprisingly enjoyable for the first brew. The cha qi which I remember from the previous session is also kicking in already from the first steep. A very enjoyable opening.

The second brew presents a very multilayered flavor profile. We are still in the sweet, roasted, earthy spectrum, but the texture has picked up a little and become slightly sticky and coating. I also notice some active sensation in my mouth. Cha qi’s even more noticeable than before, but thankfully it’s a good type of qi. Very positive and vitalizing.

The third steep presents a big turning point for this tea. I’m greeted by an almost shockingly fresh and fruity taste. Very zesty, citrusy I’d say. I can’t overemphasize how fruity this tea is. The body has also thickened up and the soup actually feels heavy to swallow. The cha qi is possibly at its most potent, very heady. I wouldn’t consider this a casual brew. The aftertaste is strong. To me this is a quite superb tea.

Immediately after I say that, we head into steep four and experience a bit of a dip as the tea heads in a more sour direction, which I personally aren’t a big fan of, although sour teas have their fans out there. I’m getting a bit of a cola vide in the finish and as I keep drinking this steep I do actually end up liking it. The mouthfeel remains great and the tea very flavorful. For a tea with ripe mixed in, the freshness is quite uncanny. There’s a lot going on here and you aren’t getting just one singular taste. Dizzy is a very dynamic tea to session.

Infusion five is even thicker, even zestier. SO fruity. I get such good vibes from this tea. It’s so clean, so fresh. I’m getting a touch of cooling now. The flavor has shifted from citrus to white grapes together with the slightly earthy touch from their skin.

Unfortunately from infusion six onward the tea starts tapering off, big time. I remember having issued with longevity in the past and I really recommend beginning to push the tea hard once you notice it gets to this point. Steep six is pretty much a combination of a standard shu affair and a run-of-the-mill sheng in its twilight. Infusion seven is similar but has more of the fruity, zesty character. Both brews are still good, though. Very flavorful and enjoyable. But there’s a distinct “thinness” to the flavor – a lack of depth. And that ultimately makes these steeps lacking in satisfactions, at least for a person like me.

Steeps eight and nine are the last two, but fortunately present yet another chapter in the journey of Dizzy before we close the book. Both present an unexpected medicinal character, distantly similar to what I experience with Wild Purple Green Mark. In infusion eight I get a nice minty, camphory taste. We’ve also returned back to the sweet citrus. The closing brew on the other hand leans more toward licorice. I’m happy to say these last two brews elevated my opinion of this tea back up again.

So yes, I highly enjoyed Dizzy. I remember it being good a year ago, but even just a single year in storage has done wonders to this concoction. The experience is really unique and I recommend a sample to anyone who’s even a bit adventurous. If you’ve already tried raw–ripe blends in the past and didn’t like them or just find the idea of such teas sacrilege, then perhaps this is not the tea for you, but otherwise I highly, highly recommend picking up a sample next time you are putting together a Yunnan Sourcing order.

While I highly enjoy (the now sold-out) Wild Purple Green Mark, which I own a cake of, I think Dizzy easily surpasses it in my book. I don’t think the two teas used in WPGM by themselves are anything special. It’s really the combination of them together and the unique flavor profile that results that makes that tea better than the sum of its parts. Dizzy on the other hand shines in other areas besides just taste, which is key for me. And on top of that the flavor profile that is born is even more unique than what we get in WPGM. Granted, it is most similar to some roasted Taiwanese wulongs I’ve had, but at the fraction of the price and on top of that you get the body and cha qi which you often miss out on in many wulongs.

The only shortcoming is the longevity, which ultimately isn’t that poor all things considered, just a tad disappointing. It reflects the affordable price of this tea, which I would consider amazing value. I’m most definitely going to be grabbing a cake of this.

One final note, though. I would say the sheng is easily the main star here. If you are more of a shu drinker, this might not be the tea you are looking for. This baby might brew up dark, but the flavor as stated is very fresh and zesty after the first few steeps. And similarly if you are mainly a sheng drinker, don’t be put off by the inclusion of shu in here. The earthy, fermented spectrum really plays more of a supporting role here.