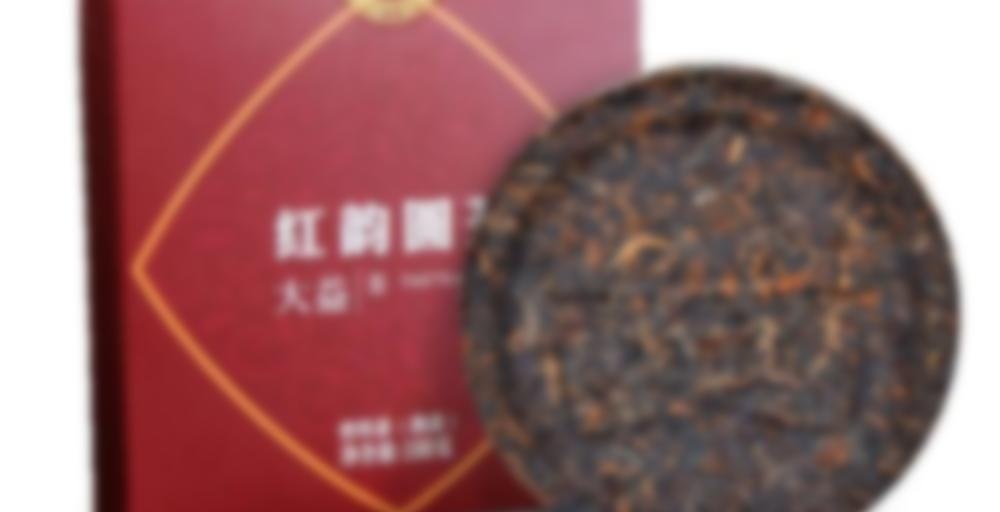 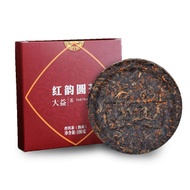 This lovely little mini cake is called “Red Rhyme” (Hong Yun 红韵), and is the one of the highest grade premium ripe teas released by Menghai tea factory for the year 2018! This special blend was first released in 2008 and has been a big hit with ripe pu-erh aficionados ever since! Menghai tea factory is the foremost tea factory in Yunnan with more than 50 years of history. Their quality of their ripe pu-erhs have made them the undisputed King of Ripe Pu-erh! This collectable mini tea cake is composed of grade 3 and higher leaves, all smaller leaf fermented material with plenty of flavor to give up when brewed! When brewing keep infusion times very short in the beginning! Sure to be a classic due to its amazing textured flavor profile and limited production quantity.

Menghai Tea Factory （勐海茶叶厂）: Menghai Tea Factory was formally established in 1940 by a group of over 90 tea professionals with origins from all over China. It is possibly the oldest specialized tea factory in Yunnan Province. Because of this, it has a solid reputation that is well respected by Pu-erh tea enthusiasts. It is located in Menghai county of Xishuangbanna (西双版纳) prefecture, which is renowned for being one of the birthplaces of Chinese tea culture. They were one of the first two tea factories (along with the Kunming Tea Factory) to come up with the ‘wodui’ (渥堆) method of ripening pu’er tea in 1973, and have a series of recipes that are undisputed as some of the finest ripened Pu-erh teas available. Formerly under the umbrella of the state-run CNNP, they went fully private in 1996 and adopted the ‘dayi’ (大益) logo. ‘Dayi’ means ‘great benefit’, which is meant to point out the great benefit that tea has on the body, the spirit, and human relationships.

It is part of the five pounds of pu-erh that I ordered to get me through the virus-forced extended working-from-home period.

The reviews by HaChaChaCha and Rich are on point:

- a clean, powerful taste without any funk or bitterness
- thick and viscous, with a strong cha qi
- main flavors are wood and chocolate, with some undertones of barnyard and berries
- not responsive to differences in the brewing time
- not a lot of complexity.

Now, it is well-packed, but not excessively: it could be broken with a knife fairly easy and without dust. This is a no-fuss shou with punch and character that could be enjoyed on a budget. Good stuff.

Love how they press the factory symbol in these things as well.

I took a break from my aged raw puerh marathon to give this tea a try. It sounded interesting when I read about it on Yunnan Sourcing, and I ordered three 100 gr cakes. One for testing and the other two for additional aging, though having now tasted the first cake, I’m not entirely sure additional aging will change or improve the tea. The “cake” is highly compressed. It’s in the shape of a cake, but it isn’t actually a cake. The compression is more like what we think of with tightly compressed bricks. The true shape is a puck. If you try the tea and don’t like it, you can always use it as a coaster under your sofa’s feet As you might expect, the first couple of rinses/infusions don’t yield much with this high of compression, but after it gets going, it brews up very dark even with fast infusions. Giving a rinse and letting it sit with the lid on after draining the pot helps immensely.

If I were blind tasting this, I would guess that it is a ripe. It has some of that flavor, but it also shares some similarities to a well-aged raw and it packs a punch in the caffeine department. Its lack of strong earthiness, barnyard, leaf pile taste make it taste different from many ripes. It’s very clean. There is some front of the mouth sweetness and it feels thick and viscous in the mouth. I don’t get any bitterness when drinking the tea, but the aftertaste has some bitterness. I tried pushing the tea early on to over a minute with boiling water, and it doesn’t change that much, so brewing parameters are not that much of a factor. There is a little back of throat feel for me after I have stopped drinking. There is very little fragrance to the tea soup or the wet leaves. I get a little dark chocolate scent from the wet leaves, but even that is light. The tea packs a punch like a can of Red Bull. Just a few 40 ml cups into the session, and I could feel the tea’s effect.

I’m on the fence on whether I would recommend it or not. It’s extremely clean, but it’s also (for me) one-dimensional. If one were wanting to try ripe puerh for the first time, it’s not a typical ripe, so I don’t think it would be the best introduction. If one had never had an aged raw, it could give a hint of that, but it’s not quite like the real thing, so is almost there good enough? If someone likes a smooth, thick, creamy, somewhat bland ripe, this might make a good daily for them. It could be that my aged raw marathon is influencing my review of this.

This in an excellent Dayi ripe from 2018. Pressed into a rock hard disk, this mini cake packs a punch. It has great body and a thick mouthfeel. The flavor is smooth, with hints of chocolate and a hint of berry here and there. High caffeine. An all around great tea.