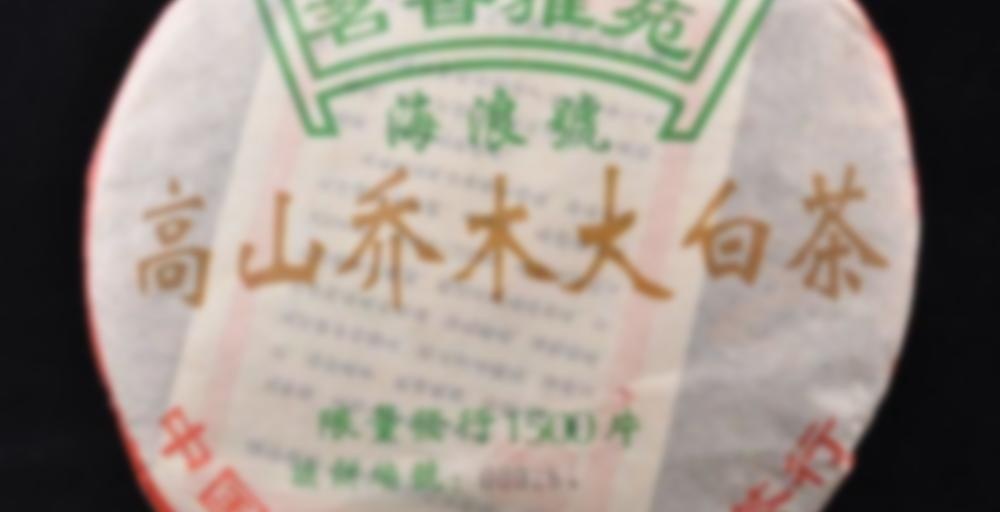 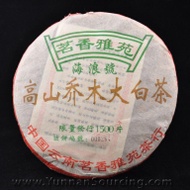 Composed of Jing Gu Large White Pekoe varietal from Yang Ta village in Simao. An ancient arbor tea from early spring 2005, featuring prominent thick and stout tea leaves with fat hairy buds. The tea has been dry-aged in Hai Lang’s Kunming warehouse. Compression is medium to tight, but due to several years of aging it has loosened the cake a bit and it’s easy to pry leaves off the cake without too much breakage. The brewed tea smells of grass and flowers with underlying thick sweetness. The first few infusions gradually open the leaves each infusion more complex than the previous. The tea has tastes of sugarcane and some orchid aroma. The tea can be infused upwards of ten infusions and with each infusion there is a refreshing new dimension revealed. A subtle but extremely memorable and enjoyable tea. By all means take the time to examine and appreciate the brewed leaves before composting!

Found this tea to be way to smoky to enjoy. I really like this varietal and had high hopes for this tea but I’m pretty sensitive to smoke and tasted it out into the later steeps. Glad I only bought a sample.

Continuing my exploration of dry stored semi-aged teas. My sample consisted of a nice assortment of pieces from the bing along with large, mainly intact loose leaves. The aroma of the dry leaf is quite smoky and the compression quite loose at this point. I used 11g in a 165ml Yixing dahongpao clay teapot. A single rinse for 10s, followed by a rest of five minutes to let the leaves soak up moisture. I did a total of ten infusions, the timing for these 15s, 14s, 16s, 20s, 20s, 28s, 45s, 75s, 2 min. and 3 min.

Da Bai is a very sweet tea from start to finish and the full breadth of its flavors consisting solely of notes light in nature. The sweetness keeps building toward the middle steeps after which it gradually diminishes toward the late infusions. At no point did I notice any bitterness and only the final steeping was perhaps a tad dry in its finish. Contrary to the initial smoky scent, there is actually very little of that in the cup. I got some nice tobacco notes in the first steep to complement the sweetness (pipe tobacco according to my drinking partner) as well as some tar and an increasing level of smokiness in the finish in the second, but after that the smokiness was gone both from the nose as well as the cup. I don’t know if those notes are a product of processing, storage or aging.

For the majority of the brews the sweetness is a honey type of sweetness. Not the underdeveloped honey notes you often see especially in young Jing Mai and Yiwu teas and that I absolutely can’t stand, nor the totally credible honey notes you can find in really good Dian Hong, but something somewhere in between. While I’m not a fan of overly sweet teas, this is again one of those raws where the sweetness is quite pleasing to me. In later steeps a welcome fruitiness began to emerge to accompany the honey sweetness. I’d say I picked up some peach or apricot notes in particular.

Interestingly the flavors in this session centered mainly on the tongue in the first couple steeps. Gradually the flavors and activity moved further toward the back and in the third steep I experienced a genuine huigan radiating from my throat. From that point on a heavy chest feel kept on growing and the tea began showing its potency. By the end of the session my muscles felt totally numb, like under anesthesia. While I stopped at the tenth infusion, the tea could have likely gone on, but I was quite full of tea and the cha qi was actually potent enough as to make me not want to carry on any further that day.

The tea has a longer aftertaste than many younger teas and a body that is above average, albeit there isn’t anything interesting going on in terms of texture. While it produces a brew that is light yet also fairly rich especially if pushed a little, ultimately Da Bai isn’t a very complex or dynamic tea. That being said, it is definitely higher quality than your standard factory productions and the potent cha qi has to be noted as one of the highlights for this session.

All in all this was an interesting tea to session. My main motivation to try it stems from the fact that I purchased Yunnan Sourcing’s own 2014 “Jing Gu” pressing blind two years back. Both teas come from the same village, so I was curious to catch a glimpse into how the tea might age. While the tea was enjoyable, I think 40¢/g is quite steep for what it has to offer. You are paying a lot for the age and I think this tea might belong more in the 15–20¢/g bracket. I believe I paid $62 for my YS cake, which I admittedly have yet to try as I’m thinking of giving it a couple more years first. If the two teas are in any way comparable, that is a very fair price. The price has gone up by nearly 40% since then, which shows you why I prefer buying teas young and aging them myself, especially given that I enjoy drinking young teas.

A nice tea, but at this price you won’t have trouble finding better value.