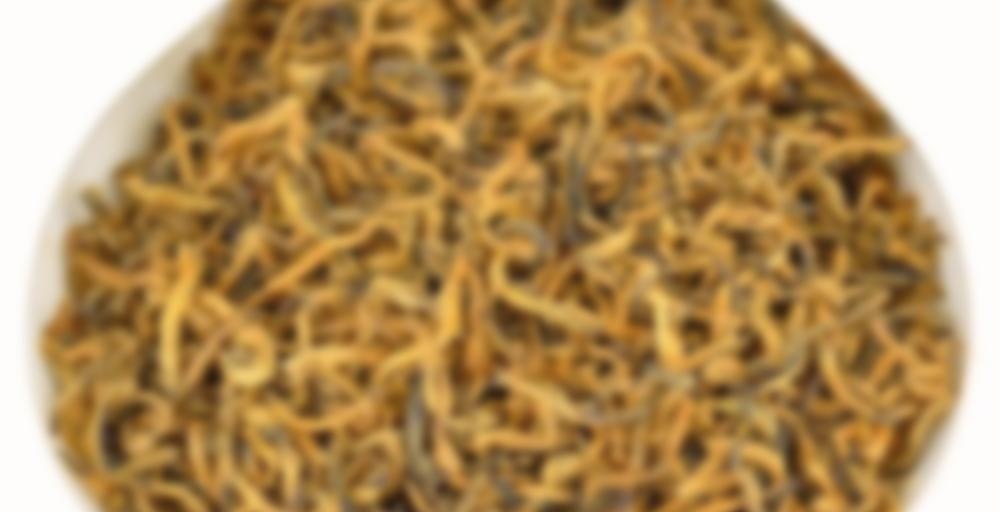 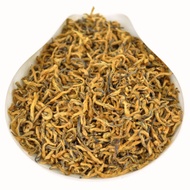 Pure Gold Tips expertly processed to enhance and preserve the hairy fuzz on these tiny little buds. Tong Mu Guan Village near Wu Yi in Fujian is the most famous place in China for the cultivation of Jin Jun Mei and this year’s harvest (April) is among the best in recent memory.

The taste of the tea is malty, with hints of caramelized sugar and smoke. There is a viscous thickness to the tea soup and a sweetness, both of which linger in the mouth and throat after drinking.

SIpdown! last little bit of this is off to VariaTEA to keep her in straight black tea sample hell ;)

This was another of my more recent sipdowns. It was also a tea for which I did not have particularly high expectations. For whatever reason, Jin Jun Mei never really seems to stick with me, and also, the various Jin Jun Mei offered by Yunnan Sourcing tend to strike me as being ridiculously hit or miss. The Pure Gold Jin Jun Mei of Tong Mu Guan Village has never struck me as being bad (usually it is quite good), but it also has never been one of the regular YS teas that excites me either. Fortunately, this 2018 production was good, probably the best of the comparatively few productions I have tried.

Prior to the rinse, the dry tea buds emitted aromas of cedar, malt, smoke, baked bread, molasses, and tobacco. After the rinse, I detected new aromas of roasted almond, roasted peanut, and brown sugar. The first proper infusion brought out aromas of maple syrup, butter, cream, and chocolate. In the mouth, the tea liquor presented me with notes of cedar, malt, baked bread, grass, roasted almond, and brown sugar that were balanced by hints of roasted peanut, cream, butter, smoke, and molasses. The bulk of the subsequent infusions coaxed out aromas of vanilla, marshmallow, brown sugar, honey, leather, sweet cherry, and orange zest. Stronger and more immediately detectable impressions of cream, butter, and roasted peanut appeared in the mouth alongside notes of minerals, earth, honey, pine, orange zest, vanilla, ginger, marshmallow, leather, and chocolate. There were also some hints of nutmeg, maple syrup, red apple, pear, plum, sweet cherry, and tobacco that popped up here and there. As the tea faded, the liquor shifted and emphasized notes of minerals, butter, malt, cedar, cream, chocolate, and honey that were chased by fleeting hints of baked bread, smoke, roasted almond, orange zest, vanilla, ginger, sweet cherry, brown sugar, and maple syrup.

Overall, this was an enjoyable tea with a lot to offer, but if I had one serious complaint, it was that it grew very sweet and rich over the course of every gongfu session I did with it. There were instances in which the tea liquor struck me as being almost cloying. Even though I am not a huge fan of sweeter teas, this one was still enjoyable for me. It’s just that it would have been more enjoyable had the sweetness not been almost overpowering at times. To be clear, this tea was far from bad, but it was not really for me. At least I can say that it was more memorable and enjoyable than some of the other Jin Jun Mei from Yunnan Sourcing have been. I have no doubt that fans of sweeter black teas would love this offering. I could also see it working as a good point of entry into the world of unflavored tea for regular drinkers of flavored teas.

This is a nice tea but I was expecting something memorable.

Perhaps I will find that in a higher grade.