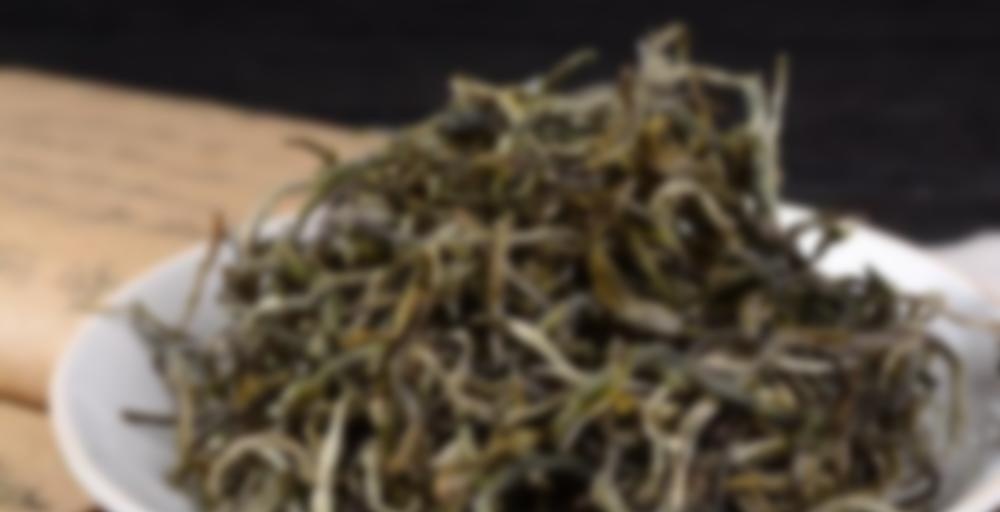 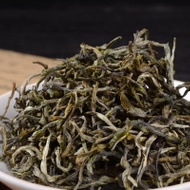 Zhenyuan a high altitude area of Simao produces this high quality delicate green tea. Picked twice a year in a 2 day period when the buds and leafs are young and small. The taste is light and fruity with slight nuttiness. An exquisite tea, fresh for spring season.

Grown by a small family-run operation!

Oh yeah, the backlog is almost clear. I only have one tea left to review after this one. Then I can move on to what I have been drinking for the past two days. I finished a 50g pouch of this tea towards the end of last week. I found it to be an excellent and incredibly thick, vegetal, and savory Yunnan green tea.

Prior to the rinse, the dry tea leaves emitted aromas of hay, grass, and grilled lemon. After the rinse, I found new aromas of malt, chestnut, smoke, and corn husk. The first infusion then introduced a hint of spinach to the nose. In the mouth, the tea liquor presented notes of grass, hay, grilled lemon, chestnut, and corn husk chased by subtle impressions of honey. Subsequent infusions saw the nose take on buttery, woody, and even more strongly vegetal qualities. Malt, spinach, and muted smoke notes belatedly emerged in the mouth alongside strong impressions of butter, straw, asparagus, lettuce, peas, pine, minerals, and seaweed. There were strong broth-like umami notes too. I even found some subtler notes of honeysuckle, apricot, and sour plum on most of these infusions. The lengthier final infusions presented notes of corn husk, minerals, hay, and grass backed by touches of smoke, lettuce, seaweed, and chestnut.

I think everyone should know by now that I am a huge fan of Yunnan green teas. I almost always enjoy them on some level. With that in mind, I guess it should come as no surprise that I greatly enjoyed this one. It was a more savory, filling tea than I was expecting, but I found a lot to appreciate about it. Even if thicker, more savory green teas are not exactly your thing, I would still recommend that you at least consider giving this tea a shot. It is worth trying for its depth and complexity.

Do you tend to latch on to one or two teas and drink only them for several days or do you jump around? What is your tea drinking strategy? :)

Evol, I try to finish teas in the order I start them, so usually, I work my way through one or two teas at a time before starting on anything new.

This is a fairly savory green tea. Notes of roasted corn and mesquite wood are prevalent. There is some corn and honeysuckle sweetness in the background and aftertaste.

You really have to watch your brewing parameters on this one. Make sure to use low green-tea temperatures when brewing. It gets overly vegetal and bitter if you’re not careful with temps or brewing times. If you are careful, however, you will be able to balance the savoriness with a fairly rewarding sweetness.

Another interesting note – you can’t eat the leaves. They are tough and rubbery. My experience has been that tougher green teas tend to be more vegetal and bitter, just as this one is. Sweeter green teas seem to have more tender leaves. Not that I’m at home composing mixed green tea leaf salads or anything, but I think it’s interesting to note the difference.

Overall, it’s OK. I’m finding myself much more drawn to sweeter green teas like Laoshan, Xinyang Mao Jian, and senchas. But, this tea definitely has a backbone and will reward you with good, strong flavors.
*
Dry leaf – smells like a white tea at first, with honey and honeysuckle and light sandalwood notes. Then roasted corn and mesquite barbecue notes arrive. In preheated vessel – pungent grilled sweetcorn notes

That toughness in the tea leaves may reflect it’s Yunnanese origins, since large-leaf varietals would probably have tougher leaves. In terms of spring greens, I also lean towards more tender leaves from senchas, bi luo chuns, and the like. Really looking forward to this year’s harvest…as I do every year!

Yeah, good point. I should compare leaf size (age) as well. I don’t know if the tougher greens are also allowed to grow longer, thereby affecting their flavor as well.

Update: I’ve had this tea twice cold steeped after failing to brew it hot. Without the bitterness, it’s quite lovely. It has a crisp but mellow veggie taste up front (also what it smells like) that I’m not the biggest fan of, but then transforms into something spicy floral and leaves a tart fruit aftertaste. I keep making it for the notes after the initial veggie punch and am going to attempt to hot brew it again.

First off, I think I screwed up this brewing. I tried out a gaiwan for the first time and didn’t start with something more forgiving. I didn’t use boiling water but think it was still too hot. Started at 15s.

My main negative is some bitterness and dryness which is the part I think I’m responsible for.

Otherwise this tea was vegetal, something hay like, a little bit of toastiness, and later on a little bit of fruity sweetness. I am completely uncalibrated for green tea tasting though.