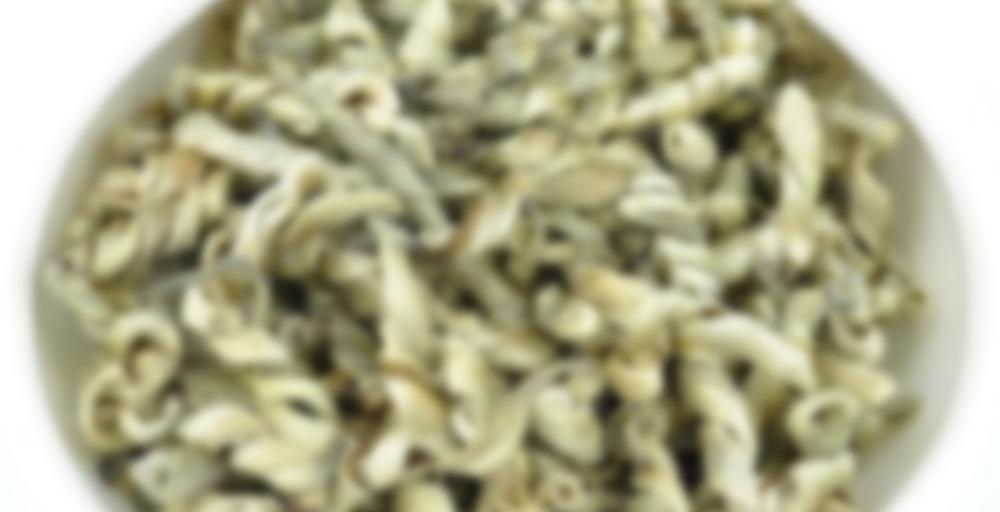 by Yunnan Sourcing
73
You

Just the bud shoots of the tea bushes are hand picked in a short 2 day window and then lovingly processed as white tea and hand rolled into these lovely “snow dragons”.

The taste is smooth, sweet and fruity and can be infused several times. The brewed tea is light green in color, and very pure and thick in the mouth.

We recommend brewing with 85-90C water in a glass cha hai or glass cup so you can watch the snow dragons unfurl and fly around inside the water.

An exquisite tea both in form and taste!

This was the last of the white teas I consumed this month. I think I finished my 25g pouch Friday afternoon. Sadly, this tea was the least impressive of the bunch. It was not a bad tea, but it was not as memorable or as unique as the other white teas I have tried recently.

Prior to the rinse, the dry tea buds produced aromas of hay, corn husk, sugarcane, smoke, and honey. After the rinse, I detected a stronger corn husk scent as well as new aromas of butter and cream. The first infusion introduced scents of lettuce, grass, and fennel. In the mouth, the tea liquor offered notes of cream, butter, hay, and corn husk backed by hints of grass, sugarcane, smoke, and honey. I also caught some vague herbal touches that I could not identify. Subsequent infusions saw stronger aromas of fennel and smoke appear on the nose along with scents of straw and cooked green beans. Stronger honey, sugarcane, and grass notes were present in the mouth along with belatedly emerging hints of lettuce and fennel. New impressions of minerals, straw, spinach, cooked green beans, and sour plum were also on display. The final few infusions offered mineral, butter, lettuce, hay, and corn husk impressions that were backed by subtle fennel, grass, spinach, and sugarcane notes.

Despite a nice, thick mouthfeel, this struck me as being a pretty standard Yunnan white tea. Aside from the initially distracting smokiness it displayed, there was nothing about it that stood out to me for any length of time. More than anything, it would probably be a suitable Yunnan white tea for beginners, but if you are someone who is used to much more depth and complexity and goes looking for highly unique and challenging teas, it will probably not be of much interest.

(Gongfu) Beautiful looking leaves: mostly consistent size, shape, and twirl on each spiral “dragon”. Nicely fuzzy and soft to the touch—I caught myself petting one for a few seconds…~80C here on out.
Nose after the first rinse smelled savory rather than floral like I’d get out of other white teas: reminded me of blanched green beans/haricot vert or edamame. Early steeps yield a tea that is not as sweet as other white teas, and is more savory: this has a thick texture to it. Notes of mineral to it too (maybe like wet rocks), and a haricot vert taste upon first tasting, which gives way to a mineral/wet rock finish and slight astringency that arises a minute after swallowing. Long lasting finish primarily in the front of my mouth.
This is not a forgiving tea for a beginner like myself, I struggled with it until recently.. Brew with care (maybe something like 80C; rinse, 5s, 10s, 15s, 20s, 20s, 25s) to avoid overwhelming delicate floral flavors with bitterness- even with the short steeping time, the thickness will come through.
Western style this tea is more forgiving: 80C 3 minutes—the low leaf:water ratio avoids bringing out as much bitterness