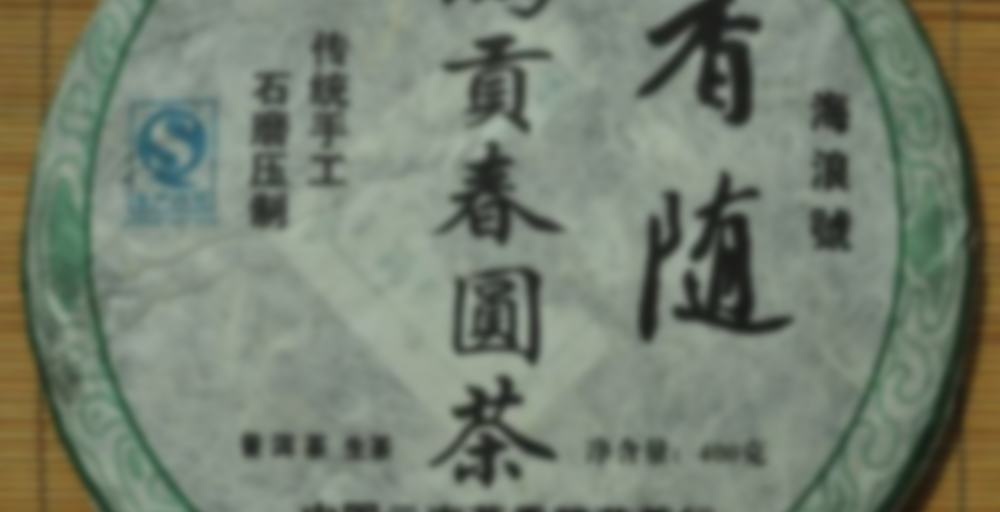 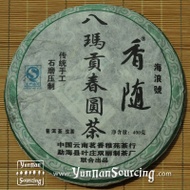 by Yunnan Sourcing
85
You

This is the first Nan Nuo production Hai Lang has created since his 2005 Ba Ma Gong Chun. The material used was picked and processed completely under the supervision of Hai Lang himself to ensure a perfect outcome. The tea comes from 200 to 300 year old tea trees growing in a natural tea garden in Ba Ma village. The tea is first flush and is full of intensity and character, while at the same time has some soft floral notes and a sweet after-finish.

As someone who mainly drinks young raw pu’er for the time being, probably my main issue with aged teas has been that it is hard to find teas where the quality of the base material matches the teas I’m used to drinking, and even if you find some the prices can get absolutely ridiculous and verifying the authenticity of the tea challenging unless you are dealing with a vendor whom you trust to trust that the tea is what it claims to be. While Hai Lang may not have started out as such, today he is mainly known for his more premium productions. This tea falls somewhere in between, being made from older trees yet remaining quite affordable despite having some age on it already. While familiar with the name, I don’t believe I’d had tea from Nannuo before. I believe it’s located somewhere in Menghai county, possibly somewhere in the vicinity of Bulang, but that’s about the extent of my knowledge.

For this session I used 5g of tea in a 75ml Yixing zhuni clay teapot. The pot is new, having only been used once before for a more casual session with this very same tea, but since this type of clay is in part appreciated for the less dramatic effect it has on tea compared to other types of zisha, I wouldn’t expect it to absorb too much of the flavors even this new. I rinsed the leaves briefly for under ten seconds and gave them a couple of minutes to absorb the moisture before proceeding. I did a total of eleven infusions, the timing for these being 10s, 8s, 10s, 15s, 20s, 30s, 45s, 75s, 2 min., 3 min. and 4 min.

The Nannuo started off very full-bodied and creamy. Really, really thick. There wasn’t much taste yet, but the sticky soup coated the surfaces of your mouth. The taste was creamy, sweet and mineral, with some hints of underlying bitterness or smokiness. The finish in particular had a subtle sour smokiness to it. Steep two was thick and creamy still. Sweeter, with more clear bitterness now. This was a bitterness that transforms into sweetness, leaving your mouth really sweet and a tad spicy.

Some astringency emerged in the third infusion. Nothing major yet, though. Otherwise it remained largely unchanged. Full-bodied, sweet, with a pleasant bitterness that turns into sweetness, leaving my tongue slightly numb afterwards. The fourth steep was the same deal, but now slightly drying and also boasting a nice caramel note in the finish.

The next four steeps did not bring much change. Brew number six was noteworthy though for its almost immediate huigan. Somewhere along the way the bitterness ceased being pleasant, turning into something less so. After this, starting with the ninth steep, the tea acquired a somewhat honied character to it, whereas the bitterness and sweetness were more muted compared to before.

While still possessing plenty of body in the tenth steep, the flavors were definitely getting thinner now. The tea was mainly sweet, but also bitter in the finish. The color had faded substantially by the final steep. While there was an adequate amount of flavor still, the tea was also starting to feel quite watery by this point. I decided to call the session there.

All in all the 2010 Nannuo was an okay tea. The material is definitely better than your standard factory production, but didn’t necessarily strike me as high-end. There is huigan and transforming bitterness — things you’d look for in, say, a Bulang tea — but overall I didn’t find anything particularly memorable or special about this tea. While the quality is better than some similarly aged daily drinkers from Bulang, I’d personally rather drink some of those teas than this one.

While taste-wise I imagine this tea hasn’t changed all too much from when it was young, the age is most evident in the texture and mouthfeel. The texture is definitely that of an aged tea which you don’t get in younger teas. While not a weak tea, the Nannuo doesn’t necessarily possess the amount of strength I would like to see in a tea to have confidence that it won’t go flat over the years. I’m not entirely sure how a tea like this would age, but based on how it is right now, it feels like it has a long way to go still.

This tea is so amazing. It’s just such a solid raw, with so much complexity. However, I don’t think I’d buy 400g of it, that’s just way too much tea, haha.

I was watching Scott’s youtube channel for Yunnan sourcing, and he was sitting out in his garden, and it just made me miss living out in the middle of nowhere again. I would love so much to be sitting out among a whole bunch of trees with no one in sight, and just feel the wind on my face and drink tea. Don’t get me wrong, living in the country was pretty depressing, no friends close by and being the only Muslims in town we got our fair share of prejudice against us. But I would kill to have that peace and tranquillity, and just drink tea outside under a big tree and not be disturbed by a neighbour mowing his lawn, or smell the puffs of smoke of another. and I think that this tea is absolutely perfect for a summer day out in nature. I don’t know how to explain it, but I just know that this tea would compliment a summer outside so well.

Hah, really went off topic with this one.

It’s green, vegetal, bright, more sour than it is bitter, and an overall great tea. The cha qi on this is great too, and the minerality leaves a sweet and sour aftertaste in your mouth.

You are among friends here my friend! Looking forward to seeing you grow with the tea.

Yes yes yes. I came back home from delegation, thirsty like hell and i was thinking – which one to drink. Ive decided to go for second part of the sample i got from Scott, just to give it another try. Previously i have brewed it with boiling water for more than 10 seconds few first steeps (8g of tea), now – since i wanted something to relax with, i went with 5g of tea and 5 secs first one and i was stunned. Very floral, very sweet, very refreshing yet relaxing and with the scratch at the back coming from tasty bitternes hardly noticeable with first infusions. Second one and 2 more i went with 10 seconds. First colder water – this one got me some more bitter notes then again with boiling and it came back to sweetnes playing first violin. I dont know what changed the experience – either me beeing tired, or tea airing 2 weeks more, or experimenting with temperature and timing – yet i have found tea that put me on my back floating with couds aside. Now when im checking my mouth – still sweetness with little camomile and sunflower notes. Enjoyable like hell :)

The sweet spot has been found!