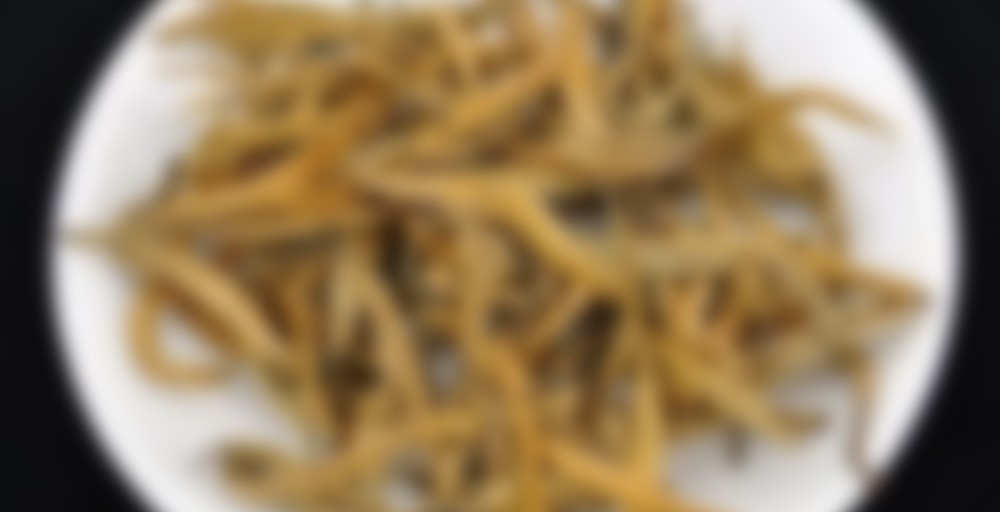 This tea is made from early spring tea (late March 2013) and is made from highest grade Yunnan Large-Leaf buds! Fermentation is brief and masterfully controlled to preserve the delicate taste and appearance of this rare tea. This tea is the goldest and hairiest in appearance that i have ever sold. Jinggu area tea is often referred to as “Da Bai Hao” (aka Big White Fur) for its prominent hairy white buds.

The brewed tea liquor is golden with the slighest golden and reddish hues. The flavor is smooth and sweet! For a stronger cup brew with more leaves or increase steeping time. This is a delightful Yunnan Hong Cha in both appearance and taste.

So, I used this beautiful tea in my tea photo project but I’ve never written a note on it? WTF? https://www.etsy.com/listing/192822968/beautiful-tea-poster-photography-collage

This tea came to me from boychik. THANKS! I love exploring these gorgeous yunnans. This one is not as sugary sweet as I expected based on its appearance. There are haylike flavors that remind me of a white tea, with malty and mushroomy notes asserting that this is indeed a black. It is also pretty mellow like a silver needle white. Thick and creamy too. Really interesting beast this one. And of course the dry leaf is just gorgeous.

I love the collage, so pretty

My kitchen wall loves it.

Another from the Big Box o’ Yunnan Sourcing courtesy of boychik! :)

Long, golden leaves steep up to a leathery, fruity, savory yet somewhat sweetish brew that smells like smoke but doesn’t really taste much of it.

30 sec, 1 min, 1.5 min all pretty much the same. Lighter flavors, sweeter, lighter color. 2 min, 3 min yields darker liquid with some bitterness and dryness. I think the sweet spot for me would be between 1 and 2 minutes. Enough time to get some depth but not so much that it turns more bitter than I like. Always possible I used too much leaf, as well.

Overall, while this was fine, I prefer Mandala’s Golden Strand.

The liquor of this tea was mostly a green tinged gold with a grey green ring, that became redder and browner in later steeps.

Flavour notes that I have found so far are: roasted smoke insence, leathery spice, a hint off aged cedar, hints of alfalfa, clover nectar, honey, cream, plum and occasionally plum/strawberry, hint of bitter cocoa, upper tones of malt, a warm sweet floral note, and a savoury vegetal note. Middle steeps were mostly, cream, fruit, and nectar, with leathery notes present in early and later steeps. Cocoa is very faint but it does counterbalance the sweet tones and provides some depth.

The broth is thick and creamy and the aftertaste was sweet and lingering.

This is a nice, giving and soft tea. Its resilience makes it ideal for gongfu brewing.

Thanks boychik for sharing!

I just love reading your notes.