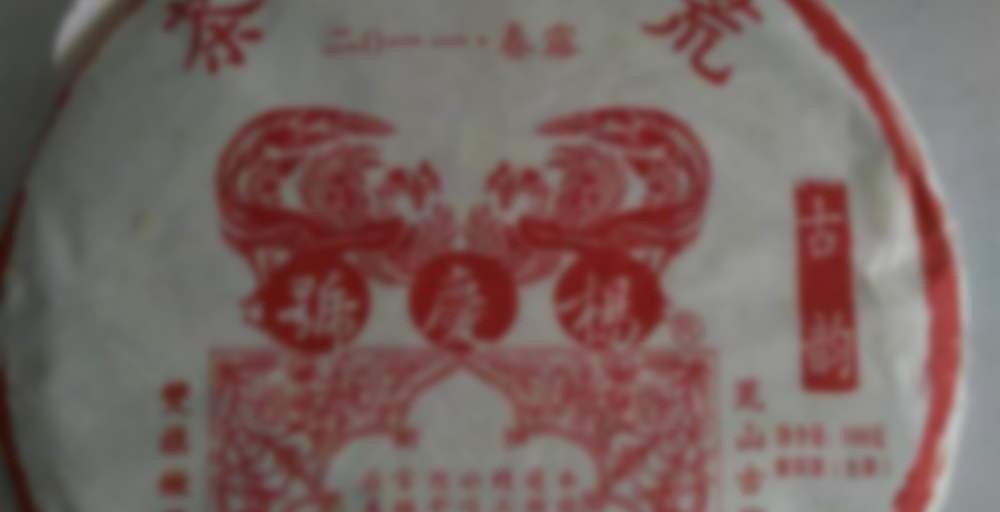 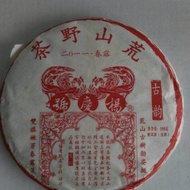 I drank through almost my entire 50g sample before I started to ‘get’ this tea. Maybe it just needed an extended period to acclimatize though. At this point in time, the tea no longer feels like it absolutely needs more aging before one could enjoy it, even though it could definitely benefit from further fermentation. It doesn’t seem to possess a hard-hitting qi, but I actually found it to be pretty defocusing at first and body-warming overall.

The first few times I tried this tea, I found it to have a boring, bitter taste profile with a relatively light body. The latter still holds, but it’s not as problematic given that the mouthfeel is not as one-dimensional as I thought. The liquor is very soft and slick, with a bubbly texture to it that makes it an engaging drink despite the light body.

Another point of note is that, yes, the profile is not very complex, but it’s actually quite pleasant. Vegetal and fruity notes dominate early on, while woody ones take the center of the stage in the second half. Clearly, the bitterness forms the foundation though, and medicinal notes are just about peeking through. Notable flavours include dried dates and orange. The finish is somewhat biting, and the aftertaste throat-cooling with a decent huigan as well.

Finally, let me speak to the aromas a little. In the gaiwan I can detect mushrooms, forest, cream and grilled red peppers. The empty cup scent is pretty interesting too with notes of spiced rum and raisins.

In conclusion, I must adjust my initial impression of the tea. Given the friendly price, this is actually a pretty good semi-aged offering from YQH, especially if it can continue to improve in the years to come.

These are hit and miss teas for me.

Unsure what I was getting myself into: The long awaited YQH tasting has come.
https://www.instagram.com/p/BCVOfkrRYKI/
Not knowing a thing about this tea, I went right into it. Within 11 steeps I had my thoughts collected and went another 6 steeps with no changes on those thoughts.
This tea brews easily which is a plus, but within the ability to brew it easily with no disappointment coming from astringency or bitterness there seems to lack depth. This tea hits the tongue and ends in a rather flat manner; therefore I can’t say there is a body to note about this tea. The taste is on the mild side, appealing to my personal preference, with a mellow color.
Reading about ‘gushu’ vs fake ‘gushu’, I was really looking forward to this tea and my conclusions were leading me to conclude that I was let down by this. There are many teas out there that slide off the tongue with pleasant flavor, but without a body or lingering qi… I really have no idea what would set this apart. I do have two or three more YQH samples to go through and each should be a step up from the one prior to it.

After writing my review I looked up the price and saw that it is an affordable purchase! Unlike many other teas that YQH offer, this doesn’t compare to a car payment. Looking forward to blind tasting the others and not knowing their cost.

This one still needs age in my opinion. Pack this away for 5 years or so.

is this a fake gu shu?

Upon inspection, the dry leaves are relatively large in size and have a thick, healthy look to them. Also, it is clear to me that MrMopar is much more skilled than myself at prying puerh! Barely any breakage!

I give the material a quick wash and inspect the nose. The wet leaves produce a rather dull nose… perhaps somewhat vegetal with very soft, barely noticeable, notes of plum in the background. Perhaps some mineral-y notes in there too. From my experience, this is rather common among Bulangs. The appearance of the soup is rather typical – clear with your golden hue to it.

Following a few infusions, I find that I enjoy the mouthfeel on this one. The soup is thick in the mouth with a brief initial cooling sensation followed by a sweet finish in the back of the throat, which seems to linger. There is also a very agreeable astringency that balances well with the sweetness that lingers in the back of the throat. This is a nice tea and would definitely recommend it.

Finally get to pull this one out of storage.
This cake is double wrapped and compressed like crazy. I had to break out the big pick on this one.
I pulled 10 grams out and gave it a rinse to open up a bit. The first 3 steeps were about 5 seconds each and combined into my big mug. The tea has decent body to it. The tongue is alive a bit as well. There is a touch of humid and it goes very sweet at the finish.
Next 3 were about 5 seconds as well and combined. I had let the leaf sit about an hour by this time. There is a little of the smoke and some of the nice bitterness is coming out as the humid part fades away. It is an almost sharp metallic hit in there somewhere. It is still alive and keeping the tongue alive and almost numb. This is till young at 4 years and is reminiscent of the other small sourced Bulangs I have drank. I think this has a bit more hit to it and I think this will be a wow tea in 5 more years, it is quite good now.
I haven’t had the Qui effect but it is still early . It does warm you as you drink it.
Steeped in the gaiwan.

I’ve heard this has been people’s least favorite out of the yqh bunch.

Probably so as I have only tried one other so far but I am a sucker for Bulang ,Mang Fei and Lao Man’E teas.

The bitters ;) I’ve heard some controversy over this Bulang; although, I could be mistaken. I just remember hearing one of the young YQH was a little “off”. Personally, I have not tried the Bulang.

It may be young but I liked it. I actually chose it from being the first one in the stack of YQH teas I have.

Not surprised you like it now – you go for the heavy hitters. ;-)
I think Mr.Yang has both great knowledge and good taste so we really can’t go wrong with any of his selections.

Considering the $/g is so low (it’d be something stupidly inexpensive like a $56/200g cake) it’s hard to go too wrong with this.

That being said, I think this is towards the bottom of Yang’s catalog. More of a sweet, not brutal Bulang. I also do agree with Dignitea a bit on this one. I had a couple sessions with it and I think it’s a couple years away from when I’d want to drink it..

So have you been storing it a few years? Is the humid flavor coming from your storage? O.o If that is the case, I’m shipping you my fridge and stash. :P

jschergen, I liked EOT’s Bulang a lot. It had a bunch more kick to it. I still think it needs 5 or so to be really ready. I think the 2007’s are starting to get there for the ones I have stored.
Cwyn, I just recently got this one and actually have it in a bag with the other 2 I got.

Which EOT bulang? The 2008 is excellent.

If the YQH teas are that sort of quality then they must be good.

This tea is very different from any of the EoT Bulangs. I enjoy those teas a good deal, but there’s a lot more pow with those teas.

In my anecdotal experience, qi really only becomes relevant from tea (1) when I don’t blend the steeps (2) when I’m very deliberately being calm and present with the ta and (3) usually cheating a bit and doing some basic qigong or taijiquan breathing and spinal alignment gestures.

Although, you get a raw tea old enough and it’ll pretty much qi you no matter what.

Yeah, I kind of favor that big cup too much sometimes. I do like the heavy hitters as many know. I like the brash kick in the teeth sometimes.
Other occasions I just like to sit and relax with a tea. This is really kind of rare but you have reminded me I need to do it more often.

I do a lot of blending with daily drinkers and teas I know well, but try not to with teas that are new to me.