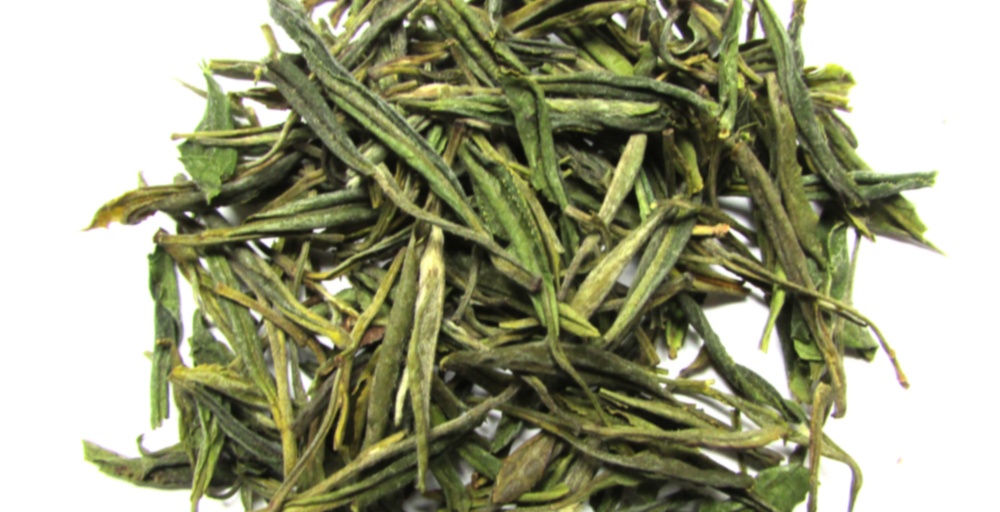 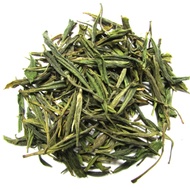 I’m not sure how I feel about this one….
It’s savory, but not vegetal, or grassy – so it’s not green. It’s might be a little woody or hay ish. I’m actually thinking maybe like a medium oxidized oolong – not a really green one and not a dark roast one – but something edging towards green.
This is a little too dry mouth for me, but it’s not bitter, and yet it has a little juicy quality to it – that sounds contradictory but that’s how I’m feeling.
I’ve had yellow teas before and this one is totally different than those.
I don’t think this is a bad tea, I just think it’s not to my taste.

Thanks so much Sil for sharing. :)

opted to try this one today. I’ve had a few yellow teas before and only one ever knocked my socks off. I’ve been searching for a similar one ever since. This one is pretty good. It’s got a delicious fresh and juicy flavour to it, while not falling into that trap of tasting like a green tea. Yep..even as this one cooled, it was just really tasty and delicious! I’ll likely pick this one up again since it’s the closest i’ve come to finding that one yellow tea i loved.

I haven’t tried yellow tea yet. I may look for this one when I order again from What-Cha.

I have a few yellow’s at home I should send you, if/whenever I get back. Or, just stay at my place when you go to Vancouver, then you can raid my cupboards!

hahahaha i may still take you up on that :)

Those of you who are familiar with me are probably aware that Yellow Tea is my favorite type of tea. But it is something that I don’t really want to drink every day because I do love it so much – I want it to remain one of those special teas for me. For one thing, it’s a rather costly indulgence, for another, the tea just tastes that much more special to me when I have it once or twice a week as opposed to every day. (You can get bored with favorite teas too!)

This is a lovely, lovely yellow! Nice notes of bamboo, nutty sweetness, hints of flower and a light creaminess. A better than wonderful tea experience!

I think I got a little bit spoiled by how amazing and evocative my first yellow tea (Darjeeling 2nd Flush 2014 Jungpana AV2 Yellow Tea, What-Chat) was, because while this was nice, I just kept thinking about the other one.

This one was roasty and astringent, with lots of corn and a bit nutty. A touch bitter on the first steep, though that mellowed with subsequent steeps. I was hoping that the character of this would develop some more but each of my steeps (four?) tasted pretty much the same, with strength and bitterness being the only major variation.

How about we have one of those ‘here is something you probably didn’t know about me’ intros to today’s blog? I sleep walk, sometimes I think I have more adventures at night than I do during the day! It was really bad when I was a kid, I wandered around everywhere, it got to the point where my parent’s had to build a special crib/cage thing around my bed to keep me from wandering around or falling out of bed. I also talk in my sleep and have been known to have whole conversations in my sleep with no remembrance of them when I wake up. My most recent adventure was last night, I woke up in my bathtub, no water or anything, I was just sitting in the tub leaning against a wall. So now you know some other random little factoid about me!

I think that today’s tea from What-Cha, Huoshan Huang Ya Yellow Tea, might be the first yellow tea to make an appearance on the blog! I have a few yellow teas in my collection, but they do not have review priority since I bought them myself, company supplied samples always take priority (it is just polite!) Before I get into the usual aroma description, we need a brief description of what yellow tea and by extension Huoshan Huang Ya is. Traditionally only produced in China, yellow tea has a lot in common with its close relative green tea, but it has an extra step in its production called ‘sealing yellow’ basically this means that the damp leaves were allowed to sit and ‘yellow’ during a slower drying period. Both the leaves and the liquor have a yellowish color to them and in theory this process makes them milder and less grassy tasting than green tea. Now this particular tea, Huoshan Huang Ya, comes from the mountains of Anhui, China, it was once an imperial tribute tea during the Tang Dynasty and was written about in Lu Yu’s work on tea. Sadly the methods of this tea were thought lost, but were rediscovered in the 1970s by some distinguished tea masters, the version of this tea we have now is not quite as yellow as it was back in the Tang Dynasty and is sometimes mistaken for a green tea.

Phew, that was a lot of info, and I even abridged it! I certainly recommend looking up yellow tea, there are a lot of really neat articles written on this type of tea. The aroma of the dry leaves is quite sweet, there are notes of lightly roasted sweet corn, gently roasted sesame seeds, bamboo leaves, and a tiny hint of tomato leaves. At the finish of the sniff there is a hint of smoke. It is odd, every yellow tea I have had has had that tiny hint of smoke at the finish, I find that really neat.

Once the tea has been steeped, the wet leaves take on an extra layer of richness. The toasted sesame and roasted sweet corn are stronger, they are accompanied by the aroma of fresh growing things and bamboo leaves. It does have a similarity with green tea, but it is also quite different. The liquid is a mix of sweet corn and bamboo with a tiny hint of smokiness at the finish.

For the first steep, oh wow, that is a sublime tea (I always feel like Morinth from Mass Effect 2 when I use the word sublime now) it starts with a sweet corn and a touch of roasted sesame, there is a mild sweetness and a touch of bamboo. There is a nice tingly mouthfeel at the back of the throat and a peppery aftertaste.

The aroma for round two is very similar to the first steeping, there is a bit more of the bamboo leaves and the roasted corn and sesame aroma has a sweeter note to it. The taste again starts out with sweet corn and sesame seeds, but less roasted and more creamy sweet. This transitions to fresh bamboo leaves and a touch of pepper. There is a hint of smoke at the aftertaste, also the mouthfeel is smooth and not tingly this time.

The third steep’s aroma is faint, there are creamy sweet notes of sweet corn still and a hint of bamboo leaves, but mostly that is all that is left. The taste has become quite delicate as well, it starts with sweet corn and a touch of roasted sesame. There is also a hint of bamboo, broken stems, and a hint of kale giving the tea a little bit of a bitter green taste. Oddly this steep had a cooling effect, as I sipped it I felt cool and very relaxed, I also noticed this tea has a decent kick of caffeine making me feel very mentally alert, luckily not at all caffeine buzzed. By steep three I was just on the edge of being tea drunk, it is a wonderful feeling to go along with a really delicious tea!

For blog and photos: http://ramblingbutterflythoughts.blogspot.com/2014/08/what-cha-huoshan-huang-ya-yellow-tea.html

My sister sleeps with her eyes open, and she talks in her sleep. I would have conversations with her while I was half asleep and not realize she was asleep all the time when we were younger.

Ha! I have been known to have my eyes open when sleeping as well, though not as frequently as the wandering around. Ah, sleep is so weird sometimes.