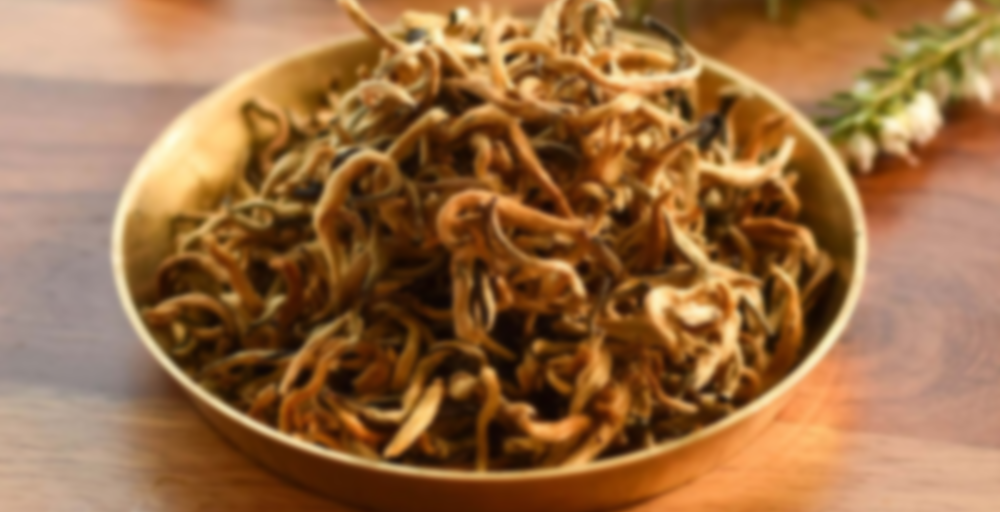 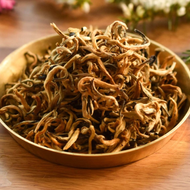 Full bud Yunnan black teas are an elegant expression of texture and aftertaste. Xingyang’s pre-Qingming picking has been selected and finished to represent a perfectly classic ideal of the Golden Buds flavor and texture profile. The downy buds make for a thick and rich brew. While Xingyang would usually blend buds like this into fine shu pu’er commemorative pressings, it is a pleasure to try such a pure expression of what their fields have to offer.

Once wet, the aroma of these beautiful, golden, downy buds is intensely savory. Thick hits of sweet potato are present, with notes of peppercorn lightening the mood. Occasionally these seem to combine into a subtle floral aroma.

However, when sipped there’s immediately a cooling swell of mint and camphor, and you can feel the crisp liquor dancing off the nerves of your tongue. As you continue sipping the flavor becomes more warm and savory, first transitioning to peppercorn and then malt and sweet potatoes.

It’s quite astringent for a Chinese black tea, so I’m not sure I can see myself going through a full session, but if you tolerate astringency well or want a comforting but moderately complex black tea to share a session of, this would be a great option (if they ever stock it again).

Very sweet honey smell from the lid and the leaves themselves do have a combined sweet potatoe, honey, pear, and rice pudding smells. Seems verdant isn’t lieing about flavours this time!

First steep. Flavour is much different than standard chinese black teas. A very strong fruity / pear taste to it, follows up with a ‘rice pudding’, sweet potatoe, and honey taste.

Fourth steep. Raised temperature slightly and resulted in less taste! Seems that if I let temp drop to the 190’s or so, it should be good. lets find out fifth steep.

Fifth steep. Flavour starting to wane, but still maintains that honey-sweet potatoe aroma. I also just ate dinner so that could be a factor.

Sixth steep. Mainly a honey taste but it’s getting fainter. Will need to do longer steeps here.

Seventh steep. The honeyed sweet-potatoe is back! longer steeps gave a slightly stronger flavour than fifth steep, and definitely stronger than sixth.

Eight steep. Forgot I was steeping so this one went 5 mins or so. But for a final, long steep, no bitterness just sweetness. Can’t complain.

Overall a really delicoius and surprisingly sweet black tea. I think this tea will average around 5 or so steeps til the flavour starts the dwindle, but those five steeps are excellent.