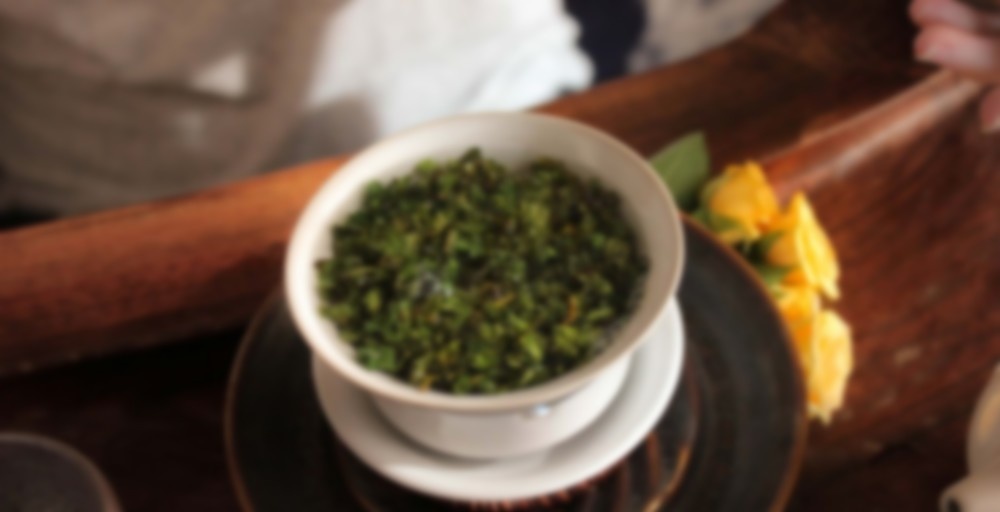 This citrus-heavy varietal is more similar in texture to a Dancong oolong for its woody undertones and sunny, fruity flavor. As this tea steeps out, it yields a very tropical pineapple and mango profile with jasmine aromatics.

After sleeping in way later than I had planned, I took the remainder of the morning to gongfu a 5 gram sample of this oolong. Prior to trying this, I do not recall ever having a tea made from the Da Dan cultivar. I found it to come off as a slightly awkward hybrid of a Tieguanyin and a Dancong. It was worth trying, but it was not my thing.

Prior to the rinse, the dry tea leaves emitted pleasant aromas of butter, cream, custard, lilac, violet, sweetgrass, and citrus. The rinse allowed scents of vanilla, osmanthus, and cilantro to emerge. The first infusion produced a near identical bouquet. In the mouth, I detected notes of violet, lilac, osmanthus, sweetgrass, butter, cream, custard, vanilla, and some sort of citrus. Subsequent infusions brought out touches of leaf lettuce, rose, mild cinnamon, and minerals, as well as definite touches of orange peel and pomelo. The later infusions were dominated by butter, mineral, cream, lettuce, cilantro, and sweetgrass notes underscored by barely perceptible touches of citrus and fresh flowers.

For me, two things happened that limited my enjoyment of this tea. First, this tea peaked way quickly, faded early, and did not change all that much with each successive infusion. I could tell where it was going pretty quickly, and quite frankly, that bored me a little. Second, the almost soapy slickness that I get from many Dancongs (especially Chou Shi Dancongs) became more prominent with each infusion, and since that texture is not all that appealing to me, I had to fight off the urge to give up on this one early. At this point, I would also like to add that, in terms of flavor, there was not much separating this tea from many jade Tieguanyins. If I hadn’t known what I was drinking, I probably would have thought that someone had ruined a perfectly good spring Tieguanyin by washing the gaiwan and not rinsing it out all that well prior to brewing. Judged solely on the aromas and flavors on display, this was not a bad tea, but it didn’t thrill me in any way either.

I don’t know a lot about oolong, nor do I have experience drinking different varieties and harvests. So, if you told me this was a Tieguanyin I’d just bob my head and say “yes, with a dash of orange-flavoured fluoride gel I used to get at the dentist!” Such a connoisseur.

I forgot about the fourth steep and now it tastes like a typical dacong or a second steep Darjeeling; fruit-sour and floral.

What are you talking about? You know plenty about oolong!

I’ve only made it to a fifth steep like once haha. As long of an attention span I have for pretty much everything in life, drinking more than three steeps of oolong is a challenge for me.

I know some basics, but not a whole lot. I do know enough that I should’ve known better with this one though. It looks so green but I’ve yet to enjoy “Dancong Verdant” anything.. :O

I don’t have the greatest attention span either, but sometimes resteeping a puerh or oolong is an easier decision than choosing the third flavoured tea for the day. It’s a combination of laziness, poor decision making, and excessive tea drinking!

I am certainly not an oolong expert, but I am fascinated by the flavours that emerge in various steeps. Although my attention span is not all that, my curiosity keeps me going.

So, I finally decided to drink down my little sachet of this lovely oolong. It smelled intriguing when I opened it, a little like Christmas-cake or cloves. I was certainly expecting something a little more jade-tieguanyin, which meant it was a pleasant surprise.

The rinse was honey-gold coloured and also smelled of Christmas-cake, whilst the wet leaves had a more characteristic vegetal smell.

The first post-rinse infusion was also honey-gold (as opposed to the pale green of Master Zhang’s usual tieguanyin), and it carried the same Christmas-cake smell, but also really reminded me of something very specific: Iranians cook a side-dish with barberries called zereshk polow (pretty much "rice with barberries) that’s brought out for celebrations or special occasions. To prep the barberries, you usually quickly fry them, in butter, with a table-spoon of sugar. And then afterwards, you fold them through the rice along with some saffron-infused butter. And that’s exactly what this tea smells like. It brought a really nostalgic smile to my face.

The tea has a lovely, mellow, smooth body, and little/no astringency (as I’d expect from something related to tieguanyin). The next set of infusions were equally lovely, with the delicious zereshk polow scent and smooth, buttery, Christmas-cake essence lingering deliciously on the palette afterwards.

The little note that came with the sachet described orange blossom, mango, sticky rice, clove, and papaya leaf. Though I can’t pretend to know what papaya leaf tastes like, and I’m not sure I got orange blossom or mango, I can certainly see where they got sticky rice and clove from. And, I guess, Christmas-cake can have orange essence in it, so there’s deffo a citrus note I could pick up.

I really enjoyed this tea, and was quite surprised by how different it was to Master Zhang’s ‘standard’ Tieguanyin (which, I’m sure anyone that’s followed me for a while will know, is one of my all-time faves). I’m not sure this would ever replace it, but it was certainly a pleasant excursion.

For how Verdant described the flavor profile, it really misses the mark. Produced by Master Zhang, it tastes almost exactly like his Tieguanyin offerings. If it were a Tieguanyin, I’d give it high marks, but as something that is supposed to have strong notes of mandarin and pineapple (which it doesn’t), I’m let down. Perhaps my perception is thrown by the amount of 1st flush Darjeeling I’ve been downing recently, but I really feel there is little, if any, citrus to this. It’s much more vegetal.

Blessed feast of Annunciation to everyone, and to those on Western calendars, a slightly premature Happy Easter (we have five weeks to go for ours this year).

Finally one of these oolong where I can taste something other than flowers!

The citrus notes here are VERY strong, creating something more like an orange blossom profile rather than jasmine or osmanthus. Big, tart, drying tones followed by back of the throat sweetness.