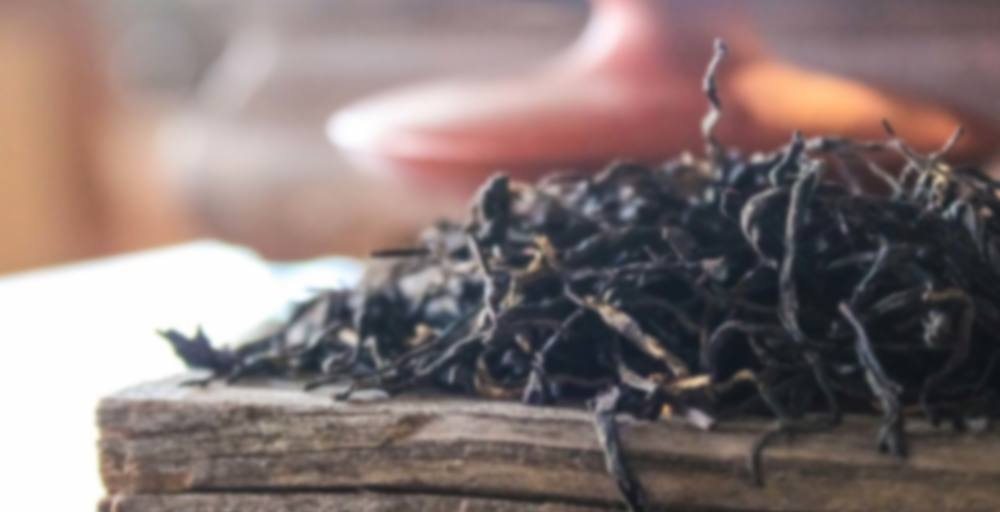 by Verdant Tea
78
You

Our farmer partner Li Xiangxi loves to speak about Wuyi Gongfu black tea. Situated high in the Longchuan Gorge valley near Tongmu amid wild bamboo forests and old growth tea trees growing out of the rocks, Li Xiangxi considers herself more caretaker to the wild tea trees than farmer. Wuyi Gongfu Black is so exciting because the unpredictable, beautiful and complex flavors of each wildly propagated tea tree meld perfectly in this rustic and honest expression of the land. Wuyi Gongfu Black tea is one of the only styles suited to the wild tea.

The aroma of the wet leaf evokes angel food cake soaked in elderberry infused honey or a drizzle of butterscotch. The taste is surprisingly light and delicate, mellow and welcoming. Sipping the tea actually feels like standing in Li Xiangxi’s backyard, deep in the mountains of Wuyi.

You can taste the wild bamboo forest through soft notes of fresh bamboo shoot. You get the bright sunny flavor of Li Jiangxi’s orange trees in the aftertaste. The deep and rocky mineral flavor forms the base of the whole experience, evoking the tea trees growing straight out of cracks in the rocky mountain slopes.

When a tea says the style of brewing you should use in its name, you should listen. Steeping this western style really doesn’t do it any justice. Steeped at 160 and now rewarming my water for another go around. It would be a shame to do only one brew with a gongfu session. 10 seconds seems too quick for me. I want to experience some deeper tones. Though it does have some interesting sweet notes mixed in with the twig notes. As you steep longer light compost notes develop. No astringency. It’s an unassuming black tea. Would not be good for milk or sugar drinkers as it doesn’t steep up briskly but also nothing incredible for the purists. A good tea to have in the afternoon during siesta.

Here is yet another review from the backlog. I wrote a preliminary tasting note for this tea way back on October 23rd, but never got around to posting a review here on Steepster. Much like the Old Tree Wuyi Gongfu Black from Verdant Tea that I tried about a year or so ago, I found this to be a very good, reliable black tea, maybe not the sort of tea I would reach for regularly, but still nice nonetheless.

Prior to the rinse, the dry tea leaves produced aromas of honey, toast, cocoa, and malt underscored by some hints of spice. The rinse released new aromas of yeast rolls, roasted nuts, and rock sugar. The first infusion released a clearly defined touch of ginger on the nose. In the mouth, I found notes of honey, cocoa, and toast on the entry that were soon balanced by notes of roasted nuts, malt, and ginger. Additional flavors of rock sugar and yeast roll emerged just prior to the finish. Subsequent infusions predictably brought out stronger yeast roll and rock sugar notes as well as impressions of moss, cinnamon, pine, cedar, minerals, and wet stones. I occasionally noted some tobacco and vanilla impressions too. The later infusions were dominated by lingering notes of minerals, malt, moss, wet stones, and earth balanced by a subtle honey flavor.

I generally like the teas Li Xiangxi offers through Verdant Tea and this one was no exception. Though I have had somewhat better Wuyi black teas, this was still a nice tea. I would have liked to see a little more thickness in the mouth and a little more longevity though. Still, this tea was well worth the purchase. I would have no real issue with recommending it to fans of traditional Chinese black teas.

I’ve been really slack with my tea notes. The past spring and summer got wicked busy, and I had a few health issues. Throughout the summer, however, I’ve been thrilled with the Verdant Tea of the Month boxes. The different oolongs are an especial treat for me, and I’ve learned a TON about strip style versus rolled style … and I’m developing a new appreciation for toasty oolongs. I still prefer the lighter, floral ones, but hey, please Verdant, educate me.

That said, I’m reviewing the Wuyi Gongfu Black because it’s the one I drank most recently. I did not expect to enjoy such strong mineral notes with a cocoa-bike back tea, but I did. The mineral notes are almost sweet. I’ve enjoyed this tea while working; its not so arresting that I just sit and think only of the tea. My loss, I expect. Still, a delightful Chinese black tea, gentle yet nuanced.

I don’t know if any of you purchased this one for the new spring 2016 harvest when verdant was doing their preorders, but this one took a bit longer than they expected for verdant to get it, so they replaced it in my order with a black buds jjm, and then refunded my purchase of this and on top of that, they sent me this along with an extra 5g sample once they’d received it, and on top of that, they gave me $5 of tea cash! I wasn’t even really upset that the order was taking a bit longer. I really appreciate Verdant tea right now. I kinda think they lost money from that purchase of mine because I’d had $10 of teacash and .. Well anyways. They’re good people. (they also sent me 2×15g packages of this tea instead of the 25g I originally ordered.)

okay so the dry leaf is a lot of fresh cherries and earthy cocoa, a bit of wood. It looks black and twisty but they’re smaller than average twisted leaves
The wet leaf is like a laoshan black but more milk chocolatey and less of that sort of medicinality..
It has this intense creaminess, lots of chocolate, it tastes like hot chocolate on the way down, but then the aroma is a lovely, fruity, cooked apple and peach, god this is my kinda tea, the same milkiness as the zheng shan xiao zhong from li xiangxi, only with an aroma that I’m much more fond of personally, it is missing a lot of complexity, there’s maybe 2 or 3 notes that you can really find, milk, cocoa, cooked apples, I don’t know what else. Maybe a bit of a breadiness?

Okay this is an increadible hot-chocolate tasting lovely desserty tea, but it’s not keeping me interested too much, it’s not shifting between steeps, and the flavours are a bit muddied, and hard to distinguish, I get some barley later into the session, and a rocky astringency that’s quite nice and pretty consistent.
This is something I would keep around all of the time cause like.. damn but it’s kinda like a muddy version of my Ming Jian. It’s a decently affordable daily desserty tea.

This is a hard tea to review. I greatly enjoyed drinking it, but was not overwhelmed with uniqueness of any kind. Rather, it was simply enjoyable. The flavor has hints of caramel, honey, and sweetness with a slight astringency. The cup is very smooth. I would recommend as a black tea, but it is nothing unique, albeit very enjoyable.

Backlog. Sipdown.
8oz, 208F – fruity, malty, cherry aroma, thick, creamy
I like this one, however, it’s similar to other teas that I’ve had. Could raise the rating a little to 78.

Really nice tea for work. It can handle the strange steep parameters that happen. Much better in hotter water than cooler.
Not sure it’s worth the price but good solid black.

The dry smell of this tea took me back to the barn at my house growing up. It smells exactly like horse feed pellets, it is amazing how a scent can take you back to a time in your life instantly like that. The steeped tea has a malty hay aroma. It has a sweet malty flavor with notes of hay, malt, molasses, and a hint of chocolate. I really enjoyed this tea, flavor and nostalgia in one cup.

I made this one the way Lance would like it(since it was for him)with some sugar before I even tried it straight and OMG! it is delicious, was well worth the long wait.
Im enjoying a few of these Verdant teas for Lance today since He missed them.
This one made Lance’s way is chocolate(milk chocolate) and caramel and rocks and minerals and kinda floral maybe.
We’ve had many teas like this one but not this particular one from Verdant, others were a little more bold and robust, This one is more gentle with subtle notes and very relaxing, a perfect tea for enjoying in the afternoons. I usually like these types teas a little bolder but this is damn near perfect! I think its the timing, great afternoon tea.
I may it Lances way with a little milk too for a not so strong “builders tea” that may be nice.
The chocolatey notes of this one was very interesting because it was actually like milk chocolate not the usual dark chocolate or cacao notes, it was very good with sugar like this, No lie, Yummy!

Damn, this Tea is really good all the way around, I made it my way this time, 15sec steep in yixing no suga, its excellent! Very very smooth, a little, citrus bite, very subtle malty note and Caramel lots of caramel notes, the type of caramel notes that reminds me of whiskey, I like whiskey, I really like this tea tho.
I think I have a buzz,maybe from the sugar of doing it Lance’s way first or maybe a nice little teabuzz, either way its good.

Definitely try this one sweet if you tend to like sugar in your tea(some folks do, lance loved suga in his tea) but also Definitely drink it straight also, its like day and night, pretty damn good tea.
I could really get into a habit of sipping this one straight everyday, in fact I think I will make this my everyday 4 oclock tea, I’ll drink it everyday until it is gone and maybe by then I’ll have gotten paid from the new job and will have ordered some more.
I wish we had tried this earlier,Lance would have drank this one up for sure.
Some teas just hit the spot!

I’ll do a better review soon when I spend a few afternoon with this one.