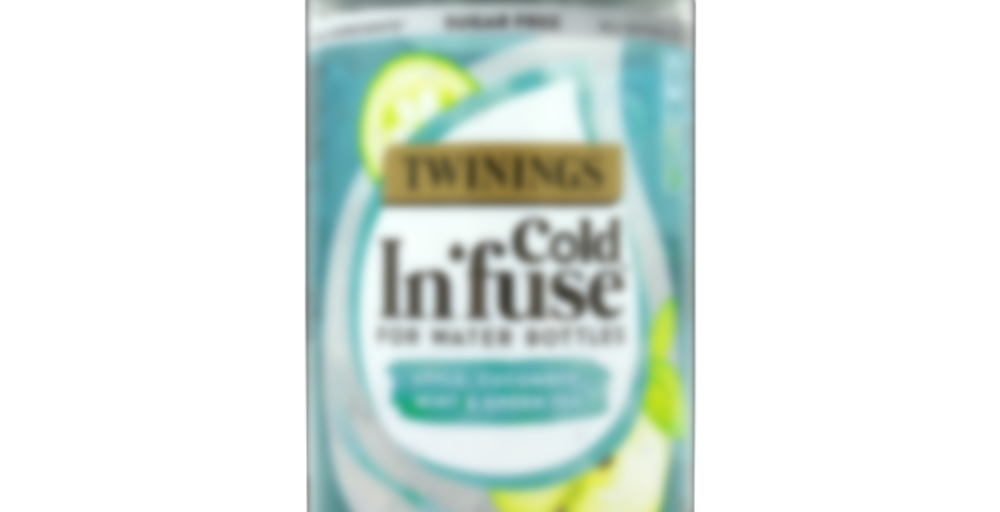 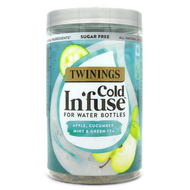 Twinings Cold Infuse gives you the delicious taste of apple, cucumber and mint with green tea to liven up your water without any of the hassle. Our infusers are easy to use: just drop one of our infusion bags into a water bottle (500ml), wait for 5 minutes – stirring or shaking occasionally – and enjoy!

Want to liven up your water? Why not try dropping one of our cold infusion bags into sparkling water for a healthy, sugar-free alternative to fizzy drinks.

Designed to drop into your reusable water bottle, our Cold Infuse is the perfect aid to helping you drink more water throughout the day, wherever you are. Simply drop, leave, shake and enjoy!

This was one of two teas I got for my birthday from my parents, the other being the Pink Grapefruit and Orange cold infusion which I haven’t tried yet. I was curious about these because the instructions say that you only have to use one teabag for 500ml, and you only have to leave it in for 5 minutes. How could that be possible?? I have no idea if it’s true or not, because I left my teabag in the water bottle for a few hours like I would with any cold brew. Maybe I’ll try it the recommended way later. As soon as it started steeping I was hit with a delicious apple scent, more like a hard-boiled sweet than fresh apple. It’s by far the most prominent note in flavour, too, but not quite the level of sweet or artificial I was expecting from the scent. There’s a minty background which adds a really refreshing twist, but I didn’t notice the cucumber at all. There was a slight waxy note I didn’t love, although that could be my fault for leaving the teabag in for so long. I left the bag in as I drank it and refilled my water bottle after I finished, which I then left in the fridge overnight. The flavour of this second steep was a little more delicate, but still pretty flavourful, and less waxy so overall I think I preferred the resteep. I was hesitant to try these when I first saw them in the shops because it seemed like a gimmick, and quite expensive for what amounts to 12 teabags. I’m glad I got some for my birthday though because I’m actually quite impressed, and on the strength of this one would consider picking up a couple more flavours to try. The watermelon one is calling my name!