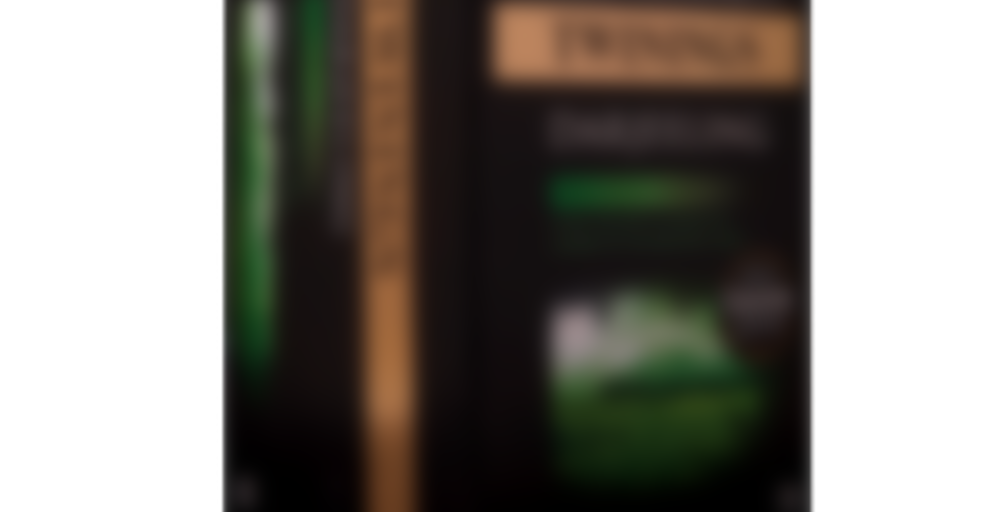 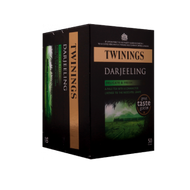 with 43 Ratings Rate this tea Rate This Tea

This light golden black tea from the foothills of the Himalayas has a delicate and unique character that is likened to the Muscatel grape.

Darjeeling teas are grown in the foothills of the Himalayan Mountains in northeast India. The high altitude, soil and climate of the Darjeeling plantations contribute towards the unique and delicate taste of this tea. Twinings Darjeeling uses the finest first and second flush teas (those picked in the spring and summer) in this blend. Darjeeling is often regarded by connoisseurs as one of the finest teas. Darjeeling is best drunk black or with a touch of milk.

Drinking this while fighting with the scanner at work…Caffeine much need – the person who lives below me has taken to blasting music at 7am for the past few days. Yes my alarm was set for 7:15 but I wanted my 15 minutes! Grr!

Anyway about the tea. Its okay. Since I have no control over the water temp sometimes this tea comes out rich with a wonderful honey note and sometimes a little flat and dry. Today is a flat and dry day, but like I said I need the caffeine. And I have lots of lovely tea to drink when I get home and lots of lovely new tea-ware to do it in!

Lazy this morning after my walk, so its bagged tea. Last time I had this tea I wasn’t very impressed. It was my fault since I forgot to set my timer. This time this tea was much better. This tea is not bitter or astringent and is floral to the smell. Although its morning, I consider this to be an afternoon tea as its very mild and smooth. I will have to up my rating a little.

On my way to a conference. Can you sense the excitement? O.o

We stopped at Cracker Barrel for lunch, and I asked for hot tea. The waitress brought out two bags of this with a mug of hot water, and a little pot of more water. I steeped for about 3 minutes, and was surprised by how much I enjoyed it. Couldn’t really make notes about what I tasted, but I’ve tucked the second bag in my purse to have later!!

I first tried this at a Cracker Barrel too!

BITTER! I finished the cup. I’m not sure how but I did. Now, where’s my medal? This was terrible straight so I added some milk. The milk made it slightly more palatable but it was still dump worthy. Now, on to find something drinkable!

Boiling 2 min, 0 sec
Yours I Like This
7 likes
0 comments
Edit

Hot tea with milk and sugar at Cracker Barrel was a nice complement to a hearty breakfast with my visiting in-laws. I was pleasantly surprised that they serve Twinings Darjeeling. I was expecting Lipton, Luzianne, or at best Bigelow — something plain and/or Southern, not something “exotic” and British!

Keeping that black trend going today…every sip induces a pause and moment of reflection…the color of this tea is perfect, a deep dark amber. Through the sip there is a swiriling of lightness, to slight astringency, then a smooth aftertaste.

Somehow I thought you might appreciate that!
I have green days, black days…fruit days…and even spicy days!
Themes are good.

I wanted a nice warm drink before going to bed but I know that if I drink a stronger black tea I will stay up a little later than I mean to. (Still have to go to work in the morning.) So, brew it weak, put milk in it, and out comes an instant cup of comfort that will actually help me get to sleep. For some reason this type of tea really helps me relax.

I’m not sure why this tea appears twice on Steepster, so I’m just going to post the same review under both of them.

I first tried a bagged Darjeeling tea from Lupicia. It was a Second Flush and pretty light. I probably watered it down too much, which I tend to do sometimes with Lupicia teas.

But this Twinings bagged version was a completely different experience, and not for the better! This wasn’t watered down at all. It created a nice brown liquor and seemed to be a normal cup of tea. I drank it straight without milk or sweetener.

It’s not the worst thing I’ve ever tasted, but I did not like its taste at all. It’s hard for me to pinpoint what it is I don’t like. I think it’s just the taste of the tea itself. It’s not that it’s bitter or astringent. It just tastes…not good.

The first sip is unassuming, average, black tea. But then it’s just yucky. I couldn’t finish my cup. But my boyfriend drank his and the rest of mine down and said, “It just tastes like tea. I don’t know what you don’t like about it.” And neither do I.

But this is not one I’d buy again. Now I want to try the Lupicia version again for further taste comparison.

Anyone know why this is called the “champagne of teas”? It does elicit the same reaction from me as champagne: Blech. I’ll give it that.

Boiling 3 min, 0 sec
Yours I Like This
3 likes
1 comments
Edit

Don’t give up on Darjeeling completely… I’ve noticed that there are so many unique nuances with different Darjeeling teas. When you find a good Darjeeling, you might understand why it’s called the Champagne of teas. It has a light, almost crystal-like taste that is crisp and fruity. The finish is dry and wine-like. Sweet.

Okay well, been a while, right? But I had a cup of this once I woke up. It’s not my first taste of it. I’ve been sipping this tea whilst doing the morning paper’s cryptograms for about a week now. So I’ve had time to think.

The liquor is a dirty rust color. It has a dry sour taste, plenty of a polyphenols cranking up the astringency. And don’t say I steeped it too long, I did not. I’ve tried plenty of different times. The aroma is tanned leather, sprinkled with cinnamon.

I’m not a fan of black tea. I don’t like weak tea. I do not care for weak black tea. But this is acceptable. I rate this with Irish Breakfast, although I like it almost a tad bit better.

This is one of the tea’s that I was given for my birthday. I am drinking this tea and eating some left over birthday cake (twas my birthday yesterday) . Such a nice way to end the day _

I do not have any sweetener or creamer for the analysis of this tea.

Colour: Soy sauce, a very dark brown.
Smell: The very floral and unmistakable fragrance of Darjeeling. It smells as fresh as a green tea but with much more floralness and yet slightly bitter.

Taste: A decent cup of tea overall, what I expected from Twinings. Quite fresh but not the best as it leaves a slight bitter after taste, a little too bitter considering the full flavour altogether. That could be taken away nicely with half a spoon of sugar (much more than that and you would miss the full flavour of the darjeeling). Perhaps a little milk instead of the sugar would suffice. I shall try that next time. A nice cup of darjeeling though for those of us who do not always have the time to brew from fresh leaves.

Overall I would say it’s very relaxing and so easy to make meaning that you could transport this everywhere (work, home, friends house etc). It also goes lovely with my birthday cake…I think this is a must have at work tomorrow towards the end of the day.