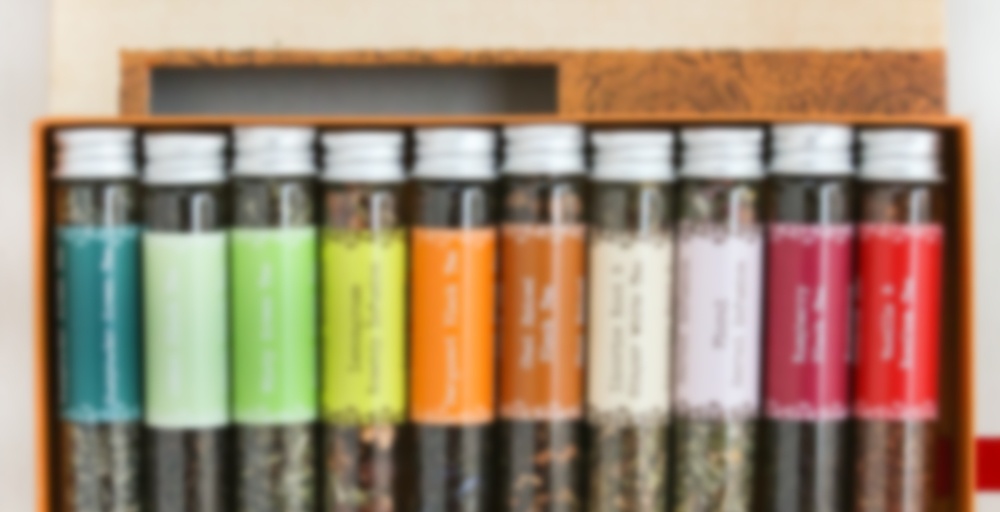 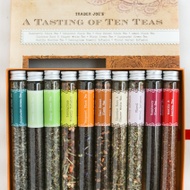 A Tasting of Ten Teas

Just a Taste of Spring

After much deliberation between three of us (me, myself, and I), I decided to review each of the ten teas separately to make the individual tasting notes easier to find. With that in mind, the tea of the day is:

I really like these cool glass “test tubes” that package the ten teas. When I unscrewed the lid of this one and stuck my nose inside, I could immediately smell the vanilla. I steeped the orange/brown leaves for five minutes at 212 degrees.

The brewed color was orange/gold. A faint presence of vanilla was detected in the aroma.

The flavor of this tea was pretty much all vanilla. I could taste the tang of the rooibos when I concentrated, but vanilla best described this selection. The flavor was smooth and there was no astringency. However, the vanilla aftertaste stayed on my tongue longer than I preferred.

This is the second of the teas in Trader Joe’s ten-pack that I’ve tried so far. It’s not an unpleasant tea. I would probably like it better in the afternoon than I did in the morning.

If/when I use up these teas, I’ll probably rate them individually, but… Well, I was feeling a little low on tea since my birthday is a few weeks away and my birthday present order hasn’t come in yet. I haven’t spent anything on tea in 9 months, and I’m due for some big stock-up orders this year.

I went grocery shopping today at Trader Joe’s and I found this adorable little set of tall glass samples with 10 different teas. It was 121 g. for $12.99, which… Looking at my purchase in retrospect, it may not have been the wisest way to spend my first money on tea this year. It’s true that I don’t like flavored tea, but this one is filled with things I don’t mind too much: mint, lemon, bergamot. And some of these things do feel good on the throat when I get sick in the winter, so… I went through with it. Plus, a healthy majority of them aren’t made with fake natural/artificial flavorings, so that pushed me over the edge.

If nothing else, it will look like nice loose leaf tea for when I have non-tea people over and don’t want to part with my favorite stuff yet. I know that’s awful. Please don’t judge. Due to all my health issues, I’m kinda broke right now.

I hope it’s okay to go ahead and write this when I haven’t tried any of the teas yet — I’d prefer to review them individually. I did go ahead and smell them all. I’m happy to report that the only one with an odor that made me nauseous was that of the Raspberry Black Tea, which is a pretty good ratio for me with flavored tea. And it’s unsurprising because this one has “raspberry flavoring,” and fake raspberry flavoring is my most hated fake flavor (Fake watermelon also ranks pretty high.). I probably won’t ever try this — I’ll give it away. Ugh… I love real raspberry — hate the fake stuff. Other than that, I don’t mind the mint or lemongrass or anything else some of these blends have. Much better rate than I anticipated.

For what it is, this seems more decent than I expected, but take that with a grain of salt. It’s a tea taster set from Trader Joe’s, and I’m not expecting greatness. It’s the only loose tea I’ve ever seen there. It looks better quality than that stuff, but we will see as I go through them.

If nothing else, I’ll continue using the little glass containers.

I stumbled into my trader joes grocery, picking up odd items here and there. Then I saw it… The Tasting of Ten Teas gift set.

I have tried them all but my favorite is the Raspberry Black Tea. I wish they would make this alone! So yummy and you get a strong raspberry feel without anything artificial. Not sure about the caffeine count or how much to use with any of these. My only complaint is that their isnt enough information on the package or individual teas. Also the opening of the tube isnt the best for getting tea out. Still very small complaints considering this gift set was only $12!