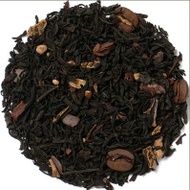 From The Tea Table

Even if you’re not a coffee fan, you’ll enjoy this new blend first thing in the morning. Contains black tea, broken cocoa bits, pieces of almond-based brittle, chocolate chips, coffee beans, flavoring, and freeze-dried yogurt granules (contains dairy). Great with milk and sugar! Use one tsp. per cup and steep for 3-5 minutes in freshly boiled water. A great coffee alternative.

About The Tea Table View company

The Reinvention of Tea

It’s 6:42 in the morning and I haven’t slept. Sure, I rolled around in bed for a few hours, but it’s no good. I have to be at work in 2 hours and 15 minutes. Maybe it’s my fault for having no self control.

“Nah bro, you got this. One more cup of tea, and three more issues of The Walking Dead. You’ll be able to catch all the way up by tomorrow!”

“Three hours?!?!?! Three hours?!?! How many issues did…how much tea…this can’t be. Where is the nymph who stole my time? I demand to know!”

Well you might as well start the day with some faux coffee before you get into a breakfast blend. The bag certainly smells a bit like coffee, but there’s more there. The cocoa and almond brittle bits are there to dress the coffee beans in a sequenced jacket. Not the light, ever so slightly glimmer sequence, but the disco ball fish scale sequence that demands your attention. You will not speak with java without them being heard.

Once brewed the smell of the earthy leaves take the wheel, and the sugary roar of the aforementioned scents nap in the back seat so our grizzled old friend java can ride shotgun. Oh they’re still there talking in their sleep, but they needed some rest before the real show started. This being a sample with about 2 1/2 teaspoons you decided to get weird. There’s that nice solid 16 oz mug that’s your standby, and a smaller 12 oz next it. Doing no real math to figure it out, you decided to pour a bit of milk and add some sugar to the larger vessel while leaving the other plain so you could have dueling cups. So that’s one full 16 oz cup with milk and sugar (3 1/2 min.), and about 5-6 oz’s of the plain brew in the other (5 min.). Good for focusing on one cup? Not at all. An interesting way to start the day that never really ended? That tired grin on your face sure seems to indicate so.

The naked cup sees Java struggling with his seat belt, wanting to jump out of the car at 90 miles an hour, when freshly poured. Give it a couple minutes and cooler heads will prevail. Once the old man gives up and settles in, you get to hear him mumble on about how strong he used to taste. He doesn’t have the fight left in him to yell it at you anymore. It’s more like he and the others swapping stories now. Nice, full bodied, malty stories, so smooth that you know they’ve learned to play off each other when entertaining an audience. Yogurt even pops his little head up every now and again with a little quip. By the time this half cup’s run out of gas, you’re wishing you’d have given it center stage. At night it’s not what you’d be looking for. Too familiar. Too relaxed. But sitting here, waiting on the sun to rear it’s ugly head and remind you what a long and painful day is approaching, you’d give anything to have those old familiar voices keeping you company. The rave still going on next to you is fun, but it’s not what you’re really in the mood for right now.

When you stop to stretch your legs and get in the other vehicle, you’re quickly presented with the fact that this is a party bus with Neal Cassady at the wheel. At the door Almond, Yogurt, Vitamin D Milk, and Sugar ask if you’re here because you got their invitation. They’re not mean of offensive about it, they just want to make sure that you know who exactly is throwing this party. Java’s lingering around, but he’s staying in his seat and watching as the others pull the reluctant Cocoa on to the dance floor. She’s out there trying, but you can tell she’s a little bit uncomfortable. Not really ready to come out of her shell yet. You look on while the party’s still hot and raging, and each of the flavor’s dancing are clearly looking for your attention. They share the dance floor, but not in unison. This isn’t the electric slide, they’re each trying to out do the other. Once the party’s died down a bit and someone opened up the windows and started to cool everything off, things really start to get weird. Someone else steps on the floor and approaches you. As you savor the scene and really drink it in, you realize you must be too foggy. You’re too tired, and the party has died down to lukewarm, that’s the only answer for it. Is that..no. Ba..Ba…Banana? No, no one invited Banana did they? Suddenly you realize it’s just Almond, Yogurt, and Milk playing tricks on you. They’d probably have you questioning your own sanity if you weren’t sure you lost it quite some time ago.

Next time around you won’t just ask for a lift and stumble in unprepared. It’s time you bought the ticket for this runaway ride and settle in for the long haul.

Hrmm… this almost started to sound like a spirit quest. Is Latte your totem animal?

Heh, hardly. Sleep deprivation tends to hit me in cycles. That was the first rambling loopy section. I hit the exhausted “would crash on this floor if I weren’t at work stage” about 4 hours ago, then the second wind, and I’ll be coming up on loopy again soon.

Infusion 3. Really light. Should have stopped at 2:( I really wish the coffee beans were as big in the tea as they are in the pic.:( Since the 3rd infusion is pretty weak, it’s a good tea for a person who likes just a cup or two of coffee in the morning before moving on to something else because you don’t have to work about wasting endless infusions just to switch teas.

Boiling 7 min, 0 sec
Yours I Like This
2 likes
0 comments
Edit