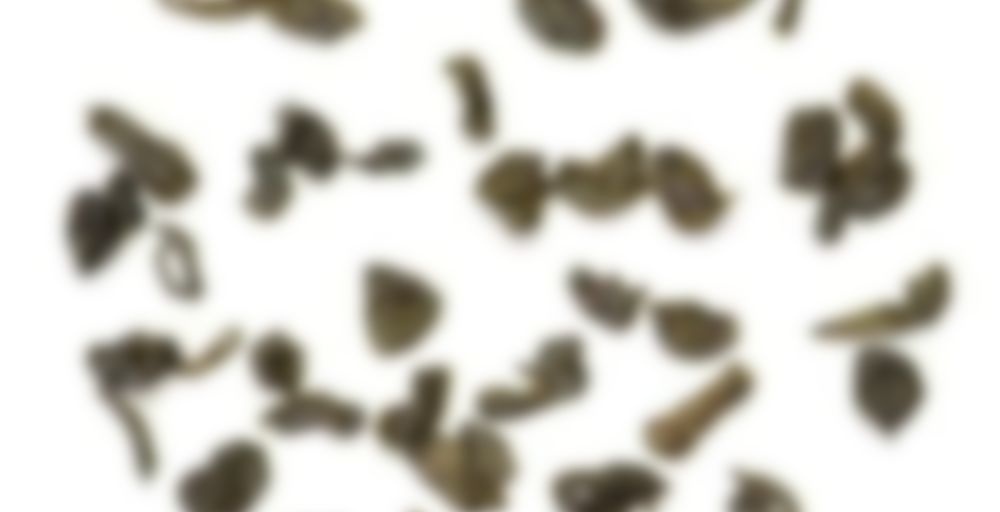 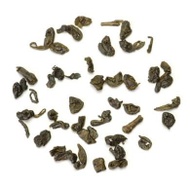 Organic Gunpowder green tea is traditionally created by plucking high grade long tea leaves from the tea trees, by hand-rolling them into small tight pellet shapes (also like discoid flower). It is normal that there will be some floating in the liquor because of the processing craftsmanship, which will not affect tea taste. The whole leaf is used in processing, so this tea when brewed allows the pellets to unfurl and dance in the hot water to produce a beautiful yellowish green, even golden color liquor with high aroma, fresh and brisk taste, with hint of caramel aftertaste lingers.

This was one of my most recent sipdowns. I finished the last of what I had of this tea last night. As the previous reviewer noted, the tea pellets were not as tightly rolled as one would expect from a tea of this type, looking a little more like small snails than round balls. As Chinese gunpowder green teas go, this one was a good bit quirkier, more likable, and more complex than most, but it was still by no means a truly spectacular offering.

I prepared this tea gongfu style. Teavivre recommended a water temperature of 194 F for this tea, but I tend to be more comfortable brewing Chinese green teas under 190 F, so I opted to use 185 F water for the entirety of the session. After rinsing 7 grams of loose tea pellets in 5 ounces of 185 F water, I started my session off with a 5 second infusion. Fourteen additional infusions followed. Steep times for these infusions were 7 seconds, 9 seconds, 12 seconds, 16 seconds, 20 seconds, 25 seconds, 30 seconds, 40 seconds, 50 seconds, 1 minute, 1 minute 15 seconds, 1 minute 30 seconds, 2 minutes, and 3 minutes.

Prior to the rinse, the dry pellets emitted aromas of cooked cabbage, straw, hay, roasted carrot, smoke, char, and honey. After the rinse, I noted new aromas of spinach and peas. The first infusion introduced a subtle grass scent. In the mouth, the tea liquor presented notes of hay, straw, grass, spinach, peas, cooked cabbage, smoke, and roasted carrot that were chased by hints of honey, lemon, and caramel. The subsequent infusions introduced aromas of cooked green beans, butter, and green olive. Stronger lemon notes appeared in the mouth along with belatedly emerging char hints. New impressions of minerals, butter, seaweed, cooked green beans, roasted barley, and green olive also appeared alongside hints of malt and wood. By the end of the review session, I was still able to detect subtle impressions of minerals, spinach, grass, and seaweed that were backed by fleeting honey, straw, roasted carrot, and cooked cabbage hints.

This was a pretty solid gunpowder green tea. It was a bit rough around the edges (some fairly pronounced astringency here and there), but overall, it was a likable tea. Gunpowder green teas are rarely ever super high end and are mostly just intended to be regular drinking teas anyway, so it is not really fair to expect them to compare to higher end Chinese green teas. For what this was, it was pretty good. I would imagine that fans of such teas would find it rather enjoyable.

These tea “balls” are not as tightly rolled as most I’ve seen in the past. Closer to the snail like shape of other varieties.

The color is a medium-straw and flavor is mild, smooth, and slightly smoky without an aftertaste. It doesn’t have any qualities that make me prefer it over others, but it isn’t bad either.