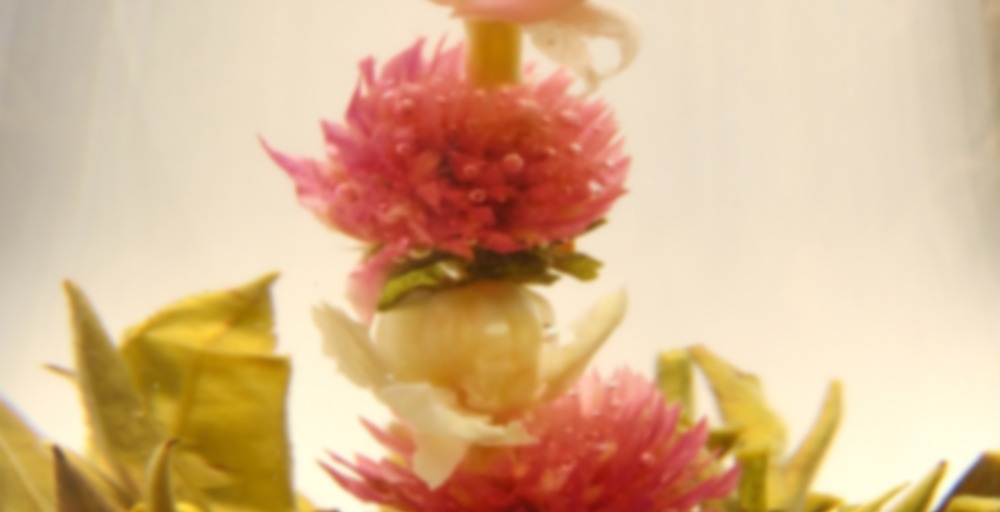 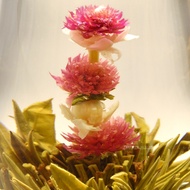 This attractive flower tea (blooming tea) have a great name Rising Steadily. When brewed, it unveils higher and higher in the water. The aroma is rich and refreshing, the taste is with strong and fragrance long-lasting. You will be able to smell the nature mellow of the tea and flower with an enjoyment. It is really a sumptuous spectacle for your tongue and for your eyeballs!

Watching this tea bloom was a feast for the eyes. Using boiling water, the bulb slowly bounces around the vessel for a bit before gracefully sinking to the bottom to allow the beautiful flower structure to fully unfurl. It’s pretty tall so you want to use a large enough glass or teapot.

The flowers here are supposed to be amaranth and jasmine. I couldn’t taste the jasmine at all, but the amaranth dominated. The flavor of this tea is sweet, nectary, and honey like. There’s no bitterness to speak of even at boiling, a problem I’ve had with other blooming teas. But I didn’t really care for the resin like taste of the amaranth.

I won this tea among a selection of flowering teas from TeaVivre in a contest. I haven’t been the greatest fan of flowering teas in the past because I’ve been unlucky enough to select poorly made and/or flavored ones when I’ve given them a chance. It’s also highly likely that when I made them before, I didn’t understand that I was supposed to use cooler water for the white tea.

So off I embark on this journey of rediscovering flowering teas!

Using boiled water that cooled for about 3-4 minutes before pouring, I allowed the tea to steep in an open-topped, clear glass pitcher until it had fully opened and rested on the bottom of the pitcher. This took about 4-5 minutes.

The resulting liquor has a clear, bright, caramel hue with a hint of rosiness. The aroma is soft, lightly springy like a freshly mown lawn, but with that hint of dried grass from the leavings of a day or two earlier.

The flavor is fuller than I expected. It rounds out the aroma nicely with a surprisingly creamy texture and warm taste. Perhaps a hint of caramel, but I’m having trouble putting my finger on exactly what’s going on there.

It’s not my absolute favorite flavor, but I can definitely see myself enjoying this tea on a nice spring morning on the patio.