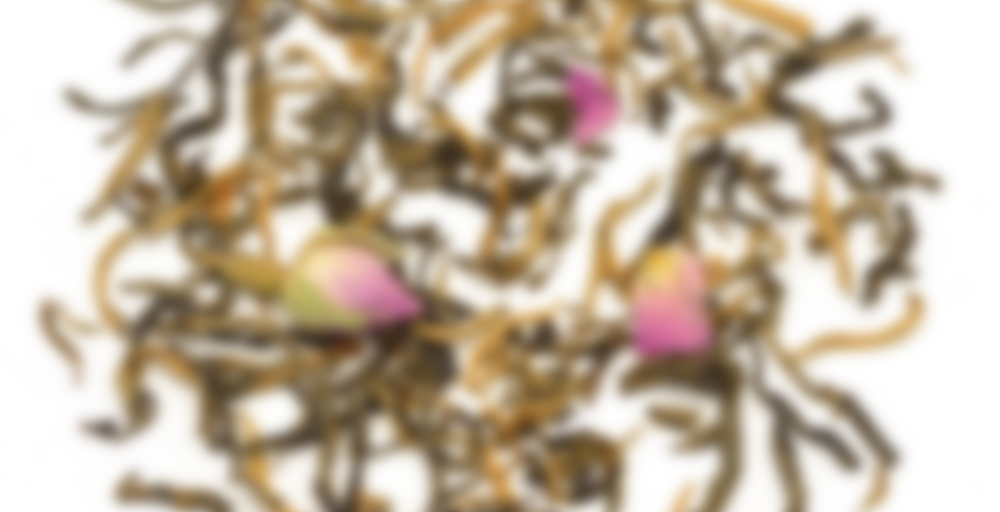 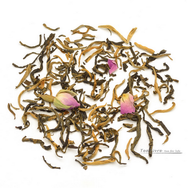 with 31 Ratings Rate this tea Rate This Tea

Taste: It has strong rose fragrance, companioned by the sweet flavor of Dian Hong.

Health Benefits: Black teas contain antioxidants, which help in the prevention of some cancers and help reduce the affects of aging that is caused by free radicals. They can also reduce the risk of strokes and heart attacks due to natural chemicals that reduce cholesterol.

I went to fix myself this tea this morning and realized I had TWO cups’ worth left, not just one like I thought. This morning I put the tea through my accidental “steep it way longer than 5 minutes” test that seems to be becoming a trend…

It’s still great, and if anything, the longer steep time brings out the rose flavor. I’m upping the numbers on this. Anywhere below 95 is just not accurate anymore.

If I get one Teavivre tea in my splurge, it’ll be this. This is one of the rare teas I can’t get over my awe of.

…I did place my first Butiki order last night too.

This was my 2nd ‘long hot bath’ tea, because face it, one cup of tea is not enough! Lovely rose black, gentle & soothing. Just the right amount of rose, & yes, there was a sweet full rosebud floating in my steeper basket. I steeped 2 minutes, with a resteep of 3. The 2nd cup features more rose flavor, actually!

Great minds think alike – except no tub time for me this afternoon.

Ah, I’ll be sure to get two steeps out of this one when I get to my samples.

I can’t believe that I’m still the only person who has reviewed this tea. I guess it’s still pretty new! I had a cup of this earlier, this time my water was for sure fine. The tea did turn out a bit fuller and more nuanced than last time. Incidentally I used half my sample pouch in a 12oz mug, and brewed at the recommended temp.

This is quite a nicely done scented tea, as I would expect from Teavivre. It’s also been done with a deft hand; the rose is subtle but present enough that you know you are drinking a rose tea. But really it is more like a pleasant accompaniment to the dian hong. The dian hong is on the earthy side of things, with light notes of sweet potato. The whole cup was slightly sweet from the dian hong. For me, I tend to favor the not-so-earthy dian hongs, so the black base totally my style, but it is a lovely tea nonetheless. I will definitely enjoy the rest of my sample pouches.

I’ve noticed this tea a few times on their site, will probably order some sooner or later…haven’t met a rose tea I didnt like, especially iced.

One of the most sweet potato-y dian hongs I’ve tried was Teavivre’s Dian Hong Golden Tip. Quite sweet and delicious! It would be a good one to try out.

Will do, I see they offer samples!

Waking up so early is starting to take its toll on me. I drank green tea all morning because I was awake. Chugged a Mtn Dew with lunch but it has since faded. I need go-go juice. Reached in the drawer for a Yunnan, came out with this one. Finished off the sample. I leafed a little heavier than my normal. The result is a little more rose than I noted the first time. As soon as the cup cooled the rose faded some allowing the glorious Dian Hong to rise up and give me the boost I needed to make it through the afternoon. A very nice rose black tea.

Heh, Mountain Dew. Do you have Ski in your area of Indiana?

I have seen it but not tried it. Mellow Yellow is OK but its too easy to chug.

You could do what Honey Boo Boo does and mix pixie stix in red bull and chug that! Ha ha. (I take no responsibility for you actions after you drink that though) :P

Ski is like a THING in my corner of Indiana for some reason. And Grippos, ha!

Thank you Teavivre for this sample. One of my favourite teas is your Dian Hong Golden Tip and I couldn’t imagine it being any more perfect…then you released Dian Hong with rose and the sheer thought has blown my mind. I love rose teas that are done well and are natural.

This loose tea does not have full roses as in the picture shown, or at least my sample bag didn’t have any. I do see one or two pieces of yellow/pink petals and it certainly has that sweet rose scent. The Dian Hong gives the rose a musk like quality and depth, it smells super delicious.

Once steeped this tea is golden brown in colour with a sweet and earthy rose scent. So very fresh and soft, it’s similar to pure rose oil.

Flavour is light and malty with fruity tones to begin with and then it transforms into a sweet and delicate rose flavour that carries on throughout the after taste. It is exactly as I imagined Dian Hong and roses would taste like together and it truly did not disappoint.

I will be adding this to my must buy list to alternate with original Dian Hong. Great for those pick me up moments :)

Update: I just visited Teavivre to add this to my shopping list and it appears that they are either out of stock or no longer sell this any more :( Super Sad Kitty.

What? Hopefully just out of stock! You made it sounds so awesome, plus I occasionally enjoy some roses in my tea (sorry sil, I really do ;)

Thank you Teavivre for this sample tea!

When you open the silver packet of tea, the rose fragrance is potent…released as it should be from a properly sealed container (which Teavivre does so well with much care).

The rose scent can be a bit off-putting. Even I was wary…and in my mind I spoke to myself “Oh no, a perfumy tea!” But I was wrong.

I had Eric brew some up (I tried it first at home and was excited for his reaction at the tea shop). He said out loud what I had thought when he put his nose down into the dry leaves…“A perfumy rose tea!” And when he sipped the tea, “Huh, it doesn’t taste strong rose, in fact this is really good!”, said he.

George lumbered behind the bar…with his “Watcha drinkin”, rinsed out a cup and poured from the gaiwan after sniffing and saying the third “Oh wow ROSE!”…then “Huh?…this isn’t strong like I thought, it tastes Yunnan Black, really good, almost Golden Monkey.” And off he went out the door. (He owns the shop)

I like having other opinions after I’ve made my own. Makes me chuckle to see other people have the same reaction…like I have a secret that I’m springing on them.

My Black Tea loving friends are thumbs up on this rose tea. I think it’s the best Rose Black I’ve had too.

Very, very fragrant aroma…lovely not icky strong scent that fools one into thinking the taste will follow and be rose too but it doesn’t go there.
The flavor is hearty with a HINT of floral not a bouquet just the way it should be. Plenty of body and robust flavor in the tea. Not girly, fru-fru or tea-party-only tea.

I’d share this with a man (if I could find one).

This was a free sample from Teavivre with my last order.

I was pleasantly surprised by this tea. I have tried the Dian Hong before and liked it. I was a little suspicious of rose because other rose teas I have had have been very perfumey.

Upon opening the package there are pretty little light pink rose buds mixed in with the Dian Hong. It smells pleasantly like natural rose buds (I have many rose bushes in my garden and I love the smelle of the blooming rose buds in the early summer!). It is not perfumey rose like the perfume my grandma used to wear.

I only brewed for one minute because I still had the fear that the rose would be too strong. It tastes delicious and delicate. I get the taste of the Dian Hong tea, it is smooth but moderately bold, slightly earthy, slightly malty. It is perfectly balanced with the slightest rose flavour, slightly floral but not too much and certainly not perfumey. The rose really lightens the black tea. This would be a perfect afternoon tea or a tea when you are just winding down. I think this one would have been just fine had I brewed for my usual 2 minutes.

The rose fragrance of this tea is come from natural rose buds, mixing the rose with Dian Hong black tea produces this pleasing Rose Black Tea.

My first steep brewed up with a subtle chocolate flavor that was surprisingly sweet and lacked any astringency. The chocolatey flavor really helped satisfy the chocolate cravings that I’ve been having all day. Towards the end of each sip I started to pick up hints of malt and rose. I was a bit disappointed that the rose wasn’t more distinctive in the first steep, because by my second I could hardly taste it. The more malty flavors of the Dian Hong obscured the rose as they began to develop more. There is still a slight sweetness to the second steep, but it doesn’t stand out nearly as much as it did previously.

Come check out the full review on my blog:
http://www.notstarvingyet.com/index/2013/10/29/tuesday-tea-rose-dian-hong-black-tea-teavivre.html

The first thing that I noticed when I opened up the package was the rose aroma. As i measured my tea i got full roses which was quite exciting to see. So i went to brewing the first time it was too light in taste & the aroma of roses was a bit much. The other time around i had it brew too strong & came out bitter. Maybe i should give this tea another test but from this time i didn’t enjoy it.

Thanks Angel for a free sample with my recent order. Dry it smells like chocolate and rose, very subtle rose. brewed its chocolatey rosey, more chocolate.sweet taste, some grain flavor like rye. as it became cooler flavors became more pronounced and sweet. i enjoyed it a lot. on my shopping list