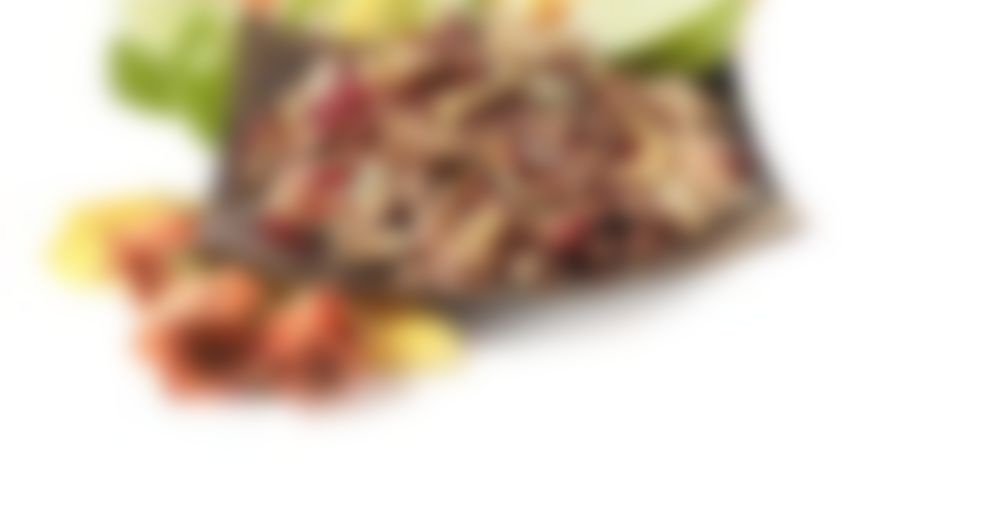 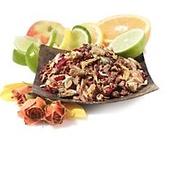 Sit back and let your taste buds transport you to glistening white beaches with invigorating ocean breezes. Refreshing citrus plays with sweet apple, while relaxing floral tones lift away your troubles. This tea is caffeine-free.

This is a June tea of the month on the classic plan. I’ve now had several green rooibos blends from Teavana, all of which were successful in not tasting of rooibos. This one should be interesting. I noticed when I first opened it up that it appears to be a hybrid of a rooibos and a fruit blend. It has the ginormous chunky fruit pieces I’ve seen in Teavana fruit blends before (but not in rooibos) mixed in with the green, needly rooibos.

The flavor is, expectedly, limey. I get what Soccer Mom was saying about the apple, but in my first tasting it isn’t strong at all. I may have lucked out and spooned in mixture that wasn’t heavy on the apple chunks for my first brew. Mostly, I get a fairly mellow lime that isn’t tart, and isn’t really sweet either (though I think that’s the apple’s role, to make the lime not tart). It’s nowhere near as strong as the Numi Desert Lime, which is, frankly, a good thing.

I wouldn’t have picked this to try absent my tea ‘o the month membership, and it’s not the sort of thing I’ll seek out even after tasting it, but I’m glad I got a chance to try it and I’ll be happy enough drinking it on hot summer evenings when it’s too late for caffeine until my spoon goes clink at the bottom of the tin. It’s not at all rooibossy, which is, after all, the main criterion of a decent rooibos if you’re me.

BTW, tough day today. Learned of two deaths within 30 minutes this morning before work, one of someone only 5 years older than I am who was a sort of mentor to me. So I’m in a funk at the moment.

hugs i’m sorry for all the sad news

I’m sorry that you’ve had a really rough day. :(

Thanks. :-) I’m a little worried, as these things tend to come in threes…

sorry for all of the sad news. sending hugs your way!

Though Limeade is a good one, but Raspberry Riot Lemon Mate Tea and Strawberry Lemonade, Lemon Youkou and Wild Orange Blossom even more amazing. They makes great iced teas….www.teavana.com

This was a gift from SoccerMom.

Having it hot tasted like a potentially god drink, but a little off. It was floral, I don’t want flowers in my limeade.

Trying to find some flavored iced teas that my family will like (and agree upon) this is not going to be an easy task!

So I decided to start with a rooibos seems like a good start especially with it being allergy season. Made this according to the Teavana iced tea instructions and poured it over ice. It smells like lime mixed with apples and I want LIME not apples :(! I don’t mind apples but I don’t want apple mixed with my lime.

Loved this one. Can’t wait to use it as an iced tea when the weather warms up. Nice, sweet lime flavor. Not overpowering, and not too sweet either.

Had this iced with a bit of mint and club soda. WOW. Tastes like a fruity tropical fizz you’d only find in specialty markets stateside. The lime is present, but not overpowering. It’s subtle and warm. Would probably be great hot with honey and lemon.

This tea smells like a sunrise looks. Fruity teas aren’t even my favorite, this one just has all sorts of awesome things going on. I get so engrossed just shaking the tin and wafting the aroma around, haha! Anyway, the citrus makes me energized in the morning, so I guess I will be relying on this next semester before 8:30 chemistry class. :) Brewed this by the directions given, turned out perfect.

I made a whole pitcher of this, and cold steeped this tea does nothing for me.

The lime is too sour and it’s more floral than limeade should be, which makes the whole thing feel off.

Luckily I have some lemonade singles (you know the kind you dump into a water bottle and shake up?) that once added to the cup make a pretty decent limeade. It’s tarter than lemonade and the florals are choked out, so I can thankfully get through this pitcher, because I was really doubting it there for a minute.