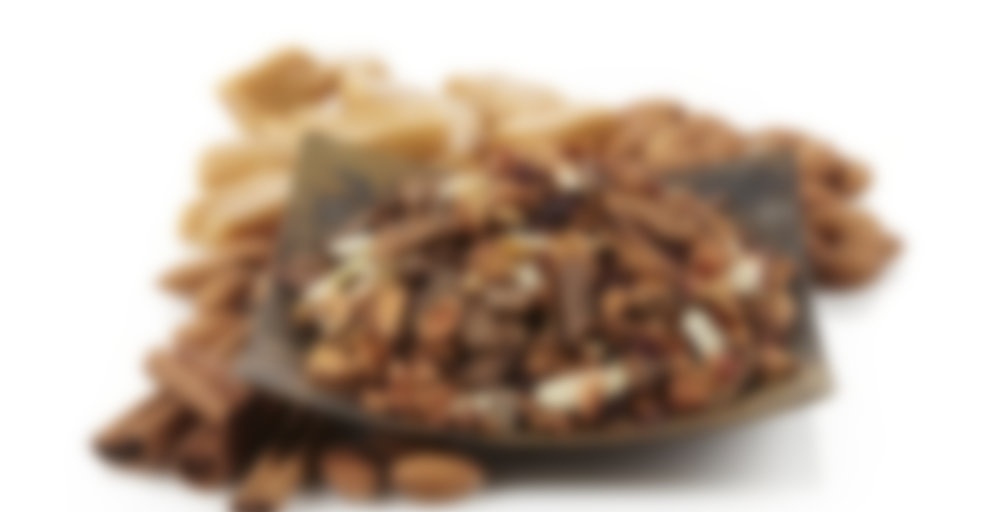 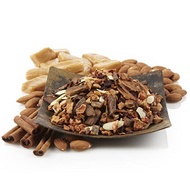 with 71 Ratings Rate this tea Rate This Tea

Sweet candied apple and coconut with notes of caramel and cinnamon

This amazing herbal blend combines sweet cinnamon with a rich caramel flavor. Delicious notes of roasted candied almonds are sure to put anyone in a warm mood.

I went into Teavana looking for the Swiss Vervaine, and I managed to snag the last pound of it that my store had. Success! I’m really sad to see that one go – I can see why it might not have sold well, but it was definitely my go-to sick tea. I wanted to smell the CocoCaramel Sea Salt, because it just sounded so weird, but they were all out of that one for the holidays, so the associate asked if I wanted to smell this one instead. Sure, why not.

It smelled good, so I got 2oz of it and took it home. I finally got around to brewing it – and there’s hibiscus.

I don’t smell it, I don’t really taste it, but in a blend that is so almondy and caramelly, it’s downright bizarre that the drink is pink. On top of that, I had a feeling that this would be best with milk, so now it looks like Pepto-Bismol. If I don’t look at the tea while I drink it, it tastes good. But I just can’t get past the pink liquor. It’s like green ketchup. I can’t do it.

Edit I was lazy and didn’t actually look at the ingredients… Turns out its not The Hib at all. It makes sense. It’s beetroot pieces. Still weirdly pink though.

It took me years to learn to like salsa verde for the very same reason!

Get a dark mug so you can’t tell?

It certainly sounds interesting, though.

I love Swiss Vervaine and I too was sorry to see it go! I’m glad I stocked up. I’ve made THIS tea several times and it’s not always pink; I guess it depends on what bits of stuff end up in the brew. I really do like it, though. I have taken it to cat shows and now a few friends are hooked on it. There’s a new one for spring, BERRY Almond Amaretti. I’ll try that one too, eventually.

I’d like to thank DAVIDsTEA for creating this blend. Yes this is from Teavana but apparently its the same exact tea as Forever nuts. I’ve never had Forever Nuts and I guess I can say now I have!

Brewed this yesterday in my new cast iron green teapot that my boyfriend got me for our 8th anniversary yesterday, I LOVE it. http://instagr.am/p/RN18MMLPLV/ have to take better pic soon.
The tea is pretty and pink and of course we had to add some almond milk for fun. The smell of the tea is so sweet and I just couldn’t place what it reminded me of. He kept saying cinnamon toast crunch, which has to be my all time favorite cereal, but I wasn’t so sure that the tea smelled like it. Perhaps because it was hot…

Anyway we drank it and it tasted like happiness and it will remind me of our awesome day together. :)

EDIT: So after getting home and sniffing the leftover tea from yesterday, and now that its cooled, it does smell like CINNAMON TOAST CRUNCH! I am in love.

That is a pretty tea pot!

:) I love the pour on it! no dripping like my other tea pots.

That pot is gorgeous. Where is it from?

I do have to disagree with the naming of this. I really don’t taste the caramel here. The main characters are almond and cinnamon.

Like others have said this is very close to DT’s Forever Nuts in both smell and taste. It does taste a little more cinnamon-y to me though. Teavana’s version is just a tad more expensive (like $.00576856 more per gram) – kind of a wash really. :)

I love the pink hue this brews up! And the smell reminds me of passing by a kiosk in the mall selling those sweet, roasted almonds in a paper cone! Mmmmmmmm!

someone else said this and it’s true, this is basically Forever Nuts from David’s Tea. which is a very popular tea. too sweet for me to really enjoy, but if offered i will always say yet to a cup.
herbal caramel teas always seem to do okay by be.

Hooray! A tea from Teavana I actually like! But…like others have said, it tastes exactly like Forever Nuts from DAVIDsTEA…only it has more extras for visual appeal, and probably to make the tea heavier by weight.

I had an opportunity to smell this one in-store. The scent strongly resembles Forever Nuts by David’s Tea.

This… is Forever Nuts from David’s Tea. No, actually. Same ingredients, same exact flavor.
So obviously this tea is DELICIOUS, but I’m wondering how they got away with this… lol! Coincidence?
Anyway, like Forever Nuts, steep this tea twice as long as recommended. It’s yummy!

I am told this is actually a blend from Teaopia that Teavana is keeping just for the season. So if there was stealing done, it was done by Teaopia. Not that I am defending Teavana.

Nope, Teaopia didn’t have this tea or anything remotely similar.
Caramel Almond Amaretti is one of Teavana’s 17 new “Global Treasures” teas, which is company wide in the USA as well. The Teaopia teas are only being kept in Canada.

Hmm okay my informant must have misinformed. Can you confirm whether the twelve blends they have included in this set are Teopia teas? http://www.teavana.com/tea-gift-center/tea-gift-sets/p/12-holidays-of-tea-gift-set

And of course I just now saw your bio ;) Did you stay on for the change over?

Thanks ;) My friend Michelle told me that Rob was talking out his behind when he said the Amaretti and gift set were from Teopia. He likes to make it seem he know’s what’s going on and I suppose I made it seem like I did too, so I apologize.

my, this is delicious. i had a cup of this as my (post) midnight snack along with roasted sunflower seeds, tamari almonds & toast. i don’t normally have a midnight snack per se, but i’m a night owl, and owls must keep the midnight oil burning..

yummy and soothing. warm apple pie. very apple-y and cinnamon-y. love the smell of this stuff and i could inhale the tin for days!!

i used 2 tablespoons (LOL) in a Melitta tea filter and let infuse for 10 minutes along with a bag of Tazo Awake English Breakfast. that seems to be the tea of choice for mixing with flavored teas today! first Wild Chaild, now this. i also have some Ahmad’s English Breakfast (pretty much a CTC) that i also could have used but i usually save that for when i make chai.

anyway, after the long bath of steeping, i added milk & sugar and it was truly delicious. i don’t think i’ve ever tried this plain. since it’s an herbal & a bit on the fruity side, taste-wise, i like to add black tea to give it depth, and milk and sugar naturally draw out and enhance the almond and cinnamon pie-like flavors.

also- it really helped that i added much more than the recommended amount of 1.5 tsp because the flavor really came out. very pleased with this cup. drinking my second infusion now!

i’ve had this since November 2012 so i better get a move on and head toward sipdown territory, as i don’t want it to lose its aroma or flavor. plus, it’ll give me an excuse to go out and buy more ;)

Who had this idea first, DavidsTea or Teavana? I’m wondering because Caramel Almond Amaretti is very similar to Forever Nuts: right down to the fluorescent red color imparted by beetroot. I gather that the color of this almond-centric hot beverage would otherwise be repulsive? Why else would this color be added to this flavor? Is beetroot the only thing (aside from Red Dye No 5) capable of covering it up?

Unsurprisingly, I don’t like this flavored-water beverage very much either. Almonds are present and accounted for, but I don’t really detect much in the way of caramel or amaretto. I ground up the dried chunks of stuff in a coffee grinder to make sure that the flavors of the natural ingredients would be well represented and not overwhelmed by the artificial flavor. It still tastes weak and reminds me of a holiday version of Vitamin Water.

Has anyone tried infusing this in milk (regular or soy or almond), and boiling it on the stove? Are people adding sweeteners? I don’t know. What’s really missing here is tea. I might try mixing this with some Assam CTC…

Boiling 7 min, 0 sec
Yours I Like This
4 likes
0 comments
Edit

Sample from chrimabro (Thanks, Christina!)

This smelled amazing. I was utterly in love at first sniff. Per Christina’s suggestion, I brewed my mug with a teaspoon of sugar. This is DEE-licious. The flavors all mingle together nicely. The almond and cinnamon are definitely the strongest. I can’t even taste caramel, which isn’t a big deal since I love almond and cinnamon.

Reading some of the other notes, I may have to try the Forever Nuts blend from David’s Tea to compare.

A nice dessert tea to unwind at the end of the day.