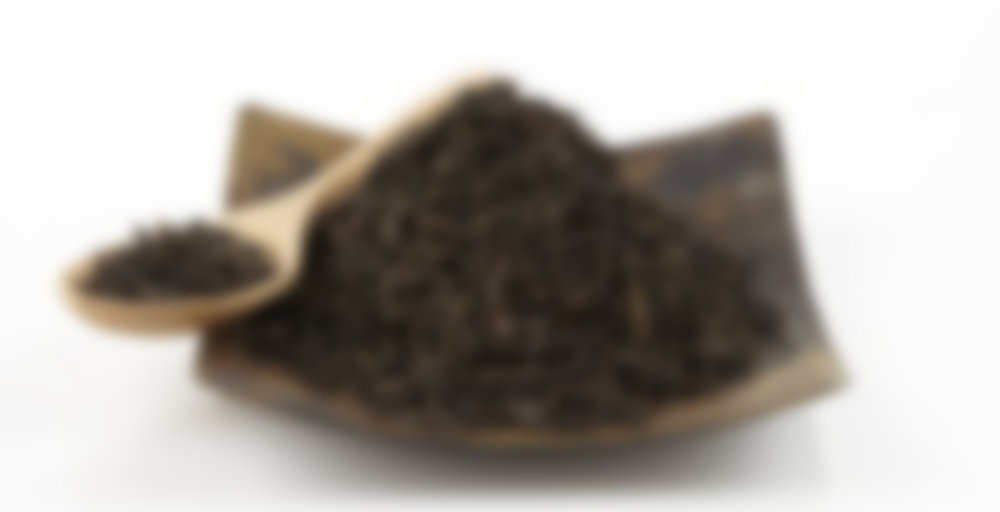 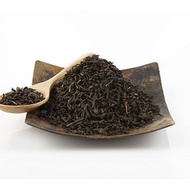 Robust but elegant earthy notes with a smooth and mellow, sweet finish.

Legend has it that pu-erh black tea was made famous given as a dowry by Chinese Princess Wencheng in 641AD. Subsequently, Emperor Daoguang granted pu-erh as the ‘Divine Tribute to the Kingdom of Heaven’ and was considered a tribute tea in 1839AD. After drying, the tea undergoes and additional fermentation process, which activates enzymes and provides and elegant earthy flavor. Ours is a rich loose-leaf pu-erh carefully blended with a high-grade Yunnan black tea. Well- balanced, smooth and mellow, the cup finishes with a noble floral note.

I’m resteeping my second cup of this now. I have so much tea that I’d like to drink and enjoy, but I also don’t want to waste the stuff that I have.

So, I’m going to resteep this at least once!

It tasted much like I expected: warm yunnan notes balanced against a bit of earthiness. And, for some reason, I get a touch of smoke at the end of the sip. I really enjoy Yunnans so it was nice to try this as I’m trying to get used to unflavoured puerh. I’m not sure I would buy more of this as I prefer Yunnans but it’s nice to mix things up, and I wouldn’t say no to a cuppa.

Thanks JustJames for giving me such a generous sample! I’ve got several cups (+resteeps!) of this to look forward to!

This is one of the very first tea’s I bought when I began my tea journey. I was ‘talked into’ 150 g’s of this, and now I’m down to my last cup of it.

I wasn’t too impressed with the tea when I first tried it, I thought it was a little boring; but that’s because my friend, who started me on this tea journey had purchased me 2 flavoured tea’s that I adored.

Now a few months into my tea experience, I can appreciate the subtle nuttiness that flavours this tea. It is a smooth with a light earthy flavour. I don’t recall having this tea ever going bitter when steeped a little too long. It steeps really twice, and sometimes I got 3 steeps out of it if I was careful with brew times.

2/3/14 2nd tea of an afternoon pu-erh flight. 3g/100ml gaiwan/212F Washed. The dry leaf had a delicate cinnamon raisin scent which I associate with Yunnan black teas. After the wash there a richer wet leather aroma – the pu-erh in the blend coming out, I think. The brewed tea was very Yunnan black – pleasantly tannic and astringent, with a low key earthiness from the pu-erh. A bit of vanilla turned up in the scent and very faintly in the taste on the second steep. I might recommend this to someone who I knew loved Yunnan teas and was put off by the intensity of straight pu-erhs.

I know I just added a tasting note for this tea, but it’s my morning tea. Anyway, I slept very poorly last night, like I laid awake in bed for hours, and I woke up at noon today to—snow. I’m not used to snow, and I was extremely startled.

Anyway, the tasting story goes like this: I decided I’d try to change the way I brew this a bit. Since I prefer the second steeping of this tea to the first, I decided I would try washing this tea with 4 ounces of boiling water before I brewed it. The tea tasted so different. I was really surprised. I still brewed the tea at 190 for 3 minutes.

The smokey notes of this tea came out and covered the bright taste of the original tea. I suppose the Pu-erh notes came through with this steeping. The tea was still very good, but instead of being well rounded and mellow, it became smokey and soft.

But, you are probably asking, how did the mythical second steeping taste? Disappointing. All the complexity of the cup left, and I ended up with the most generic tasting black tea ever.

This was an interesting experiment. I won’t be rinsing this tea again.

teavana is not known for longevity. i think was my first puerh…. i used to use it as a base for other things. i’d layer all sorts of things on top of it.

simply, this is a beautiful tea. puerh is a daily ritual for me…

this golden version is not as heavy as a black, with a vague nutty flavour that comes with a puerh. it is elegant on its own and great as the base if you like to mix and match. i like it both ways and have yet to find a herbal that it doesn’t compliment. teavana’s azteca fire is a great combination if you like some spice with your morning caffeine!

the higher the brew temp, the stronger the taste, but i haven’t had it go bitter on me yet… impressive!

This is the first pu’erh I’ve ever tried. My initial impression is mixed, but overall positive. The aroma is aged and earthy, and the flavour is earthy, suggesting mushroom or root. It has a warm, dark body, and a very slightly tannic finish. It’s not something I’d drink all the time, but it’s certainly worth trying.

A quick wash and a long steep is all this one needs. Very rich, earthy, and has a great creamy aftertaste.

This is the first Teavana tea that I really enjoyed. Thanks to madametj for this one! I did a 20 second rinse. I learned why there is a rinse the hard way by drinking one of WP’s puer rinses. I was trying “to get my money’s worth.” LOL.

And after a few tries of drinking ripe Puer, I find myself enjoying it! It wasn’t my cup of tea at first, and I still have a long way to go in my enjoyment and understanding of ripe, but I’m getting there.

I’m not sure of the age on this tea, so my review will differ from others. This has no fishy taste, thankfully. The primary flavor is an earthy moss. It’s very sweet and smooth. The first steep was very malty and had a slight mollasses taste. The second steep has a bit of smoke and is less malty. The third steep was much like the second. I leave my note at that. I’ll finish the rest of the tea in the next couple of days.

The taste comes off alright, though I think I’d rather have the pu-erh or the Yunnan Black separated. The tea blend seems like a perfect fit for a first cup of the day; if not for one small issue I have- one steep only! Sure there are plenty teas that are good for only one infusion, but a single steep pu-erh? A single steep Yunnan black? I don’t think so… how is it that combining two fantastic teas, somehow lessens it’s versatility?

But for what it is, it’s pretty nice.

I did. I went into a Teavana for the first time today. Up til now I’ve been a Teavana virgin but not anymore! Chose this tea even though it looked dirty in the can because nothing else interested me much. The brew took so long, even though I know to expect that, but it is tough to see a long brew of a leaf meant for flash steeps.

The tea had a red brew and a bit of a Lipton taste, but also something sweet that isn’t in the tea. Maybe the tea ware used to brew it had some residue of a previous brew. I tasted rubber band aids.

Oh well, it was a diverting experience to finally go to one of these shops. They have some rather scientific looking tea brewing devices, but I am still just a simple girl.

Posted a photo on my blog, as gamers always say “pic, or it didn’t happen.”

Teavana does not do puerh well. Its as if they try to go out of their way to find the worst puerh. They do flavored whites very well.

I tried teavana once and ordered this exact same tea. I agree it tastes like lipton or some standard black tea. I looked it up and turns out it is a pu erh blend mixed with black tea. The whole 90 second steep thing bothered me too, but it was to be expected. They really shouldn’t call this pu erh IMO.

The girl was steeping several teas, the steep was more like 3 minutes.