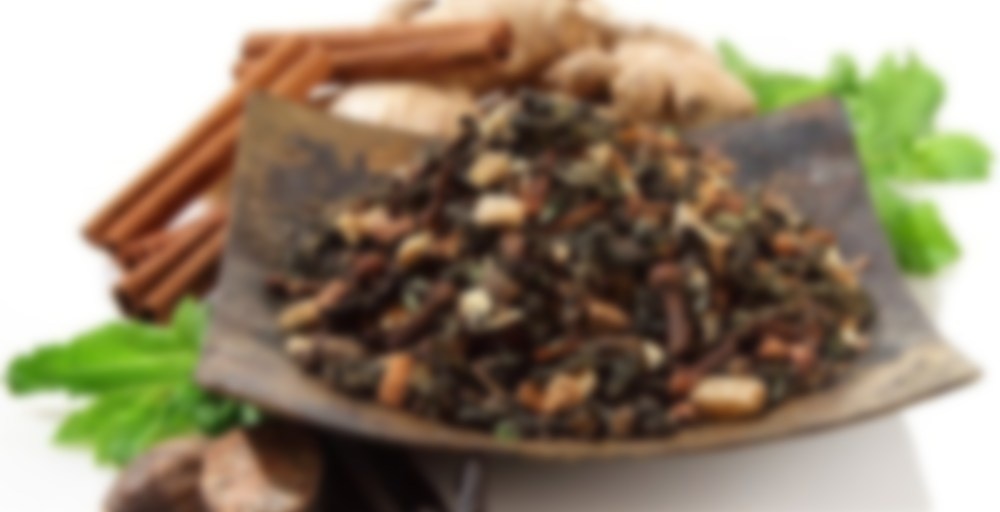 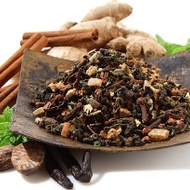 Description
Enjoy a private concert of flavors as lively spices harmonize in a symphony of flavor. This oolong and pu-erh tea blend is created from the famed Quatre Epices of France with a Teavana twist. Piquant notes sing of cloves, nutmeg, ginger and sweet cinnamon while black peppercorn, Madagascar vanilla and peppermint warm and awaken your palate for a refreshing crescendo.

Sweet cinnamon and clove with a mild heat from ginger and pepper are finishedby smooth vanilla and mint.

Tea Benefits
As a part of a diet, may help promote a healthy metabolism
May help support digestion
May help support healthy skin & teeth
Features Ayurvedic spices cinnamon, pepper, ginger & cloves
Rich vanilla is sweet and soothing
Contains 10-15% of the caffeine in a cup of coffee

I was doing some Christmas shopping with my daughter last night and decided to check out the store and grab a cup. Well of course I walked out with something because my daughter tried the blueberry bliss/strawberry lemonade combo and loved it. I figure get her started early. She also refers to it as her tea. This one intrigued me last time I was in so I thought why not. The dry leaves on this one are an intricate combo of spicyness. I was really getting excited to try it. First sip….wow! If you put a cinnamon, peppermint and ginger Altoid on your tongue at the same time you would get this tea. Not to mention the subtle sweetness of vanilla, a little more spice with the black pepper and clove, and that it’s an Oolong/Pu-Erh combo….This maybe the first tea that I can legitimately claim teagasm on. This tea was so amazing. I left the cup in the car overnight and a heavenly aroma still hung in the air! And I’m spent http://www.youtube.com/watch?v=-KCE44Jz7BQ&feature=related

I really enjoyed this one too!

ooh, I may get some…

This sounds interesting. I only just discovered a couple of days ago that you can buy a cup of ready to drink tea at Teavana. I may take advantage of that next week when I go to “the city.”

It is good. Sadly they stop serving to go cups of tea during the holiday season. At least they do at my local Teavana.

What? No to go…that’s not cool

I’m not sure if it is at all of their stores. But mine served their last to go the day before Thanksgiving and they won’t offer it again until after the new year. :(

I think I have found that magic blend. Teavana is always promoting blending teas, because supposedly some teas were “meant to go together”… whatever. I just like that I can tailor the taste of my tea to my moods, and sometimes I’m in the mood for something familiar, yet new. Anyway, I’ve been trying several blends (mostly just with Teavana teas, as the others that I possess are generally too precious to risk blending, because I have to wait until the next blue moon, when I generally order more tea, to get more), and I think that I’ve found the perfect blend. I’m almost always in the mood for this one.

The two teas in this blend are French Spice Quartet and Cha Yen Thai, both from Teavana. Both are spicy-sweet teas, but one is a rooibos/black mix and the other is an oolong, which works to my advantage. I like that there isn’t too much rooibos, because it can kinda take over the flavor, and I like that there’s some oolong in there, because, well, oolong is fantastic. The coconut flavor of the Cha Yen Thai smooths over the jagged edges of all those spices—peppercorns, cardamom, cloves, cinnamon, ginger, and a few others—creating a refreshing palate that isn’t quite as heavy as chai. Basically, if you’re like me and you LOVE LOVE LOVE chai, but sometimes you’re just not in the mood for something that rich, then this is a good happy alternative. :)

This tea smells like everything that is right with the world. I first received this tea as part of a Christmas present along with several other Teavana teas. I immediately opened all of the bags and then spent the next few hours just smelling and drinking the delicious teas! It was wonderful! All of the teas were great, but this one stood out especially.

When I first smelled this tea, it reminded me of the library in fall. The spices in this tea create a combination of flavors and smells that are reminiscent of old books, dry leaves, and antiques. All of my favorite things combined in one great tea!

I was apprehensive to taste the tea though. I was curious to see how the spicy, homey scent would translate to taste. I was not disappointed. The spice combination in this tea is lovely! It may be because I love cloves, but this is one of my favorite teas!

I just ordered some of this tea, having remembered really liking it, but I don’t like it so much now. It is heavily spiced, with enough pepper to scare any cold away, I’m sure, but this isn’t how I remember it. I think, having had a swap sample, that what I tasted before resulted from not being fresh out of a new bag. This is one potent tea, and the ginger is stronger than I remember too. I could let the tea sit for a while, hoping to recreate what I enjoyed before, but I’m too annoyed that Teavana is so attached to artificial flavoring. I thought this one was free of it, but I was wrong. Why is it necessary? This tea has just about every spice known to man in it, why do they need to add artificial flavor too? frustrating.

I do make exceptions here and there for the rogue artificially flavored tea (or food) because there are a few flavors that really do come out better that way (key word few). Teavana is like artificial flavor paradise. . .sigh

I am seeking entertainment that doesn’t require me getting off the couch this morning, so youngest is serving as my barista and bringing me tea. This is a sample from ThePurrfectCup. Many thanks!

The description of the tea really says it all. There are lots of spices in this and they are true to what you would expect them to be. They are strong enough, though, that I am not able to detect that the base is oolong and puer. I do not claim to have the most sensitive palate in the world, so maybe other people would pick up on that right away!

If you like chai spices, you would like this, and this is just the season for something so warming.

Freebie #3 from Teavana after purchasing a Breville from them.

Pungent-smelling as I opened the bag, and I assumed there was some form of anise in it from the smell. Nopers, I’m wrong (yep, I checked). Can smell the nutmeg and cloves quite strongly, both steeped and dry. Very chai-like.

There’s a dry smoothness upon tasting, and while pleasant, it’s faint at first sip. I like a more “punch in yer face, I’m gonna smack you with awesomeness” kind of flavor. So, I added a bit of Truvia. Would do well with a bit of cream as well.

The ginger becomes more apparent as you wait… obviously, I’m a bit lacking in the patience department. Surprised that it’s an oolong. If I didn’t read the package, I’d think it was only herbal. Has a nice kick that’s making my nose run, which is always a good thing in my books. I’ll definitely finish this bag, however I’ll probably buy other chai-like oolongs instead in the future.

I’m the only one of all my co-workers who likes this, though I have some friends and guests who love it. During our tasting last fall I got both cups of this, sweetened and unsweetened. I must say the rock sugar gives it more of a holiday spice feel rather than the earthy culinary spice feel it has without. It is very clove and pepper dominant and leaves the whole body feeling warm and buzzing, this physical sensation is why I come back to it.

While for the last couple months I’ve been drinking mostly straight tea there are a few flavored oolongs I decide to brew every now and then. Monday it was French Spice Quartet. I was surprised to get three infusions out of it and Was pleased at how large the oolong leaves unfurled. I have yet to try a straight pu-erh though I have several samples, but there is a nice earthy punch in there that doesn’t seem to come from the oolong or spices. This time the blend was less warming and more churning, I had three 16 oz servings before a very late lunch and my stomach seemed to be nawing on itself, perhaps aided by the digestive properties of the oolong and pu-erh.

Overall a very interesting blend, not a chai masala and not a dessert spice tea. It is strong and not for everyone. I’m not sure if it will last past this year, but I’ll enjoy it while I can, next time after a meal.

Definitely one of the better one’s that Teavana has masterminded.

I’ve been drinking this tea for most of the day. I love the spices in it. Yet, it has a soothing taste to it.

Try it iced and unsweetened. So good!

I love spicy teas, and this did not disappoint. A lot of Teavana’s flavored teas are light on the actual tea leaves, but this wasn’t. The flavor was nice and strong, even if not terribly smooth. Clove is the dominant flavor here, backed by pepper. The vanilla is subtle and not overwhelming, which I had originally worried about.

This will be a perfect Fall/Winter tea.

With a name that has spice right in the middle, it sure does live up to it. The smell of rich sweet spices just explodes from the bag. I can tell I am going to like this tea.

And indeed, I was right. This tea explodes in your mouth with sweet flavors and spices. Of course, the ginger, cloves and pepper are most prominent, but the vanilla and peppermint sweeten and soften. This gives me the impression of a traditional but not so overbearing chai blend.

Probably because of the candied pineapple and certain spices, this has a tropical tinge, which gives this a non conventional flavor. The blend is quite interesting, because of the richness of each side, you are hit with a wide spectrum of flavors and sensations.

I like this tea. Diving in and out of convention and tradition is exciting, if just for a fleeting steep or two.