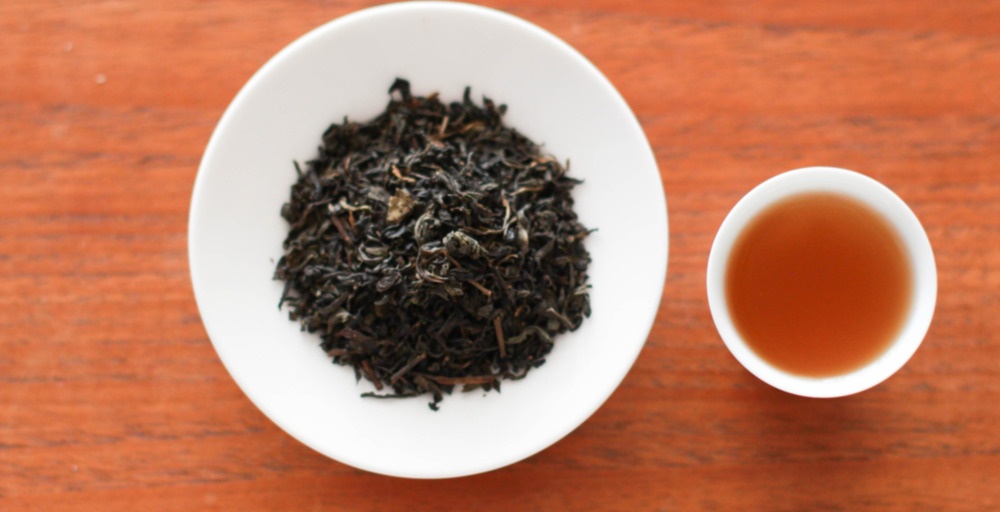 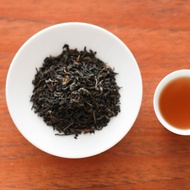 This dark tea, or Hei cha, is a lesser known cousin to pu-erh, which also undergoes fermentation after processing. Deep and slightly smoky, this tea is enigmatic and continues to develop over many infusions.

Here’s Hoping Teabox – Round Six – Tea #37
I expected this to be strong and DARK. But it is actually quite mild. I had one dark tea before and it was much stronger than this. It’s unique anyway. There is less charcoal flavor than a roasted oolong. I don’t notice any smokiness mentioned in the description either. I think this one might be TOO light for me though. Quite a bright, fresh flavor actually with a light copper brew. Anyone in the teabox, don’t be afraid of this one! I think you’ll be pleasantly surprised.
Steep #1 // 2 teaspoons for a full mug// 10 minutes after boiling // 3 minute steep
Steep #2 // 10 minutes after boiling // 3-4 minute steep

Here’s my full-length review on this one: http://sororiteasisters.com/2014/04/16/hunan-dark-tea-tea-source/

My first infusion: I could taste notes of fermentation. In my tasting notes, I mentioned that it tasted a bit to me like a grape-y balsamic vinegar that has been thinned with wine. Earthy, but not as earthy as a typical pu-erh. There is a sweet, creamy note to it, I compared it to a vanilla frosting sort of taste. Honey and molasses. Remarkably smooth and mild.

My second infusion: Sweeter than the first cup, but not quite as creamy in taste and texture. Honey notes remain, and I’m noticing mineral and vegetative notes emerging.

An earthy tea, greeting with a light pucker in the front and relaxing into a woodsy finish. Some trace notes of bitter chocolate deep in the undertones adds subtle body. Second steeping reveals a creamy texture and sweeter, fuller body. An enjoyable path to explore as the tea develops over multiple steeps. 7.5/10

Another packet from the Steepster Select box. Opened it up and took a sniff. Smells quite nice and the leaves are a pretty deep green that has almost blue tones to it.

Brewed it up in my all-purpose white teapot, drinking from a small Japanese cup.

Drinking it straight for now, since I have never tried it before.

First cup: it kinda just seems like black tea to me. I can’t detect a difference between it and something that’s “just” a black. I have no idea what “mahogany notes” should taste like, so ignoring that for now. Not getting any grape.

Second cup: ok, I get grape a little.

Third cup: Not unpleasant, and I’m happy to try something pu-erh related that I do not dislike (the track record has not been good thus far), but I don’t really find it to be anything unique about it.

Fourth cup: switched to a mug and did splenda and half & half. Definitely still getting the grape.

Verdict: Not bad but not something that makes me sit up and take notice. Not clicking the “would you recommend” option because it’s not a tea that I would tell anyone “Oh, you have to try this!” but it’s not something I would warn anyone away from – if offered a pot of it, I would have no hesitation in drinking it, I just don’t need it for my cupboard.

This has a nice, dark brew colour. (It’s like the Petite Sirah of tea.) The scent is kinda of malty caramel. There is more of a molasses flavour. I only get a hint of the grapes. Not a type of tea I’ve had before, but this is really good. Went well with my French toast.

This tea was a little weird. Unusal is probably a better word. Like no other straight tea I have had so far.

I expected it to brew pretty dark but it didn’t. It had this very curious color that was brown, yellow and dark green, all of these at once. I know it doesn’t sound appetizing, but it was actually really pretty. The aroma was mostly earthy with very strong grape notes. This is the first time I smelled grapes so distinctly in a tea.

The flavor was very bold and unique. Kind of like… if you kept your green/oolong tea leaves out because you wanted to resteep them but then you forgot about them and the next time you got to them, the leaves were getting a bit damp and perhaps even moldy, but you steeped them anyway ;D Sounds horrible, but that’s how it tasted and it was good! While it is not something I would like to have in my cupboard, it was definitely very interesting to check out.

This is does not have a strong flavor, but still retains many of the unique profiles you find with fermented teas. In fact, this would make a good replacement for coffee.

This is my first pu-erh tea and I really like it! I’ve been hesitant to try it because i’m not into strong, pungent flavors but this is actually relatively smooth and quite delicious. I’m starting to tread softly into the realm of dark teas and boy is it exciting.

I won’t get into tasting notes, the experience is different for every drinker in my opinion.

Soooo…. it tastes good. I get that oolong sort of taste from it. I wish my taste buds were better because I don’t really get all the tastes like grape or whatnot. It’s good though. Ah, Happy Easter! Tea and chocolate bunnies :). I did 2 steeps, I don’t know how people do more I just can’t drink that much.

My second tea from Steepster Select and a second hit! Packaging said this was good for 5+ resteeps, but I have to say it was only good for 3 cups for me. Three delicious cups.