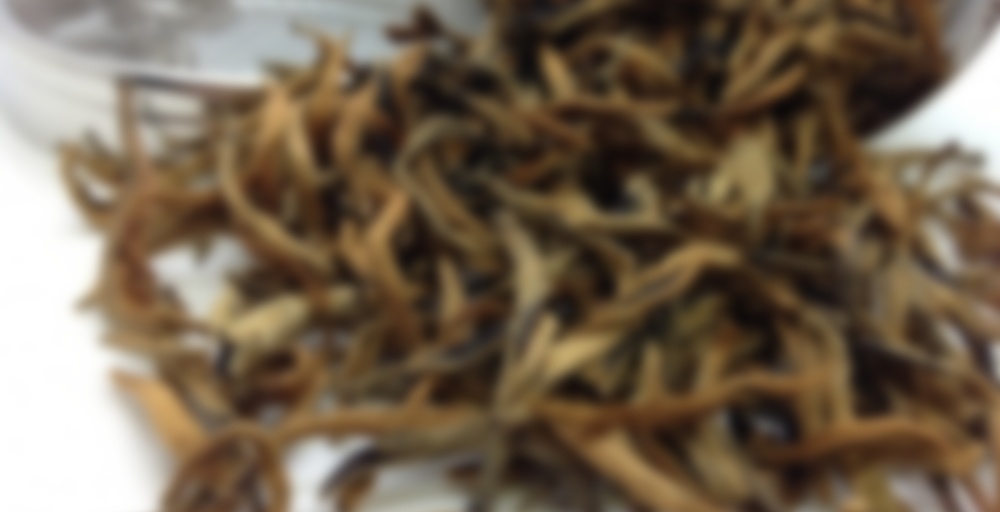 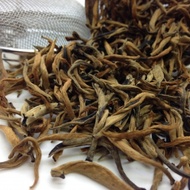 This is a spring batch of pure old tree black tea from Mengku area of Lincang in Yunnan, where it has one of the biggest acreage of old tea trees.

I’ve been out of town for a few days playing gigs so I haven’t had the opportunity to drink any real tea. I’ll make up for that now. This tea is a tea lover’s tea.

Remember Sonic The Hedgehog? Remember his friend Tails? This tea looks like a bunch of Tails’ tails. Golden and furry! They look like little dried fox tails. Dry leaf smell is kind of like a cross between cocoa powder, cardamom, and turmeric. The same goes for the steeping aroma but with cinnamon as well.

It certainly has some assam flavors, though I don’t know if it actually is an assam. It’s definitely more on the Chinese side of black tea flavor than the Indian side, but the assam aspect is there. It has a medium amount of maltyness, and medium thickness of texture. It’s floral but also caramely.
The flavors are complex but delicate. There’s a lot there but you really have to search for it. I like that in tea.

This is a very good Dian Hong. I am aware that there are some seriously mind blowing Dian-Hongs out there, but this one is nothing to sneeze at. Sticky furry buds ya’ll.

EDIT: Since it’s cooled off a little it’s a much thicker creamy texture.

This sounds really tasty! I also had a busy weekend playing gigs :)
It’s always nice to have awesome teas to come home to!

Well, I bought an electric kettle to use on the road but I always forget to bring it. I bring tea bags but I never travel with the good stuff.

Ah, musicians who actually gig. I couldn’t deal and now exclusively teach. Much better for my state of mind. Hats off to you guys.

I’m so heavily booked locally that I don’t travel much, although I have a stainless steel electric kettle for when I do. The biggest bummer of tea on the road is the terrible water you end up with.

The majority of my gigs are out of state, and I go all over the country. I do bring tea bags with me but only for emergencies. It’s cool when I end up in places with great tea houses, but usually it’s tea from a coffee shop and their selection is never as good as mine.

But yes Terri, water in some places is very very bad. Especially Cleveland.

Got this one from Terri!
Soo not sure what to make of this one…it mainly reminds me of wood…not like the normal wood I usually get in black teas…but like….a more drinkable wood? Like the wood isn’t the only flavor. The texture is really thick, almost kinda creamy in fact. And there’s hints of bread in the background of each sip. It’s a very odd tea for me.
I’m honestly not sure what to make of it. It’s not bad, but it’s not great either. It’s just interesting. I would try it again, but I don’t think it’s something that I’ll ever crave.
Thank you so much for letting me try this one, Terri! Glad i tried it! :D

I’ve realized a few things. The main one is that I need to quit trying to review new teas when I’m spending the weekend at Tony’s, except maybe in the dead of winter when there is snow on the ground. I think there are 2 reasons, & both of them effect my sense of smell & taste. The first is simply that my allergies are worse at his house. He uses a window unit for air conditioning in the bedroom, so I always wake up congested & with a funky taste in my mouth, because airborne crap comes right in. It’s an old brick house, & would be a major ordeal to route the central air to the attic. I can handle being outside in that stuff for a few hours at a time, as long as I can go into my air conditioned house to decompress, but sleeping with it all night sucks.
Reason number 2, his water filter is also the really cheap kind. To clarify, When I buy something, i do a little research first, & I tend to buy the best quality of that thing that I can afford. This applies to water filters, cars, etc.
Don’t tell Tony I’m complaining, it will hurt his feelings. He really is the most wonderful man in the world, but if we ever actually move in together, these are a few points I’ll be adamant about.

Having said all of that, this tea was sent by our dear TeaFairy, & I should not be drinking it, because I know it’s much better than what I’m getting. I’d like to apologize for all the lame reviews I’ve written over the last several weekends for teas from various friends. I doubt that I did them justice.

This reminds me – I need to order a new filter for the water dispenser in the fridge. It’s sad that we can’t get the cup of tea we know the leaves have the potential to be :)

@ Sil :ppppp""
Speaking of bad water & air, I’m going to visit my folks in Apopka, FL in July. The water there is AWEFULL, along with my allergies. I should probably just bring crappy teas I don’t care about, but I don’t have any, LOL.

Oh lordy, I used to live in North Florida. We had good water, but we had a softener system on it. Bad water in Florida can be really nasty. You have my sympathies!

Their tap water is pretty high in in surphur & other minerals.
As much as I detest bottled water, I always buy a case of it upon arrival. Before I put it in the kettle, I dump it back & forth between 2 cups a couple of times, in an effort to add some oxygen to it.

This is an awesome, fantastic black tea. Love it. Added to my wishlist to remind me to buy some with my next Tealux order.
Thank you TheTeaFairy for sharing this wonderful tea with me.

It’s awesome, I really like it too, and it’s beautiful to look at.