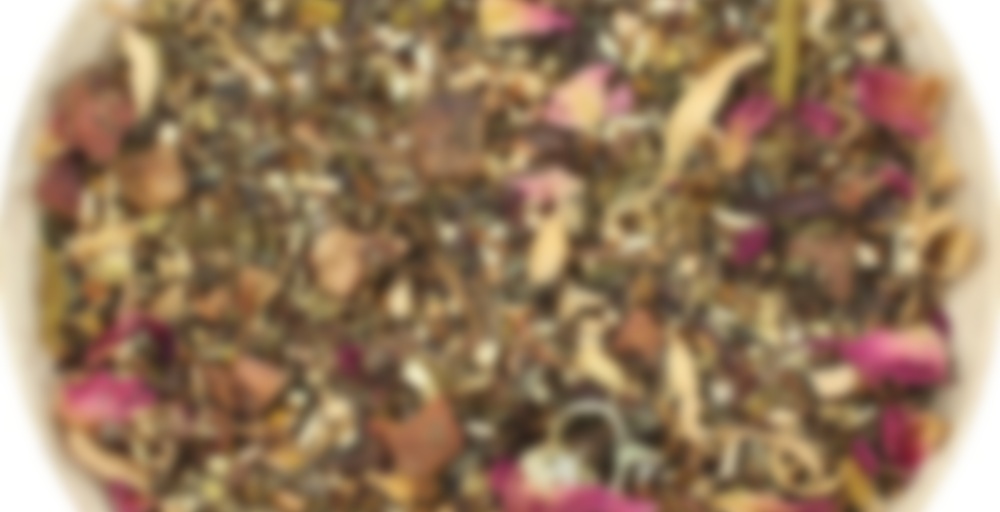 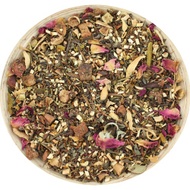 Drink this tea and you’ll feel like you’ve just been sprinkled with fairy dust, it’s so good. With notes of strawberry and kiwi, this blend of green rooibos, apple, strawberry, kiwi, orange blossoms, elderflower, and mistletoe, is our favourite way to escape to never never land once (or twice) a day.

So yesterday my wife and I headed downtown and decided to give Tealish another chance after talking to the owner about some of the issues we’d had with the store. We picked up 7 bags of tea, well, 6 bags and a cup to go, but as we were waiting for the streetcar, the wife decided she needed a bag of that as well XD.

One of those teas was this lovely little number. After disclosing that I have over 250 teas in my cupboard, my wife mentioned we should make a spread sheet of them: Tea name, company name, how much I have, and where it is in my tea storage system.

So we did. It took us three hours, but I had a cup of this while we were working and it is beyond delicious. It’s so fruity and light and yummy! I definitely see this becoming a favorite, and I do need to try it iced. The rooibos isn’t overpowering at all, and the strawberry and kiwi mix together beautifully. Awesome, awesome tea.

Boiling 3 min, 0 sec
Yours I Like This
7 likes
4 comments
Edit

I am impressed by your tea spreadsheet! Now that’s organization!

250 teas, wow! I too am impressed by a tea spreadsheet

I want David’s Tea to make a strawberry kiwi tea – mostly because DT is accesible.

It becomes necessary with this number of teas. The final count, not counting most bagged teas, is 210. With more on the way. >.<

Uniquity, have a look at my swap list in the swap thread and let me know if there’s anything else you want, I’d be happy to send some Fairy Dust your way!

Thank you DaisyChubb for sending me some of this rooibos! YUM!

This is really good. The strawberry notes are especially strong, not just from the strawberry I suspect, but also from the kiwi which in my opinion tastes a bit like a cross between a strawberry and a melon. I taste hints of floral in the background, not strong, but, just enough to keep the palate interested in what’s going on back there. The overall cup is light, juicy and refreshing.

I should get this for my granddaughter, she’s got a set of fairy wings. She’s 18!

Yes this is such a delicious rooibos!! Thank you again Tealish!

The thing I appreciate most about this tea is how real the fruit smells when you stick your nose in. Strawberry kiwi fairy-heaven. The fruit taste is real too – I had a 4 minute steep because I couldn’t wait any longer and it was not light on flavour at all. A great companion tea if you’re a Green and Fruity fan!

It’s gorgeous too, little curls and pretty colours. This would be such a hit with my little niece – I think I will bring it home for Christmas.
Can’t wait to coldbrew this one, all I can say is this was a huge hit with Mike and also this would make amazing popsicles and also… this tea. rocks.

I want to marry this tea.

…have you tried the milk oolong yet? I’m dying to know how it is!

Not yet! I’m so bad :(
I was super full after lunch today too D: rest assured I can drink caffiene all day tomorrow, it being friday, so I will log it as son as I take my first sip!

I second that notion! I’ve wanted to know how milk oolong from this place is for ages!!

I am holding you to that! ;). We’re heading out there on Sunday, I’m hoping it’s good!

I saw one of Tealish’s new teas was named Fairy Dust and knew I was interested. And THEN I read the description: strawberry-kiwi green rooibos? Yes, please! The man of the house got a hair cut today down near Tealish and I had him stop in for some Fairy Dust on his way home. I have a tea courier now, and am feeling pretty victorious.

This is suitably awesome. It’s a vivaciously flavourful little blend, but not too sweet. There are some great flavoured blends out there that I like a lot but end up finding too sweet-tasting to drink regularly. This one keeps the earthiness of the green rooibos. It smells great both dry and infused, but actually more strongly once steeped. I can pick out both all the individual fruit scents. Perhaps my new favourite rooibos!

Thanks Aimee Popovacki for including this in our swap :)

I’m actually finding this one enjoyable. I wouldn’t order it for myself, but that I can make it through an entire cup of rooibos is saying something! I’m thinking it’s because it has green rooibos, which I don’t find nearly as offensive as it’s red sibling (cousin?).

The more I drink, the more impressed I actually am with this tea. I’m definitely getting the kiwi and apple in the flavours, and perhaps a hint of strawberry. I’ve no idea what mistletoe tastes like, but I just like the idea of it being in there haha!

I can’t get over how much I adore this tea! It is so light and fruity, naturally sweet, and just plain refreshing! I give it a moderate steep time with no extra sweetener and just really let it work its own magic. This is a tea I could see myself bringing to work more often! It is versatile, really just not fussy or temperamental. (Basically perfect for having to brew at work!)

My wife hasn’t been able to stop raving about this tea so I guess it’s about time I tried it. It was okay, but not really to my taste. Too sweet and too fruity, but that’s exactly what she likes. It’s a no from me, which just leaves more for her!

Good green rooibos base with rose petals, green fruity flavours (honey dew, green melon). It is very fragrant, a decent iced drink this evening when it’s too hot to exist above ground.

variaTEA sent this one my way and it’s not half bad. this is very much a fruity sort of melon punch tea. I enjoyed a couple of cups of this today. Happy to have tried this.

Thank you to VariaTEA for the tea sample!

Apart from the Ceylon tea comparison cuppings that I had to do for class today, this is probably the only tea I drank today that I didn’t pick out because of the rainy weather. And honestly, that’s mostly because I already had the pitcher going in the fridge so it was more a selection driven by convenience.

I think this MIGHT be my first tea from Tealish? I’ve tried over a thousand different teas now and some just don’t make an impression and so they just slip through the cracks of my memory. But I have to say, that this is a company whose name definitely sounded foreign to me when I was prepping the cold brew of this one. I think it was a nice selection for a first offering from them though.

The flavour profile was nice overall, if not rather Spring/Summery in vibes which was admittedly a bit of a mismatch with the weather. I swear; at one time there was a point where I didn’t view teas so seasonally but that has since changed… a lot.

The dry aroma and the smell of the strained, infused liquor is quite potent though: really effervescent notes of green melon/honeydew that takes me back to the vibrancy of Lupicia’s Golden Honeydew. That’s really promising given that they even share a green rooibos base. Now, I do have to say that the same brightness of flavour doesn’t perfectly translate to the taste: the melon is a lot more muted than the aroma would lead you to believe, and it’s cut with other fruity notes like strawberry and kiwi. But the flavour that does come through is smooth, natural and pleasant and I’m really enjoying the strawberry notes accompanying it in particular. It reminds me of something but I’m struggling to place exactly what. Sadly, the base is just a little too potent to completely sink into the cuppa without distractions.

So, now that it’s officially October we’ve started playing our Halloween soundtrack over the speakers at work ‘cause holy fuck do thrift stores push Halloween. It’s busier for us than Christmas, by A LOT. This is one of the songs in the Halloween rotation, along with other ‘gems’ like the Adam’s Family theme song, The Monster Mash, the Ghostbuster’s theme song, and Thomas Dolby’s ‘She Blinded Me With Science’. Finding Halloween music is apparently a bit of a stretch. But this song is SUPER catchy; and so I added it into my tea music rotation figuring I’d eventually pair it with a more Halloween like tea; you know a Pumpkin Spice thing or something that reminded me of Halloween candy?

Instead I found it fit the magical, sort of whimsical nature of this blend. I mean, it is named after fairies. That counts! Right…?

I’m surprised you got a lot of base because I don’t get any of it when I drink the tea. Gotta love how everyone tastes things differently.