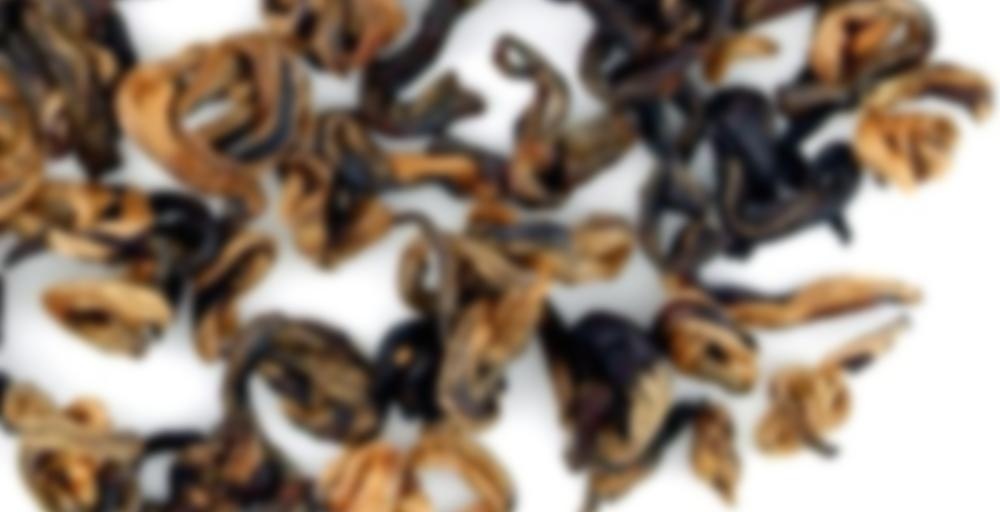 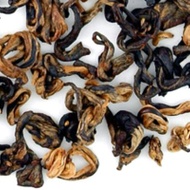 Tightly rolled curls shine with their golden buds. The unfurling leaves in the cup are a sight to behold as the dark amber infusion builds intensity. Malty honey and spicy tobacco notes give way to a truffle-like dampness that lingers pleasantly on your palate. Complex and rewarding.

Given that this tea almost looks like gun powder green when dry, I was extremely dubious about the two minute steep that TG recommends.

The color of this dry leaf is the kind of thing that makes you “get” why people become obsessed with amber jewelry. You know, the real stuff, the gnarly old stuff with four million year old mosquitoes fossilized in it. The stuff that looks like you live in a world of frozen honey.

The nose of the dry leaf evokes a similar sense of a slowly oozing, encompassing world of honey, and yet, not sweet.

Despite my concerns, the two minute steep produced a deep, dark brew. The color is like amber buckwheat honey (seeing a trend here?)

The nose on the brew also immediately makes me think of buckwheat honey. Also the tiff, sourdough flat bread you get in Ethiopian restaurants.

And yet, the notes on the tongue are not sweet at all! Astringent without being bitter, again, that tiff sourdough tang, not malty, almost hoppy, like an IPA or hefeweizen.

Given the short steep, I expect later steeps to open up some more subtle notes. I just hope I got all the water out of the pot into my cup so the leaves aren’t sitting there oozing bitter tannins on me.

For being a “mere” GOP, this tea has a lot going on.

Btw: The batch I got is clearly nothing like the batch that “teatimetuesday” got. Even the dry leaf looks nothing like what is in his photos. In fact, his photos don’t match the website photo, either, which makes me wonder if he got an off batch.

Definitely risky business in the single non-blended teas. However when it pays off, it can be a wonderous event. I had the very same sourdough bread in an Ethiopian restaurant that you spoke of. Several years ago while in college in Boston, and the restuarant was on Mass. Ave in Cambridge. Anyway, I diverge so easily. Sounds like a lot of yeasty vibes going on with this tea! :)

I know exactly the restaurant you mean. :-) I was in several bands from the mid-90’s through mid-00’s and our most common gigs were along Mass Ave. either in Cambridge or Somerville.

Oddly enough, it wasn’t the yeasty aspects I was thinking of when referencing either the bread or the beer, but rather the tiff itself (which is a lot like buckwheat) and the hops. Definitely not smelling or tasting yeast in here. Wow, that would be SO odd. :)

Cheers! I went to Berklee from 94-99. What a college town – loved it, just not the weather. ;) Any chance we could have crossed paths? Still in music, just out in LA now. Small world.

Well, I was in that area from 91 through 07, but it seems like you left just as my primary band was “making the scene” so probably not. Unless the name Scissorkiss rings a bell.

Yeah, sounds like we missed each other. I’ll check out your site. My meager one-dimensional site is www.anjmusicproductions.net no music examples. Just a list of credits.

I would LOVE to get into sound tracking for films or TV or video games or whatever. I was working with a guy in Chicago to sound track a documentary he was making, but he seems to have flaked on me. I know that this is a very competitive thing into which to break, but if you hear anything you like at .d88b. keep me in mind =)

Will do. :) Writing for film and tv is all about relationship building with directors and producers. It takes a while, but eventually pays off. Might be different in the East Coast. That’s how it seems to work out here in the West.

The name of that flatbread is called ‘injera’ :-)

Yes, I figured that out, later. Tiff/Teff is the type of flour it is made from. Oops.

This is a bit more mellow than I expected but it’s still tasty. It’s more smooth than chewy and I guess I was thinking chewy. After I switch from what I expected to what it actually IS – I find that I really do like the taste and as it cools it’s almost juicy. The color is more of what I would compare to an oolong.

I’m in the process of drinking my second steep…smells insanely tasty. I see this tea pairing well with a caramel dessert or a rib eye steak. It’s dark and stormy, and the description is pretty accurate, along with everyone’s reviews. When it cools, the flavors deepen. The back of my tongue gets that tobacco tastes. Really full of surprises, reminds me of a bold red wine that opens up.

I love how tea leaves uncurl, just a simple little show. It reminds me of those capsules from when I was younger, you dunk it in water, than it unfurls to be a foam dinosaur! Just as fun, though I am easy to entertain!

Boiling 2 min, 0 sec
Yours I Like This
5 likes
0 comments
Edit

Dry tea, curled like a brown-’n-gold bi lo chun and an aroma like baking cookies or hot creamed corn, made me hungry. Liquor also smells like sweet pastry, but flavor is more earthy, mushroomy, with a little tobacco bite on the tongue, slight astringency. Next time I might try using less tea or making the first steep shorter — 1:30 might be just fine.

Yipes! Second steep just as strong. I should weigh the tea next time. Since it is curled up, it’s easy to use too much. Fragrance of 2nd brew is nice brown sugar and the liquor taste has less pungency than the first round. AND a passable 3rd steep — this is some powerful tea!

Boiling 2 min, 0 sec
Yours I Like This
5 likes
0 comments
Edit

The description was correct. Very woodsy with hints of truffles. Unique

This tea for me is relatively plain. It is not robust in flavor; however, after savoring, this tea began to unfold in complexity (and definitely began to grow on me). As the description says, there is a certain truffle aroma to it. This tea is very low in astringency and briskness. It has a light body and lingers on the palate pleasantly with a certain dampness, as opposed to a dryness you may perceive with an umami type. The liquor is a bright orange and the leaves are tightly rolled with a golden brown color and, after steeping, unfurl to a larger leaf (similar to what I would see in an oolong).

This tea smells amazing. A bit astringent, but smooth in texture and generally mellow in flavor. Given the sweet honey aroma of the dried leaves, I had expected to find a similar taste in my cup, but was not disappointed with the resulting brew. Adding a few drops of honey makes this a great cup to wake up to.

Boiling 2 min, 0 sec
Yours I Like This
0 likes
0 comments
Edit